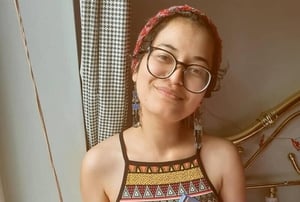 I never had the consciousness that I have a difficult name until I came to Ireland. When people here would ask me my name, I knew I would have to repeat it, sometimes over and over again. Sometimes someone would just pronounce half of it and let the rest of my name trail over in a murmur and I would not correct them. I was tired of correcting them.

I guess I was a little embarrassed too. I wished my mother had kept an 'easy' name. Back home, people would not just simply ask your name but also the meaning of it. So, I had memorized my mother's answer as a little girl. "Bhargabi is another name for Goddess Parvati, the wife of Shiva. In some myths, Bhargavi is also considered the daughter of the Sun God." I would try imitating the tone and hand gestures of my mother while answering in front of awe-struck friends as a girl.

But here, it looks like no one is interested to know the history and magnanimity behind my name. My mother often used to tell us how our names finally got decided. In India, you see, we have a name giving ceremony, particularly among the upper-caste Hindus. After confirming the time and date of birth, a priest would prepare an astrological chart and the beginning letter of the child’s name is decided according to that.

On a chilly Irish morning, I was wondering how it has been ages that I have actually repeated that story. People here shorten their names so often. I did not know where to trim my name. Should it be 'Bhar’, ‘Gabi’, ‘Bhargs’? Each time the shortened name would sound stupid and I would drop the idea.

On some phone calls, I have even asked my mother why couldn’t she have given me an easier name? "How about Meera or Sita?" I would say. Each time, she would have a legend in hand to tell me why that name is absolutely not meant for me – "Did you know Devi Sita had to go so much suffering at the hands of so many men that she dearly loved? It was post which, Sita before sacrificing herself, forbade people to keep women named Sita. Do you want to also go through such a fate at the hands of men? Huh?"

I wanted to scream at her saying that men can be brutal, even if you are named Sita or not! But I guess that line of thinking also encourages a sentiment where people are disinterested with a name’s meaning, its history and stories attached to it.

I decided to introduce myself as ‘Vili’, a name that is also termed as a nickname in my culture. I am called ‘Vili’ amongst my family and ‘Vili’ is an easy name - easy enough not to be asked twice. I was fine until one of my professors suddenly asked "is Vili your actual name?" I said no, but it's fine, it's my nickname. He was not satisfied and asked "what do you want to be called?"

I have never been asked that question before - not here, not back home. A friend in Paris once told me that the literal translation of ‘what is your name?’ in French is ‘what do you call yourself?’. I think this is beautiful because it gives agency in a way to the person to pick a term that the person finds best suited to be identified with or called out.

In his book Neither Settler Nor Native, Mahmood Mamdani talks about settlers in America shortened Indian names because they could not pronounce them and they wanted Indian natives to be legible for the state. Shortening of native names was also one way to make them ‘civilised’ and ‘docile’, a way to control them. Just like young men were prescribed to not keep long hair, it was a way to cut away the native history and create new narratives of power.

Shortening of native names was also one way to make them 'civilised' and ‘docile’, a way to control them

This reminds me of how colonialism led to the Anglicisation of Irish names as people rapidly dropped off Irish sounding names to avoid stereotyping, harassment and loss of jobs. I have been told how certain Irish names as Gaeilge are going out of usage due to ‘difficulty’ in pronouncing them.

I see my growing consciousness of having a difficult name in the light of this. When I say that I have a difficult name, I should also ask in the same breath: difficult for who? And difficult for what reasons? As Irish society becomes more diverse, this diversity will bring its own culture and history. The beauty of the diverse times ahead of this country is the organic osmosis of varied cultures.

The attempt of calling out names correctly is the beginning of that osmosis because with it you embrace a person’s history and their stories. It is time to decolonise our vocabularies and languages and a big step in this regard is to stop continuing colonial, racial practices of dictating how we are called. Our refusal to be ashamed of our names is how we can bury colonial leftovers. When Shakespeare asked 'what's in a name?’, well, it looks like everything.

Bhargabi Das is a PhD research student in the Anthropology Department at Maynooth University. She is an Irish Research Council awardee.