Opinion: Henry George's ideas about the human right to a home continue to hold relevance for today’s property problems in Ireland

By Niall Whelehan, University of Strathclyde and Eoin McLaughlin, UCC

Ireland is in the midst of a rental crisis. Rents in Dublin have almost doubled in the last decade, and rents outside the capital are up by a fifth. Rents are so high that they are close to half or more of take home pay. The number of households renting has increased by 66% between 2006 and 2011 and almost 40% of households in urban areas are renters.

In the decades after the Great Famine, Ireland went through a similar problem. Unaffordable rents and long-term insecurity are problems with a long history here. The solutions then were rent controls, rent reductions, and ultimately the transfer of ownership from landlords to tenants. Part of the success in action was social resistance and political unity. But they also had intellectual backing from one of the most influential economists of the 19th century: Henry George.

The 19th century saw the birth of the industrial age with its associated social problems. Of all the "isms" that date from this period, Georgism is one of the most relevant today, but the least well known. George’s ideas about the human right to a home continue to hold relevance for today’s property system in Ireland, which keeps secure housing out of reach of the people who need it.

An American economist who 'was terribly popular with the general public, but rather viciously attacked by academics', George became a worldwide best-selling author who sold more books than his contemporary peers, and was more well-known than even Karl Marx in some quarters. "People do not argue with the teaching of George," Leo Tolstoy believed, "they simply do not know it… for he who becomes acquainted with it cannot but agree".

In 1879, George published the international bestseller Progress and Poverty. The theme of the book was why, despite rapid technological improvements, were progress and poverty simultaneous phenomena in modern societies, a question that is still pertinent today. George saw the solution in radical land reform and the destruction of land monopolies. In Ireland, he hoped to start a revolution that would spread across the world.

In 1881, he came to Ireland and stayed for a year to support the campaign for tenants' rights in the Land War. In his pamphlet The Irish Land Question (1881), George made a clear distinction between private property in land and property in things that result from an individual's labour. Particularly important for him was that land was in fixed supply and increases in economic activity placed greater demands on it. 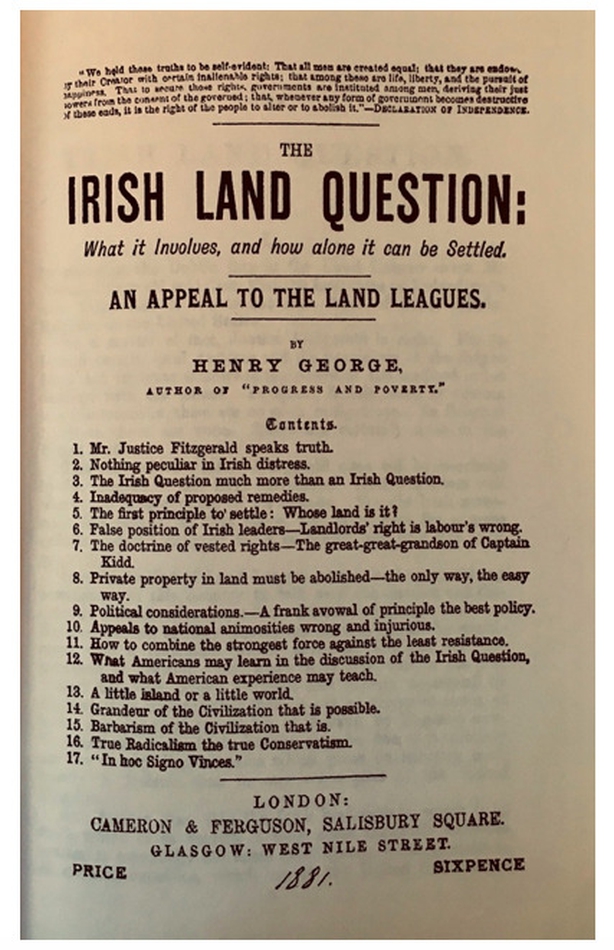 In Progress and Poverty, he noted that rent was "the price of monopoly, arising from the reduction to individual ownership of natural elements to which human exertion can neither produce nor increase". The appreciation in land values over time and, he maintained, accompanying rising rents were the result of the wider economic environment, not any particular labour or talent on the landlord’s behalf, excepting any improvements they make to the property. Landlords, then, did not merit this profit.

George argued that all rent should be paid as a land value tax for the common good and collected by the state. Indeed, all other taxes on goods and services would become unnecessary such would be the scale of this land tax. He asserted that "the way to make land common property is simply to take rent for the common benefit. And to do this, the easy way is to abolish one tax after another, until the whole weight of taxation falls upon the value of land".

For this system to work, George argued that land could not be privately owned. Instead, people would occupy it with secure tenure for their lifetimes if they wished, and would pay the land tax to do so. If they moved on, they would always be compensated for whatever improvements they made to the property. In this way, "the dogs in the manger who are now holding so much land they have no use for, in order to extract a high price from those who do want to use it, would be at once choked off".

George's ideas were considered radical when he came to Ireland and he was met with considerable opposition, yet he was given a hearing. Today, radical solutions to the housing crisis are met with more hostility from landlords and government (nearly half of whom are millionaires; something in common with 19th century governments) than they were in the 1880s. Ideas of human rights to housing are lost in discussions of marketplaces and providers.

Today, the Henry George Theorem is the label given to a situation where a single land tax is sufficient to fund urban public expenditure. While the theoretical validity of the Theorem has been supported by modern research, Ireland is yet to consider implementing anything of the sort advocated by George.

George combined ethical and economic language in his attacks on land monopolies, declaring that ‘economic law and moral law are essentially one’. Income derived from labour was ethical, but wealth derived from rent, the ‘unearned increment’, rather than hard work, was amoral because it ultimately robbed the value of labour by taking most of people’s earnings.

Part of the Land League's success was how they won that moral argument, and made the term ‘landlord’ itself a negative, dishonourable one: ‘landlord’s right is labor’s wrong’. The Georgist interpretation of rent is clearly not one represented in modern Ireland, as evident by the Tánaiste’s recent equivalence of landlord and tenant rights: ‘one person’s rent is another person’s income’.

Dr Niall Whelehan is a Lecturer in History at the University of Strathclyde, Glasgow. His new book Changing Land investigates the Irish Land War and Georgism. Dr Eoin McLaughlin is a Senior Lecturer in Economics at the Cork University Business School at UCC. He is a former Irish Research Council awardee.