Analysis: there are many parallels between Eurovision voting and regular election campaigns

Both of us love the Eurovision contest but, as members of the Electoral Geography Group (EGG) at Maynooth University (along with Dr. William Durkan), we are also interested in the contest for the similarities that exist between this and "regular" election campaigns.

National selection processes, where the different Eurovision countries select their acts and songs for that year's contest, often mirror the candidate selection contests of political parties. Both are sometimes prone to controversy and results are shaped by rules imposed for the selection process. Just like election candidates, selected acts often use the period before the contest to "campaign", or promote their entries, usually being strategic in terms of which countries they focus on. 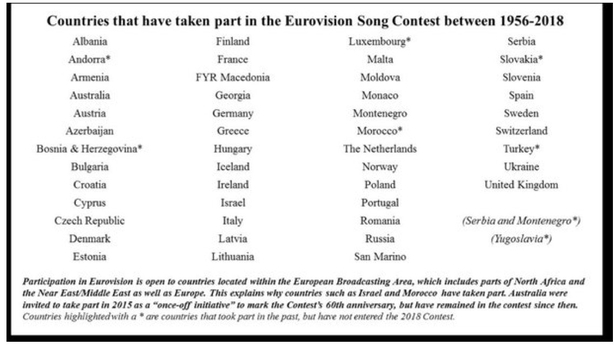 However, the most obvious parallels relate to Eurovision voting patterns. Some countries tend to award high numbers of points to the same countries on a regular basis. This was already a characteristic of the jury-voting era, which lasted until 1997, but a tendency towards "bloc voting" seems to have ramped up further with the introduction of televoting in the late 1990s. This prompted accusations of political voting in the 2000s and claims that different countries – particularly "new" Eurovision countries, such as Russia, Serbia and Turkey – had an unfair advantage due to "friends and neighbours" or "diaspora" voting. This brought about a re-introduction of juries in 2009.

Language is another factor to consider. Statistics suggest that songs performed in English have a better chance of success than those performed in other languages. Following the abolition of the native language rule in 1999, increasing numbers of countries opted to use English for their entries, with this trend peaking at the 2016 contest in which only three of the entries in a language other than English (including a French-language entry from Austria).

From RTÉ Radio 1's News At One, Adrian Kavanagh discusses the voting patterns and possibilities behind the 2020 Eurovision

However, the success of Portugal's Salvador Sobral with "Amar pelos dois" in 2017 lead to an increase in the number of entries performed in non-English languages sent to subsequent contests. While French chansons dominated the contest in the 1950s and 1960s, a song in the French language has not won Eurovision since Celine Dion won for Switzerland with "Ne Partez Pas Sans Moi" in Dublin in 1988. However, two French-language entries figure among the strong favourites in 2021 – Barbara Pravi's "Voila" (France) and Gjon Tear’s "Tout l’Univers" (Switzerland) – as well as the Italian language "Zitti E Buoni" from Italy's Måneskin.

Irrespective of the advantages that certain countries may attain due to "bloc voting" or language, recent results show it is still possible for any country to win Eurovision. In 2019, the Netherlands – a country that failed to qualify for the final eight times in a row between 2005 and 2012 – achieved their first win in the contest since 1975, while North Macedonia – a country that had never finished in the Top 10 in a Final up to that point– won the jury vote. This year sees an unusually large number of countries, who have never won Eurovision before, figuring among the contest favourites, including Bulgaria, Iceland, Malta, Lithuania and Cyprus.

READ: Douze points: the who, what and why of Eurovision voting

Returning to our discussion of the voting trends, simplistic views of televoting trends during the 2000s largely viewed these as being political. While it is fair to note that certain countries still tend to award high numbers of televote points to the same countries every year, these trends probably reflect factors such as shared music markets and cultural commonalities, rather than politics. In fact, it could be argued that the "real political voting" occurs with the juries, more so that the public vote, a discussion for a future Brainstorm article! 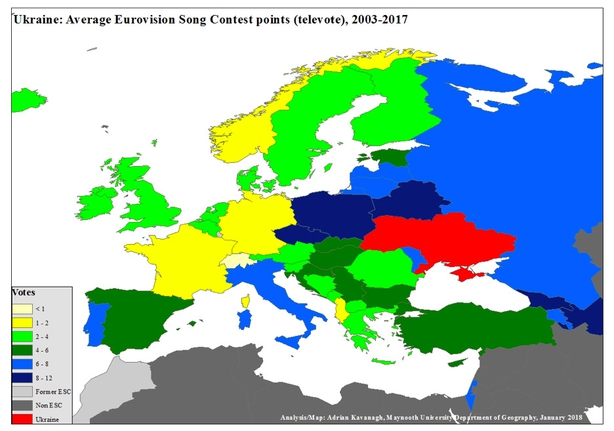 Looking at some examples of Eurovision voting patterns, Ukraine tends to win, on average, very high numbers of televote points from other former Soviet states, as well as their neighbours Poland. Other countries may also take advantage of a large diaspora vote, as is the case with Lithuania. While Lithuania is also a former Soviet state, it does not enjoy the same level of success as Ukraine and Russia in terms of winning points from other former Soviet states (with the exceptions of neighbours Latvia, and Georgia). However, the large Lithuanian diaspora in countries such as the United Kingdom and Ireland often ensures a significant number of televote points for the Lithuanian act from those countries. 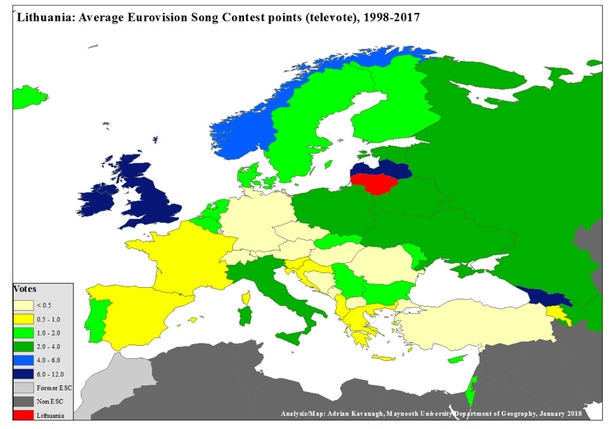 While Irish success levels at Eurovision dipped notably during the 2000s, Ireland too relies strongly on "friends and neighbours" voting when it comes to winning televote points at Eurovision. Since the introduction of televoting, the United Kingdom has been the most generous country by far for Irish Eurovision acts. While there is a distinct geography to Ireland's televote pattern, this is not wholly related to geographical proximity. Ireland fares well in winning points from the "Viking Bloc" states in north-western Europe (especially Denmark), but has struggled to win televote points from France during this same period. In fact, during the last two decades Ireland has tended to be more likely to win televote points from the Baltic States than they are to win points from some western European countries, including Italy and France. 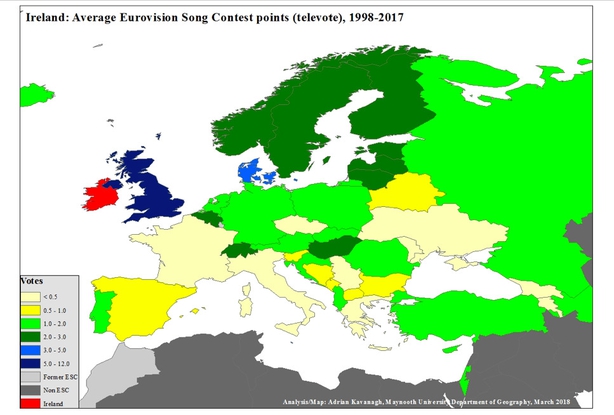 Since 2016, each country returns a separate set of televote and jury vote points. This allows for some interesting contrasts between jury vote and televote trends.

For some of the countries who finished in the Top 10 at the 2019 Final, there appears to be a significant disagreement in the ranking of these entries between both of the "judging panels". Norway's KEiiNO won the televote by a comfortable margin, but ultimately only finished in sixth place overall due to a much lower ranking from the professional juries. Similarly, acts from Iceland and Russia fared notably stronger with the televoters than they did with the juries. By contrast, North Macedonia’s Tamara Todevska won the jury vote, but only finished in seventh place overall, after finishing twelfth in the televote. As in previous contests, Sweden also fared notably stronger with jury voters.