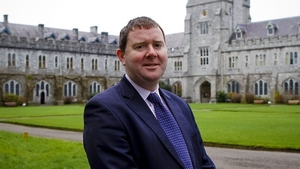 Analysis: Ireland is one of the few developed countries that has seen high income growth and falling inequality in the last 30 years

Taking data from a 2018 article in the Journal of Income Distribution, we can see just how much of an outlier Ireland's performance has been. In the three decades since the 1980s, Ireland is the only country in the sample to achieve to both high income growth and falling income inequality. 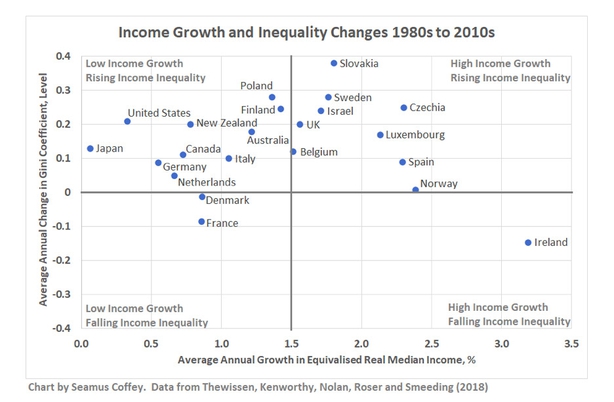 But this reduction in income inequality in Ireland gets little domestic coverage. This is surprising given how frequently inequality features on the op-ed pages of our newspapers and in discussions of policy and social outcomes on the broadcast media. At times, it seems like some contributors are more interested in outrage than outcomes and want to ignore the impact of policies perhaps because of their attitude to the people behind them.

Measuring inequality is a non-trivial task and there are many facets of inequality that impact peoples' lives. When used on its own, "inequality" is typically a shorthand for inequality in disposable income, the money available for households after the addition of social transfers, the deduction of taxes, and before any bills have been paid.

There are three key drivers to income inequality with numerous factors underlying each. The first driver is the distribution of market income, that is income earned from labour and capital. Next is the impact of social transfers such as state pensions, unemployment benefits and disability and caring income supports. Finally, there is the role of the income tax system which can be progressive with higher effective rates imposed on higher incomes.

One of the main reasons for growing inequality in developed countries is an increase in the inequality of market income. The offsetting impact of countries’ social transfers and income tax systems did not keep pace with this increase and there was a resultant rise in income inequality.

In Ireland, market income inequality rose but by less than in peer countries.There have been rises and falls as the economy ebbed and flowed, but the latest estimates show that Ireland’s gini coefficient for market income is somewhere around 0.52, not much changed from the 0.51 it was in 1987. This means that Ireland’s tax and transfer system has had to do much less to stand still and more of the impact of policy can go on reducing inequality.

As rising inequality is a global concern, shouldn't there be a wider understanding of how one of the few countries to generate a reduction in inequality achieved it?

Households with no market income rely on social transfers for their disposable income. In most countries, social transfers are doing more to reduce inequality now compared to their impact in the 1980s. However, a large amount of this is due to aging populations and an increasing role for pensions.

Ireland has a younger population and pensions make up a smaller share of our overall package of social transfers. Ireland stands out for the use of transfers related to family and children. In Ireland, the inequality impact of social transfers related to family and children has increased and in the 2010s reduced the gini coefficient by an additional 0.03 points compared to the impact of similar transfers in the 1980s.

This alone would have been more than enough to offset the modest increase in market income inequality in Ireland over the same period and lead to a reduction in equality, holding other things constant. But other things didn’t stay constant.

A further impact arises from changes in the tax system. Ireland has one of the most progressive income tax systems in the OECD and our tax system has a greater impact on the gini coefficient relative to all other OECD countries. A lot of this has been achieved in the last 30 years with changes to rates, bands and credits.

If policy has helped reduce inequality, the transformation of the economy has certainly helped increase income

If we put these three components together, we get the reasons behind the fall in inequality in Ireland over the past 30 years. In the 1980s, Ireland had a gini coefficient for disposable income of around 0.33. It is now estimated to be around 0.28 and income inequality in Ireland is below the averages for the EU and the OECD.

· Ireland experienced a smaller increase in market income inequality than most other high-income countries so less additional redistribution was needed to stand still.

· The impact of income taxes on reducing inequality increased in Ireland over the past 30 by more than in most other high-income countries.

If policy has helped reduce inequality, the transformation of the economy has certainly helped increase income. And combining the growth of household income with changes in inequality, as we did in the chart at the top, shows just how unique Ireland’s performance has been.

The outside world can see that income inequality has fallen in Ireland so isn't it time we saw it ourselves?

Of course, whether other countries want to go with Ireland’s flat-rated system of welfare and state pension payments, our increased use of child and family related social transfers and our tendency to take people "out of the tax net" is another matter. Countries may have priorities and objectives other than reducing income inequality that frame their policy choices.

They may wish to have pension systems where the benefits, and not just the contributions, are earnings related. They may wish to provide services for families and children rather than additional cash transfers. They may wish to have a broader tax base with tax collected across all income levels rather than being concentrated on the top. In many ways, these would be considered progressive choices, but they would likely lead to an increase in measurements of income inequality.

Everyone can have their own opinion on the best way forward, but they cannot have their own facts. Repeatedly stating that inequality is rising does not make it so. The outside world can see that income inequality has fallen in Ireland so isn’t it time we saw it ourselves?

Seamus Coffey is a lecturer in economics at UCC