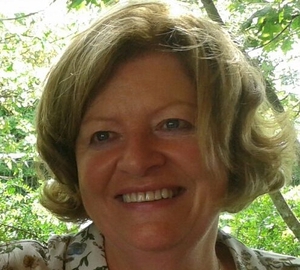 Analysis: the Irish Self-Determination League of Great Britain was the voice of Irish nationalism in the UK during those war years

The Irish Self-Determination League of Great Britain (ISDL) is not a name which trips lightly off the tongue nor indeed is it an organisation familiar to many in Ireland. But between 1919 and 1921, upwards of 27,000 of its members pursued a propaganda campaign in Britain aimed at promoting Irish independence. Founded in 1919 at the behest of Éamon de Valera, it was his intention that it would capitalise on the then popular concept of self-determination which had been first proposed by US president Woodrow Wilson in his plan for world peace after the First World War.

Its leader was Art O'Brien, a London-born electrical engineer, who had provided sterling support to Irish prisoners in Britain after the 1916 rising. A fluent Irish speaker and a prominent member of the Gaelic League, the Irish Volunteers and the IRB, he was also appointed envoy of Dáil Éireann in London in early 1919.

O’Brien was an extremely efficient organiser and, under his guidance, the ISDL members held information meetings about Ireland, circulated copies of the Irish Bulletin (Sinn Féin’s record of atrocities and outrages committed by the British army) and supported prisoners in British jails who had been transferred from Ireland for their revolutionary activities. They also raised funds for the Irish National Loan.

On February 11th 1920, 10,000 people gathered at a meeting at the Royal Albert Hall organised by the ISDL, with as many again outside unable to gain admission. The key speakers were Arthur Griffith and Eoin MacNeill who, rather surprisingly, travelled to London and stayed at the Jermyn Court Hotel unhindered by the British authorities. The programme for the meeting contained photographs of the key figures in Dáil Éireann and the phrase "Irish Republic" was prominent.

The Irish Times noted that the Sinn Féin flag was displayed from various parts of the balconies, while te Times reported that the audience rose and cheered when Griffith was welcomed as the "acting President of the Irish Republic" and declared that the Irish Republic was now in existence and that England was going to have a hostile enemy on her flank so long as she ruled Ireland by force. MacNeill declared that this was the 20th century and Ireland and the people of Ireland were not to be intimidated.

PJ Kelly, a Sinn Féin councillor from Liverpool and president of the ISDL, proposed that the meeting should recognise "the Irish Republic founded by the rightful exercise of the principle of self-determination on the part of the people of Ireland". A second resolution demanded the release of Irish political prisoners, among them Alderman Tom Kelly, Lord Mayor of Dublin, who was imprisoned in Wormwood Scrubs. 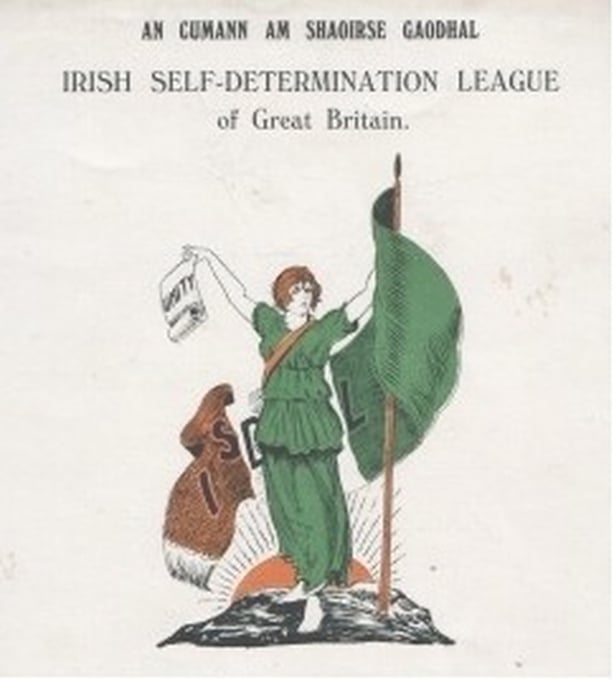 The meeting was clearly a triumph for the ISDL held as it was in London, "the citadel of the enemy’s authority". The annual meeting of the corporation of the Royal Albert Hall held a few days later recorded strong protests at the letting of the hall for "revolutionary’ purposes", while the Home Office reported to the British cabinet that the hall was "packed for the occasion".

Encouraged by this great success at the Albert Hall, the ISDL continued to support Irish independence throughout 1920. It demonstrated outside Wormwood Scrubs prison in May in support of Irish prisoners on hunger strike. When the Irish-born Archbishop of Melbourne Daniel Mannix was refused permission by the British to land in Ireland because of his Sinn Féin sympathies, he toured Britain instead. The ISDL rallied to his support and held protest meetings with up to 20,000 in London and Manchester and smaller meetings in several other locations. Mannix was fearless in his condemnation of British policy in Ireland and, with the ISDL at his side, effectively did a lap of honour, so much that the British were very much relieved when he left. 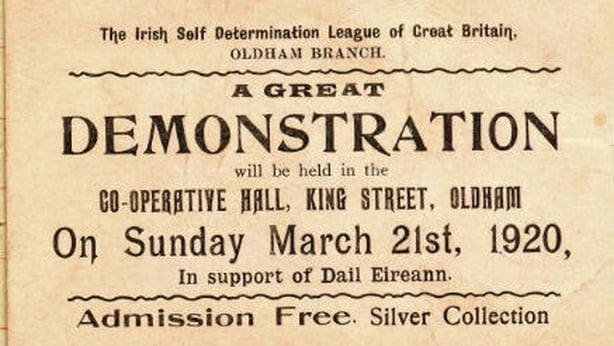 When Terence MacSwiney was on hunger strike in Brixton prison from August to October 1920, the ISDL were present each day outside the prison protesting and praying. When he died, the central executive of the ISDL and 27 branches of the London ISDL marched in his funeral cortège.

By late 1920, the ISDL was firmly established as an Irish protest organisation in Britain and activities continued throughout 1921. Shortly after the Truce was announced in July 1921, the Richmond ISDL branch hired the steam launch Royal Thames, raised the republican flag and sailed from Richmond to Chertsey in a show of great defiance. Over 200 people enjoyed the trip and an open-air céilí was held at their destination.

However, a campaign of violence conducted by the IRA in mainland Britain from November 1920 onwards led to a reduction in ISDL membership. The Treaty diminished the raison d’être of the organisation further and the inevitable split with regard to the Treaty led eventually to its demise in 1925. But for a few short years, the ISDL was very much the voice of Irish nationalism in London and provided much needed support for the underground Dáil Éireann government at a critical time in the War of Independence.