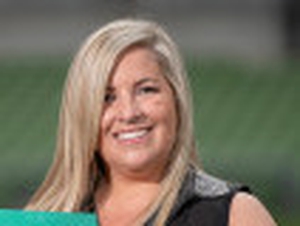 Rugby has enjoyed increased popularity over the last number of years, and is considered the third most popular sport in Ireland behind the GAA and soccer. With initiatives like Get into Rugby and Give It a Try, player numbers in the women’s game are rising, with females now accounting for nearly 30% of all players worldwide.

But alongside this growing popularity, we also see increased concerns over injuries. Rugby is a physically demanding sport with a reputation for carrying a high risk of injury. However, most of our knowledge around rugby-related injury stems from the men's game and this may not accurately reflect the injury situation in the women’s game. Rugby is one of few sports where men and women compete under the same rules, but a lack of research into the women’s game means trying to compare injuries poses a challenge.

A study published in October 2019, reported a 243% increase in injured women rugby players entering an Irish emergency unit over a 10 year period. Was this due to actual differences in the number of injuries sustained by females compared to males? Or is it merely due to the rapid increase in the number of female players over the last 10 years in Ireland?

The Irish Rugby Injury Surveillance project is the first long-term strategy to track injuries across the male and female amateur game in Ireland. By monitoring trends in the type, location and mechanism of match and training injuries, future injury reduction and player welfare strategies may be developed and implemented. To date, the project has released two injury surveillance reports comparing injuries from the male and female All-Ireland League seasons. These reports provide a unique insight into how often players are getting injured and what the most common injuries are.

If we look at the season reports over the last two years, we see that female players sustained less injuries overall than their male counterparts. On average, a female player would have to play 21 matches to sustain one injury, unlike males who sustain one injury every 15 matches. While injuries to the lower limb are the most common (43% of all injuries), the head and face overall were the most common injury sites, followed by the knee and ankle joints. For men, the head and face and ankle joint also ranked in the top three injury locations, but the shoulder joint was the second most common injury site.

The most common injury was concussion, with a female team sustaining on average two concussions a season

Ligament sprains and muscle strains accounted for nearly 60% of all women’s injuries, and resulted in an average of 10 to 14 days’ absence from matches and training. Interestingly, the majority of ligament sprains and muscle strains were occurring early in the rugby season which may be due to inadequate or insufficient preparation during the pre-season training period.

Rugby injuries occur most often during contact events such as tackling, rucking and mauling so it is not a surprise that the tackle event resulted in the majority of all injuries. In the women’s game, the ball carrier was at an increased risk compared to the tackler, but the ball carrier and tackler had equal risk for men.

From RTÉ Archives, Kevin O'Connor reports for Tangents in 1973 on women's rugby in Ireland

It's often reported that women are more likely to sustain anterior cruciate ligament (ACL) injuries compared to men. While results from the project found that the number of ACL injuries sustained by males and females were similar, female players took longer to return to sport following an ACL injury. The third quarter of match play had the highest incidence of injury in the men's game, while there appeared to be a high rate of injury earlier in the match, during the 2nd quarter (first 20 to 40 minutes of match play) for women, which then plateaued across the 3rd and 4th quarters.

"You'll always have that thought until you do go back on the field" @KnockaderryGAA & @LimCamogie minor Sarah Condon talks to @thatdanishgirl about her experience of the ACL injury - read https://t.co/N50PmZsdS8 for more pic.twitter.com/STxmkUOAGV

The Irish Rugby Injury Surveillance project aims to provide an accurate and up-to-date representation of the risk of injury across the male and female game each season in Ireland. While there are similarities in the injuries occurring across the men’s and women’s game, there are also some differences coming to light.

The project's findings highlight a need for targeted injury reduction and player welfare strategies specific to the women’s game. In particular, there is a need to address the resources required to manage treatment and rehabilitation following an injury.