Analysis: many of us use fermented foods as a potential source of live microbes to benefit our health

Food fermentation is a distinct form of food processing where foods are produced through the actions of microorganisms, including bacteria and fungi. These microorganisms act as miniature factories, enhancing the nutritional content of the foods and manufacturing new tastes, odours, and health-promoting qualities.

Fermentation can occur naturally when sugars in food, certain microorganisms and suitable storage conditions coincide. Our ancient ancestors observed these natural phenomena and through trial and error, recreated the fermentation process as a means of preserving foods. Indeed, cheese is believed to have been accidentally discovered through the storage of milk in vessels made from animal stomachs. This type of storage created conditions for the curdling of milk that human innovation later developed into more controlled cheese-making practices.

There is a long history of fermentation being used to create and preserve food delicacies. The Korean cuisine, kimchi, made using lactic acid bacteria, is thought to have been used for thousands of years as a method to preserve cabbage and other vegetables.

In the 20th century, the widespread use of other preservation techniques and modern food practices reduced the need for and interest in fermentation as a preservative in Western culture. In recent years, though, many individuals have returned to using fermented foods as a potential source of live microbes that may benefit health. The markets for two such foods, milk kefir and kombucha, have grown considerably since the 1990s and is expected to reach $2.1 billion for kefir and over $7 billion for kombucha by 2027.

There's different evidence across history relating to the health benefits of specific fermented foods; for example nomadic shepherds in the Balkans believed that kefir had "magic strength". From a scientific perspective, it is clear that fermentation can increase the levels of vitamins and minerals in food, improve the digestibility of proteins and carbohydrates and remove allergens. There is also evidence that fermented foods positively impact the microorganisms in our guts and, in turn, our immune system and other aspects of health.

Some studies have isolated probiotics (beneficial microorganisms with proven health claims) from fermented foods. For example a strain of the bacteria Lactobacillus delbrueckii ssp. bulgaricus has been recorded to boost the immune system in humans. Interestingly, Élie Metchnikoff, the grandfather of modern probiotics, linked Lactobacillus delbrueckii ssp. bulgaricus to the improved health and longer lives of Bulgarians from specific villages, who regularly consumed yogurt.

Other laboratory studies have reported positive effects of several fermented foods on various aspects of health, including blood cholesterol levels, lactose intolerance, cancer, diabetes, immunity, atherosclerosis, and obesity, to name a few. However, despite some strong evidence of benefits for specific foods, there remains a lack of large-scale human clinical trials to specifically investigate the health promoting aspects of fermented foods. Stronger health claims about specific fermented foods are not possible unless they are backed by such rigorous science.

To get a clearer understanding into the health promoting attributes of fermented foods, both in general and with respect to specific foods, we need to learn more about the microbes themselves. Luckily, DNA sequencing is revolutionising our understanding of the microbes present in fermented foods (as well as in other environments, including the gut).

DNA is made up of a series of four nucleotides (think of them as letters), and the way these letters are arranged determines the genetic information they encode. In humans, this genetic information might determine what colour eyes or hair we have, while for a microbe it might determine its ability to make a tangy sourdough or a particularly flavorsome cheese. The process of DNA sequencing reads these genetic letters and generates a massive amount of information, which is then interpreted using computing methods. 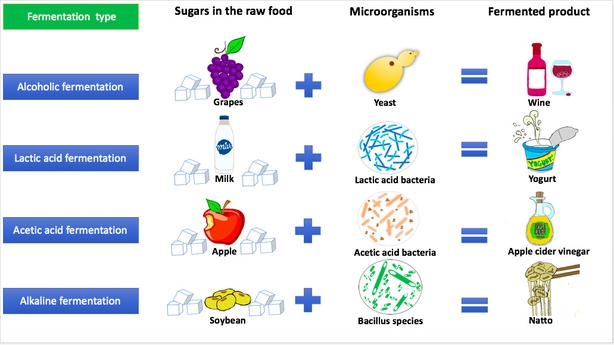 In fermentation, this technique is helping scientists to determine what microorganisms are present and predict how they ferment certain sugars and even what flavours they can produce, without needing to grow them individually using Petri dishes and agar. DNA sequencing has also revealed that many of the microbes in fermented foods can indeed also be found in the human gut.

Dietary changes such as the adoption of fermented foods have influenced the evolution of metabolism. Around 10 million years ago, ancient ancestors of both humans and other great apes began to include fermented fruits and leaves into their diet as they transitioned to life on land. Such changes caused our ancestors to adapt genetically, with genes such as ADH4 (Alcohol Dehydrogenase 4) and HCA3 (Hydroxycarboxylic acid receptor 3) believed to have emerged or mutated in response to this dietary pattern.

Fermentation also has uses outside of food, and its products and processes can be applied to many industrial settings. Fermentation can be used to break down fossil fuels and plastics to combat climate change and can also generate biofuels from fermented waste products. Humans and fermentation are undeniably linked, with fermentation shaping our food culture and industry - and even contributing to our own evolution.

Liam Walsh is a PhD researcher (Walsh Scholar) with Teagasc