Analysis: the £450 Pope's Carpet was viewed by the government as a "good advertisement for Irish industry and piety"

The 31st International Eucharistic Congress in 1932 was the largest spectacle ever held in the Irish State. A celebration of Catholicism and the Eucharist, the highpoint was the celebration of mass by the Papal legate, Cardinal Laurie, in the Phoenix Park, attended by over one million people.

Pope Pius XI had nominated 1929 as a jubilee year to celebrate 50 years since his ordination as a priest. Throughout that year, speculation was rife that the Vatican would award the much sought after 1932 Eucharistic Congress to Ireland. Archives show that the Irish Free State government instructed its ambassador to the Holy See, Charles Bewley, to express its "desire" to Vatican officials "to make a gift to the Holy Father in honour of his jubilee year" in January 1930. The gift, which the "Holy Father [was] very glad to accept … from Ireland", was eventually presented after the Eucharistic Congress had been awarded "with great pride" to Dublin.

Governmental discussions on the presentation gift took place at a time when the Irish Free State wished to maintain high level contact with the Vatican. This early State commission is significant and it was a proposal laden with expectation. The archival papers clearly show that the government intended to achieve a soft power and cultural diplomatic gain from the presentation.

The government originally proposed presenting a stained glass window by Harry Clarke to the pope. Clarke was the preferred artist, because he had both a national and international reputation and he was in the process of completing an important and high profile State commission to design and make a window for the ILO building in Geneva. The Geneva commission was ultimately unfilled and controversially repressed by the State who feared its avant-garde, risqué scenes from Irish literature did not portray a conservative Catholic State. However, the Vatican gift was considered just before the completion of the Geneva commission and the ensuing controversy.

Discussions between Bewley and Vatican officials made it clear that any window would have to fit into the Vatican scheme of decoration. This restriction would prevent the window from showing "Irish characteristics" so it wouldn’t be immediately obvious that it was of Ireland. It was deemed that a "beautiful" gift under such limitations would lose its political advantage and the option of a stained glass window was ruled out.

Bewley had proposed alternatives of enamels, vestments or a carpet by the Dun Emer Guild or Donegal Carpets. Enamels and vestments were considered unsuitable because "they would not be kept in the Vatican". It was agreed to gift a carpet designed and made by Dun Emer. The gift would fulfil all the requirements, and if placed in a prominent position, "it would certainly be a good advertisement for Irish industry and piety".

It was agreed that a 10.6 x 5.6 metres carpet would have "the Papal arms in the centre and the arms of Ireland [a harp insignia similar to both the new coinage and the Irish Free State Seal] at one end and the arms of the four provinces of Ireland at the other" all within a Celtic interlace border. Such a design would express an Irish Catholic identity, an ancient past, the Irish political claims to all four provinces in their entirety and its alignment to the Vatican. Displayed prominently, this official State gift made a visible statement in an international arena and within the Catholic world.

The media reported that thousands of people viewed the "beautiful carpet"

The briefing documents supplied to the ambassador for the presentation, detailed the Irish Arts and Crafts philosophy of the Dun Emer Guild, declaring its product was "hand woven" and "characteristic of Irish Art", not copied but "founded on the Celtic tradition". The carpet was designed by Katherine MacCormack and "woven by hand by Irish workers … with about 2,000,000 knots in the whole carpet. It took nearly four months to weave". The carpet’s colour scheme took account of the decoration in the area of the Vatican proposed to house it: "the ground is of a rich crimson… borders in shades of red, purple, gold and blue. Twenty different shades were used in the carpet’. It cost just over £450 (approximately €31,121 when adjusted for inflation).

At the formal presentation of the carpet on February 28th 1931, Ambassador Bewley explained the motifs and discussed "the Celtic designs in the border" with the pope, who related the pattern back to "Irish illuminated manuscripts". After discussing the Guild with Bewley, who described how it "preserved the tradition of Irish design" and culture which "had been forcibly interrupted in all branches by the English invasion", the pope presented "medals and pictures" and blessings for the carpet weavers. His "pleasure" with the gift saw him placing it in his private quarters where he received visitors rather than the adjacent ante room. The carpet would be present during papal consistories. 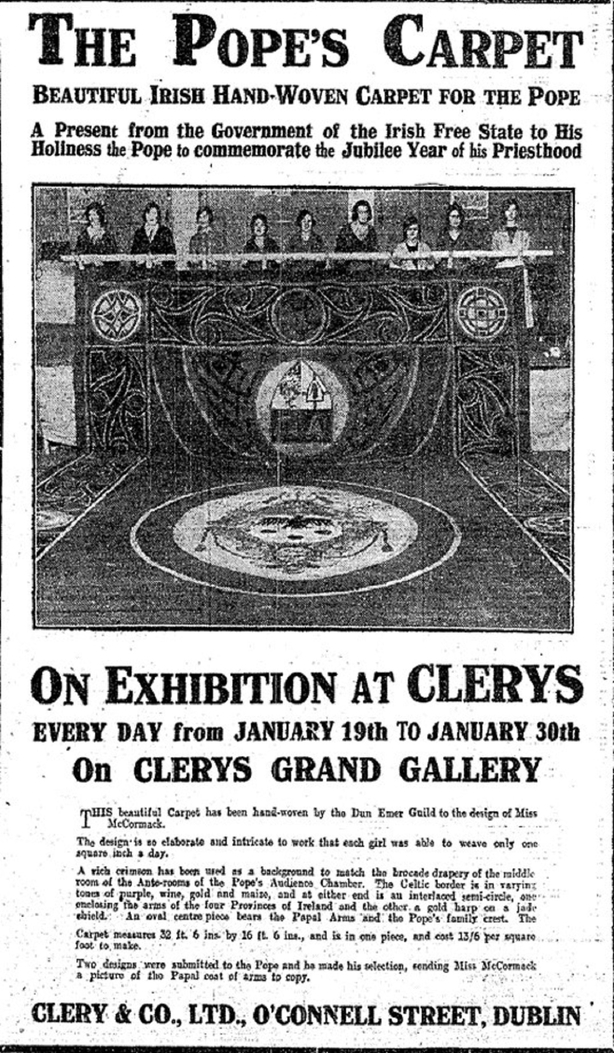 Seeking an additional political and cultural dividend, the carpet was privately exhibited before being despatched to Rome at the Dublin Metropolitan School of Art (now NCAD), where it was viewed by President W.T. Cosgrave, members of the government and invited dignitaries. It was also put on public display in the Clery & Co department store, whose newspaper advertisement for the event is entitled "The Pope's Carpet". it showed a photograph of the exhibit and its nine weavers. The media reported that thousands of people viewed the "beautiful carpet".

The commissioning and presentation of the gift was reported in Italian media, the Vatican’s Osservatore Romano, the IL Messaggero and extensively in local and national Irish papers. Many of the reports saw national affirmation in the Pope’s personal interest in the carpet and its placing in his private study. L'Illustrazione Vaticana reproduced a photograph of the carpet that they had requested from the Departmental of External Affairs, who believed it would be a good advertisement for the Dun Emer Guild and Irish industry

The Irish government had a clear agenda when it considered the gift. The object was to reflect an Irish identity aesthetically and it had to align with its political and internationalist cultural ideology. It sought to present "something which would remain in the Vatican" and something "typical of Ireland’s artistic capabilities" that would "bring the country to the notice of any visitor who came to the Vatican, and as such would be very desirable".

The government was visually culturally aware. It recognised the areas of arts and crafts in which the country excelled in its deliberations, namely stained-glass (Harry Clarke), embroidery (exampled by Cuala and Dun Emer), enamels (Oswald Reeves' students at Dublin Metropolitan School of Art) and carpets (both Dun Emer and Donegal were considered). Irish arts and crafts were frequently exhibited at home and abroad in exhibitions supported by the Irish government. Invariably these were shown in a continuum of artistic output since medieval times linking contemporary practitioners with their early Christian antecedents.

Mirroring the strengthening ties between the Irish State and the Catholic Church in the 1930s, the "Pope’s carpet" was well-established in the Vatican, by the time the Eucharistic Congress ended. Hosting the spectacle was also an enduring and crowning achievement for the new de Valera-led government.