Analysis: personal care products marked 'flushable' are responsible for over 90% of microplastic fibres at some Irish locations

The scale of microplastic pollution in our oceans is of increasing concern. The International Union for Conservation of Nature have estimated that 12 million tons of plastic end up in our oceans every year. Many potentially hazardous contaminants, including pharmaceuticals, metals, viruses, and bacteria, can adhere to the surface of microplastics. In the marine environment, the primary sources of microplastics include micro beads as components of cosmetics, while secondary sources result from the breakdown and fragmentation of larger plastic debris from wave action and ultraviolet light and synthetic clothing fibres released in grey water.

Understanding the possible sources of microplastics entering the coastal environment is central to developing effective pollution reduction policies and strategies. It is widely accepted that domestic washing machines can release thousands of synthetic fibres per wash cycle. While most microplastics may be removed by the wastewater treatment process and retained in the sludge, a certain portion bypass the treatment process.

Studies have estimated as much as 160,000,000 microplastic particles per day from the release of grey water into coastal waterbodies. As a result of the ubiquity of multiple coloured particles in the aquatic environment globally, clothing fibres and marine ropes are considered the principal source of marine microplastic pollution.

To date, microplastic fibres from widely flushed personal care products, such as wet wipes and sanitary towels, have not been clearly identified in aquatic systems to date. European production of non-woven textiles for hygiene products and personal care wipes exceeded over 1m tonnes in 2016 alone.

In comparison with clothes fibres that are generally coloured or multi-coloured, fibres from sanitary products are white in colour. In most microplastic studies to date, white fibres are likely underestimated, because of the commonly used filtration procedure to capture microplastic particles, as filters are commonly white, making visual identification of microscopic white fibres against a white background difficult This is important given the global growth of non-woven synthetic fibre products and their ubiquity in wastewater.

The new study shows that combined sewage overflows associated with periods of heavy rainfall gave rise to the release of sewage waste containing wipes and sanitary towels, which were deposited on the beach near the Claddagh in Galway City, impacting on public health and the environment. Combined sewage overflows occur worldwide and the nearby intertidal zone at Mutton Island is prone to the accumulation of high volumes of washed-up sewage-derived debris on a frequent basis. This is significant in the context of climate change, where we are likely to see increased rainfall events and flooding.

Combined sewer overflows and the subsequent shoreline deposition of sanitary waste have not previously been thoroughly investigated as a source of white microplastic fibres in the marine environment. This study found that wet wipes and sanitary towels are a source of unaccounted white microplastic fibres in the marine environment and not all flushable wipes are biodegradable - in fact, 50% of the wipes labelled "flushable" in this study were shown to contain microplastics.

From RTÉ Radio 1's Morning Ireland, marine biologist Alina Wieczorek on how microplastics may be hampering the ability of our oceans to absorb CO2

An urban rural gradient involving three locations from Galway City (close to Mutton Island and adjacent to a wastewater treatment plant) to counties Clare (Bell Harbour) and Mayo (Bellacragher) were investigated in this study. The total number of fibres found near Mutton Island was 6083 microplastics fibres per kilogram of sediment, while the rural sites had much lower levels (Bell Harbour 1627 and Bellacragher 316). The total number of white fibres was 5536, 788, and 265 per kilogram of sediment for Mutton Island, Bell Harbour and Bellacragher respectively. Incredibly, 91% of microplastic fibres at Mutton Island are likely derived from wet wipes and sanitary towels.

Covid-19 may have brought its own challenges for the oceans, including the increased use of disinfectant wipes during the pandemic which potentially may end up as microplastic fibres in the sea. It is widely known that microplastics can act as vectors for contaminants including bacteria and viruses and are potentially harmful for public health and marine life.

Our study highlights the need for increased regulatory surveillance and improved public awareness of microplastic pollution in the environment. Human behaviour needs to shift away from the inapt disposal of sanitary products down the toilet and instead divert to alternative land-based waste management, while we find alternative solutions to plastics to address these needs.

Funding for this study was based on research grant-aided by the Marine Institute and funded by the Marine Research Programme of the Irish Government under the framework of the JPI Oceans (PLASTOX).(Grant-Aid Agreement No. PBA/ME/15/03). 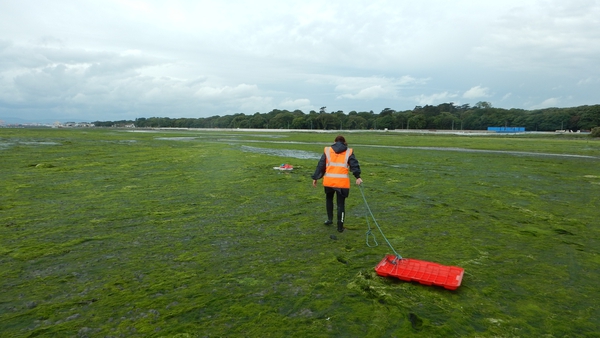 Why do some Irish estuaries turn green every summer?