Opinion: a record numbers of death notices were posted to the RIP.ie website in April 2020 for many counties

Excess mortality has become a potent indicator of the deadliness of Covid-19, especially against the background of mixed reporting benchmarks and standards between countries. In the Republic of Ireland, it looks like we're not doing too badly nationally by this metric. However, this belies the geographic disparities revealed by that staple of Irish life: the death notices. 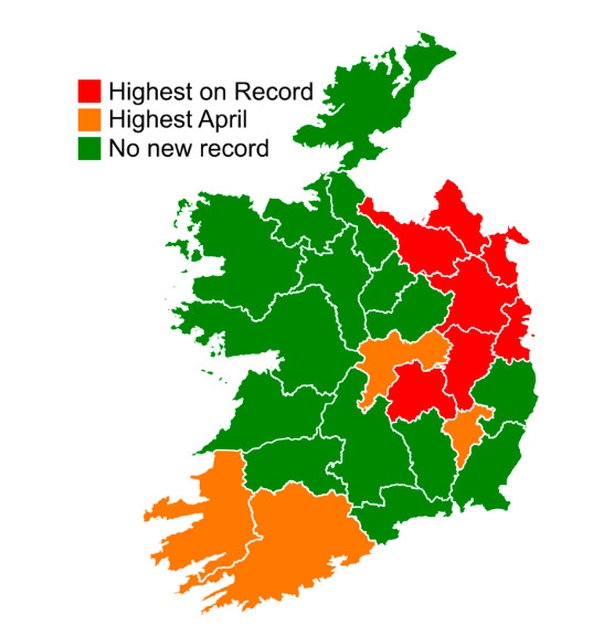 Nationally, the number of death notices posted on RIP.ie in April 2020 for the whole of Ireland are the highest on record, but comparable with January 2018 and 2017 when there was a bad flu season. Typically deaths peak in Ireland in the winter are associated with respiratory diseases, including the seasonal flu. The number of death notices posted typically decreases going into April, whereas there is a spike associated with the coronavirus in 2020.

Comparing the magnitude of this spike to the seasonal peak in winter of other years, it could be argued as comparable to the numbers of death notices posted in previous years (January 2018 was the previous maximum). There is increasingly heated debate about whether the unprecedented measures implemented to combat the spread of Covid-19 are necessary to maintain, if excess mortality is comparable to that of the seasonal flu. However, this picture of the national situation, where Ireland could be on track to keeping mortality to that of a bad flu season, belies a more complex geography of the pandemic in Ireland.

Worldwide, the highest incidences of infectious diseases like Covid-19 are concentrated around large population densities where the interaction between infectious and uninfected is more likely to occur. This is no different in Ireland where the highest number of cases are in Dublin. Over 1,200 death notices were posted in April 2020 in Dublin, far higher than the average number of postings for April (which is 690) and almost 20% higher than the previous maximum number of monthly postings, which occurred in January 2018. Due to its high population, Dublin dominates the numbers.

The next highest number of postings for April 2020 is Cork at just over 400, again reflective of its large population. However, while the number of postings for Cork is higher than any previous April, it is not the highest on record and is, in fact, 12% lower than the highest month on record for the county. Comparing Dublin and Cork shows that there are regions in Ireland where the figures indicate that mortality is unprecedented in the past month and regions where the measures implemented have been successful in countering the worst of the disease.

Looking in more detail at the map, it is the border counties of Monaghan and Cavan that are worst affected where the increase in postings in April 2020 relative to the average number of postings was 150% and 120% respectively. In the case of Monaghan, there were 80 notices, well above the average of 31 and previous maximum of 50, and in the case of Cavan, this was 125 notices, again far above the average of 54 for April and previous maximum of 86.

From RTÉ Radio 1's Morning Ireland, Tom McGuire, Head of RTÉ Radio One, discusses Ireland Remembers, an initiative which will remember everyone who died as a result of Covid-19 in Ireland

Cavan and Monaghan are rural counties with low populations and mid-ranking (by Irish standards) population densities. Their low populations mean that increases in postings that would seem small in other counties are unprecedented here. Further analysis of the data show that it is not the largest towns in each of these counties that have the highest increases in death postings. This confirms what has been stated previously that these infections (and subsequent deaths) occur in clusters.

Why Cavan and Monaghan have such high relative numbers is not a question that we can answer with this dataset. One question that will surely be asked is whether proximity to the border with Northern Ireland is an important factor. Northern Ireland's restrictions were implemented on a different timescale to that of the Republic. However, Donegal also borders Northern Ireland and has a typical level of postings for April on the basis of this analysis. However, we would like to flag that postings for Donegal were unusually low for the first three months of 2020 and the spike in April from this low value was not sufficient to put the county into either a red or orange range. The data may be questionable for Donegal.

While we have focused so far on the regions where there have been elevated levels of posting to RIP.ie, there are 15 counties that do not show any indications of excess mortality based on postings to RIP.ie e.g. Kilkenny in the above figure. This is surely an indication of how successful the implementation of the restrictions has been.

While it may be tempting for the reader in a "green" county to either feel relaxed about the risks or feel like they are unnecessarily restricted, we have to highlight that our analysis is based on counties and that clusters will also exist in "green" counties. For example, a recent report highlighted 9 deaths in a single care home in west Cork. Had a cluster like this occurred in a less populous county such as Leitrim where average death notices posted in April is around 20, this single cluster would have increased the death notices by 50%.

Mark Twain is frequently associated with the quote "the report of my death was an exaggeration". The website RIP.ie is not a mortality database, but is a valuable tool for studying mortality. "The deaths" are a staple of Irish life and we are not aware of any analogous websites in other countries with the ubiquity of RIP.ie. The rapid pace of Irish funerals where typically burial occurs two or three days after death (burial occurs 1 to 2 weeks after death in England) makes RIP.ie a very real time source of information on mortality.

Other studies of RIP.ie in the context of COVID-19 have been made by UCD's Barry Smyth and UCC's Séamus Coffey. Their initial analyses highlighted that RIP.ie indicated that mortality may have been higher than was officially reported at the time. Updates from Seamus Coffey have highlighted that the gap between official figures and those indicated by RIP.ie have closed over time. Their work showed the usefulness of the website as a real-time and democratic proxy for national mortality.

There are, of course, practical issues with using data from RIP.ie such as multiple postings for the same bereavement, where the deceased has lived or was linked with multiple counties. Duplicates were removed systematically from this analysis. RIP.ie was set up in 2006, however there are counties with 0 death notices up as far as 2009, hence we begin our analysis 2010 onwards. During this period RIP.ie has compared well with official mortality statistics, particularly from 2014 onwards.

Ireland Remembers, remembering those who have died during the pandemic

Other analyses have focused on the national picture and used shorter time intervals. Due to our focus on the county-by-county geography, we used monthly data as our time interval, leaving April 2020 as an unabated peak. Analyses with a finer temporal resolution have shown that the postings to RIP.ie are reducing. Let's hope that trend continues.

Dr Gerard McCarthy is a lecturer in the Department of Geography at Maynooth University. Dr Pádraig MacCarron is an applied mathematician and Complex Networks Researcher at the University of Limerick