By Richard Butler, University of Leicester

What will Ireland look like after the coronavirus pandemic of 2020? In times of crisis, it is often hard to think beyond today and imagine what our world will look like when life returns to normal. But Ireland has been here before. Questions of the future also occupied the minds of Irish scientists and planners during another emergency in Ireland, namely the final years of the Second World War. Looking back to look forward might seem contradictory, but it can also provide a hopeful reference point in uncertain times.

The future was the theme of an exhibition held in Dublin's Mansion House from April 25th to May 4th 1944. To put those dates into some perspective, the D-Day landings began just a month later on June 6th. The exhibition focused on how best to organise every-day life in post-war Ireland.

Harry Allberry, who had served as president of the Royal Institute of the Architects of Ireland, arranged for the publication of a series of seven pamphlets to accompany the exhibition. These were called the Reconstruction Pamphlets’ and they began with the optimistic motto: ‘Ireland is ours for the making, LET US MAKE IT!’. Copies of all 7 can be studied in the National Library on Dublin's Kildare Street.

From British Pathé, "News from the Eire border in 1944"

It is remarkable how some of the issues the pamphlets raise are just as relevant 76 years later as they were back then. The Co. Carlow-born planner Manning Robertson wrote the first pamphlet on the theme of cities and towns. He dreamed of an Ireland of "well laid-out, spacious, healthy, and convenient" cities, surely a vote-winner today. He also commented that, even in the 1940s, the pollution caused by car traffic in Irish cities was a "constant irritation" that would somehow have to be addressed.

Robertson hoped that Ireland’s post-war housing would be accompanied by parks and wildlife. Otherwise, he said the investment would be as pointless as "a house which provides no bedrooms". Thinking of locals as well as future tourists, he asked "why has every town not got its St. Stephen’s Green – even if it be on a miniature scale? … A visitor who wants to enjoy the sun in a normal Irish provincial town has to walk about the streets – he can’t even sit down!"

By contrast, engineer John C. Costello’s views on trains in pamphlet no. 3 would not be so popular today. In short, he thought that railways had no hope of competing with future "modern high-speed motorway[s]", and called for the culling of the entire network except for the "main arterial" lines. Almost every station would be shut, replaced by over 1,600 kilometres of motorway.

From RTÉ Archives, Charlie Bird reports for RTÉ News on the opening of Ireland's first motorway in 1983

Of course, we are still well short of this figure today, and at the current rate of construction (never-mind questions of climate change), a network of this size might just be reached by the early 2100s. Optimistically, Costello thought the whole motorway network could be done in five years with 35,000 men, and a budget of £60 million, the same as building a dozen Ardnacrusha dams. In fact, Ireland’s first motorway only opened in the early 1980s.

On forestry (pamphlet no. 4), the planner James Aitken hoped for a comprehensive national plan to increase the amount of land given over to trees, something that could just as easily have been written today. In his time only 0.7% of the country was afforested, the lowest in all of Europe except Iceland.

Aitken hoped that 2 million acres could be planted, which would bring Ireland up to around the level of Denmark, and that 100,000 jobs could be created in the process. He worried that inaction would only lead to heavy rains causing landslides and "disastrous flooding" of low-lying areas, something that could easily have been written in 2020.

From RTÉ Radio 1's Morning Ireland, George Lee talks to farmers in Leitrim and Roscommon about dedicating their land to forestry with just 11% of Ireland's total land area is under forestry

Perhaps the most remarkable pamphlet was the final one ("Planning for Leisure"), by the architect Noel Moffett who speculated on what might constitute leisure, hobbies and outdoor exercise in the future. A few years earlier, Moffett had designed an extraordinary open-air amphitheatre made of dried turf, sand and blocks of stone near Dooagh on Achill Island for the International Folk-Dance Committee to promote Irish singing, dance and drama.

He was deeply optimistic about post-war Ireland. "It is taken for granted to-day that whatever else the post-war world brings us it must bring us more spare time. … The big questions now are: … How can a big increase in [leisure] be catered for? How can facilities be provided so that everyone may make the best use of their leisure hours, and may enjoy themselves in their own way?" 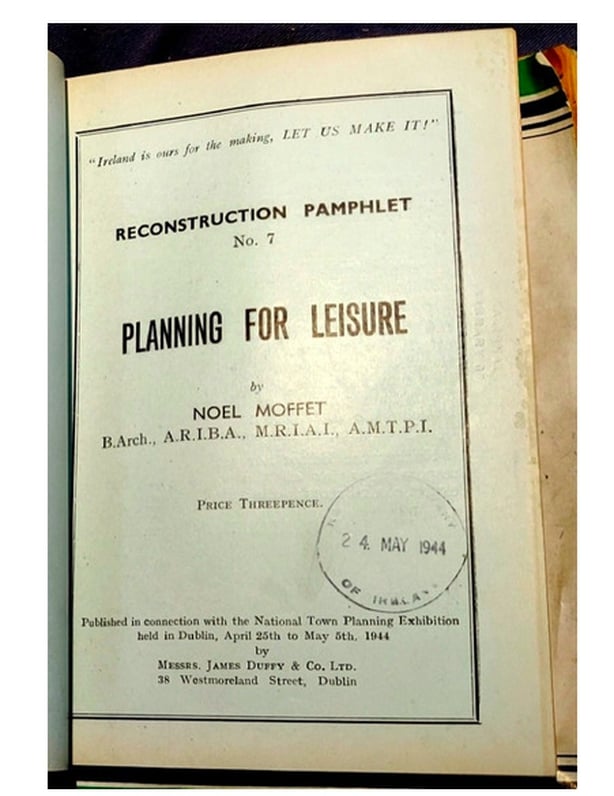 The architect hoped that Dublin’s playgrounds (then numbering only 10) could be expanded dramatically, and that sports pitches, hand-ball alleys and swimming pools would soon appear all around Ireland. "Why not also encourage the townsman to leave the town as often as possible, and taste the joys of the country?" His vision was of dozens of new camp sites and youth hostels in converted former "big" houses. "Hikers or cyclists", he hoped, could "spend a night at any of them for a shilling".

Moffett dreamed of a network of hiking and cycling routes away from motor-car traffic. Tourists would add to the foot-fall, with Ireland becoming a "world tourist centre" for visitors who wished to see a "landscape … untouched by the horrors of war". However, this network still remains to be achieved.

People living in the past thought, dreamed and worried about the future just as we do now. With such an uncertain future, there is something to be learned from looking back every now and then.

Dr Richard Butler is a lecturer at the University of Leicester and a historian of 19th and 20th century Ireland.