For decades, we have assumed that the type of work people do shapes political participation. For example, the nexus of "labour," working class identity and support for leftist parties has organised politics and political analysis for decades. Likewise, white-collar and managerial workers are seen to support for more conservative, right-of-centre parties. Workplaces in general have traditionally served as an arena for political socialisation that encourages participation. This is good for democracies in that it encourages people across the political spectrum to participate, which should have knock-ons for politicians seeking to represent the interests of broad swathes of populations.

However, the traditional assumptions about links between work and political participation needs to be re-thought. Recent years have seen radical changes in labour relations that call into question traditional ideas about work, labour, and politics. We have seen a significant growth in "precarious work", work that involves limited duration or no contract and is characterised by low control over daily tasks, little influence on the employment organisation, cyclical unemployment, and financial vulnerability.

Often characterised as "bad jobs," precarious work is increasingly prevalent as employers seek greater and greater flexibility in labour relations. While associated with a host of economic, familial, and health problems, our research indicates that precarious work also undermines political participation and increases political inequalities that are particular detrimental for younger generations and those with lower socioeconomic status.

We investigated the implications of precarious work for political participation across a broad sample of 31 European countries. We measure precarious work simply as the number of different indicators that people report (ranging from 0 to 5). From many different angles, precarious work is bad for democracy. 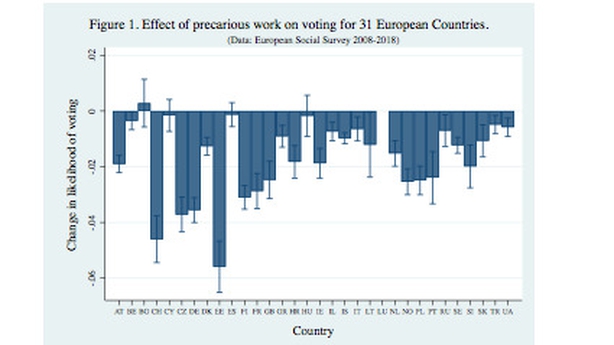 In general, the negative effect of precarious work on voting is quite remarkable given variation in economic development, political systems, demographics, culture, and history across countries. The countries that buck the trend, including Bulgaria, Cyprus, Spain, and Hungary, constitute less than 9% of the total population of Europe. As elections all across Europe are often won or lost based on a few percentage points, the implications of precarious work for political outcomes are profound.

Yet, the story is more complicated than that seen with country averages. Focusing on the Irish context, we asked two further questions. First, who is most at risk of precarious work? The answer is quite simple: younger people and those with limited educational attainment. 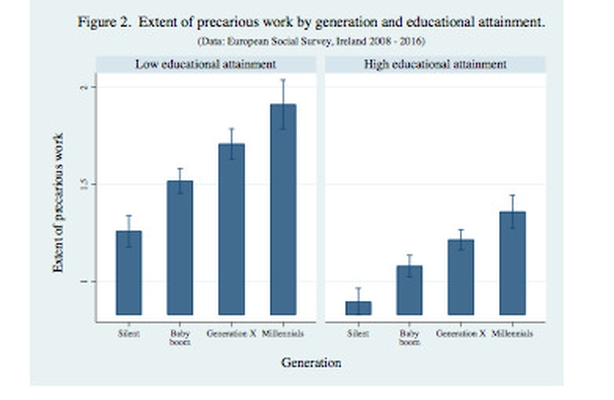 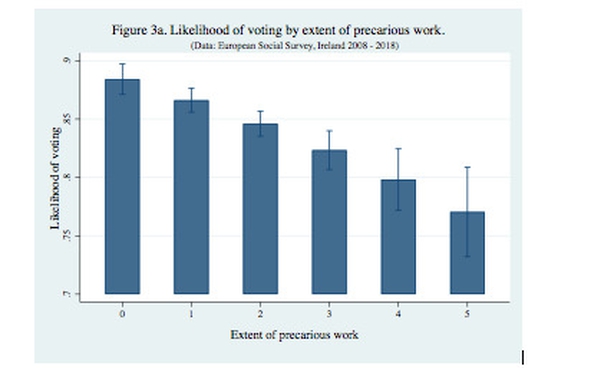 A difference of 11% is not trivial: the 2016 Irish election saw Fine Gael 1.2% higher than Fianna Fail in the popular vote (25.5% versus 24.3%) and the 2016 US presidential election had numerous electoral districts where Donald Trump and Hillary Clinton were separated by one or two percentage points. Even the "landslide" victory of Boris Johnson's Conservative party in the UK in December 2019 was only an 11% difference in popular support. Although we do not know much about which political parties precarious workers would gravitate to, differences in participation that we highlight vastly exceed margins of victory for a large number of recent elections. 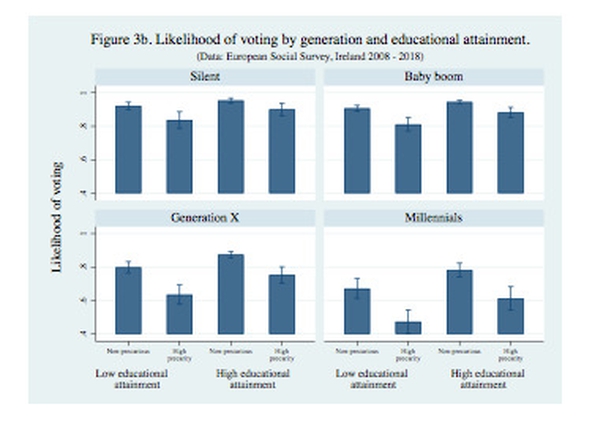 Political analysts have long recognised that political participation is fundamental for political representation and political equality. Given this, the political implications of precarious work are doubly troubling. Precarious work is concentrated, and increasingly so, among the youngest generation and those with lower socioeconomic status. This in and of itself is bad and has negative consequences within and across generations.

Effective mass mobilisation of young, precarious workers could be a game-changer for almost any election

At the same time, all three factors combine to undermine political participation and contribute to large-scale political inequality which creates both challenges and opportunities. The challenge is the vicious cycle, whereby those that abstain from voting are less likely to have their problems put on the political agenda and there is therefore little political will to change things.

At the same time, a clear opportunity is the demographic reality that effective mass mobilisation of young, precarious workers could be a game-changer for almost any election. For those who want better and more equitable futures for generations to come, it is paramount to figure out ways to re-connect people whose work lives increasingly distance them from political participation.

Professor Ross Macmillan is the Chair in Sociology at the University of Limerick and Leo Azzollini is a PhD candidate in Public Policy and Administration at Bocconi University, Milan