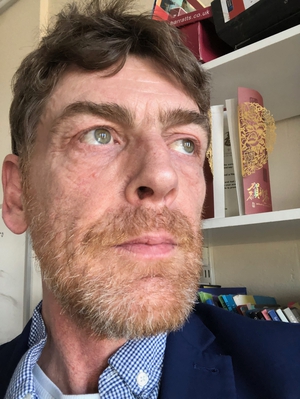 Analysis: Terence MacSwiney and his colleagues made global news and had a huge impact on an idealistic young Chinese poet

In 1920, events in Ireland became global news. One story above all gripped the attention of the world's journalists, intensifying as it unfolded: the hunger strike of Terence James MacSwiney. The Lord Mayor of Cork’s fast to the death with two of his comrades was reported widely in realtime by wire and had huge impact.

The struggle in Ireland and its implications became, briefly, one of the most widely discussed topics on earth. MacSwiney inspired notions of liberty in a crumbling imperial world, destabilised by the horrors of the First World War. His words and actions famously resonated with Nehru and Ghandi. Less well known than the connection to India, but no less significant, is MacSwiney’s link to China

In 1920, China was in chaos, a divided country dominated by foreigners and warlords, its ancient empire having finally collapsed in 1911. In his idealistic youth, the poet Guo Moruo cannot have known that one day he would become a man of enormous power and prestige. He would be the longstanding Chairman of both the Chinese Academy of Sciences and the China Federation of Literary and Art Circles, from the inception of the People’s Republic of China in 1949 until his death in 1978. He died not long after his comrade and friend Chairman Mao, whom he praised relentlessly.

Moruo wrote an astonishing poem, an emotional "in real time" commemoration of fellow writer MacSwiney in 1920, usually translated as "Victorious in Death". Unusually passionate in tone, the young Chinese intellectual produced it through October 1920, as Irish news came into Japan, where Guo was living at the time.

His subjects are alive as he begins writing, the stanzas dated as they were composed, but the poem ends with news of their deaths. Guo also commemorates volunteer Michael Fitzgerald, whose death in Cork Gaol on October 17th came after 67 days on hunger strike. A week later on October 25th saw the deaths, within hours of each other, of his two comrades, Joseph Murphy (after 76 days, also in Cork Gaol) and MacSwiney, (after 74 days in Brixton Jail).

In the middle of the poem, Guo compares MacSwiney and Fitzgerald to the legendary hunger protesters of ancient Chinese heritage, Bo Yi and Shu Qi:

Terence MacSwiney, Irish patriot! Today is the 22nd of October! (Never has the calendar on the wall so fixed my attention!) Are you still alive, locked in your prison cell? Came a cable of the 17th from London: It was sixty-six days since your fast began, and yet you bear yourself as well as ever. You talked for a while with your dear ones on the afternoon of the 17th, and your face was even more radiant than before. Your strength was fading daily… and today is the 22nd of October. Irish patriot, Terence MacSwiney! Can you still be counted among living creature? A cable of the 17th from your native Cork told than a Sinn Feiner, a comrade of yours, Fitzgerald, fasted for sixty-eight days in Cork City Gaol, and suddenly died at sundown on the 17th. Cruel deaths there are in history, but few so tragic. The Shouyang Mountain of Ireland! The Po-yi and Shu-chi of Ireland! The next cable I dread to read…     October 22

Who were the Chinese brothers in Guo's poem? Bo Yi and Shu Qi lived at the time of the transition from the Shang dynasty to the Zhou, at the very beginning of Chinese recorded history (over 3,000 years ago). War against the Shang by the Zhou king, Zhou Wen Wang, was morally unacceptable to them and they refused to eat, dying on the Shouyang Mountain (首阳山, in Shanxi). They are commemorated in Chinese literary culture for their personal and moral virtue, loyalty, and pacifist idealism, occupying a longstanding cultural position as exemplars of high moral principles and integrity. For Guo to compare MacSwiney and Fitzgerald with Bo Yi and Shu Qi is praise of an interculturally profound order.

However, the American-born Murphy, one of the three Irish patriots to die in the Cork hunger strike campaign, is not mentioned in Guo’s poem. That there were three, not two, Irish hunger strikers, may have been inconvenient for the smooth working of Guo’s cultural analogy. The poem ends thus:

The mighty ocean is sobbing its sad lament, the boundless abyss of the sky is red with weeping, far, far away the sun has sunk in the west. Brave, tragic death! Death in a blaze of glory! Triumphant death!

Victorious death! Impartial God of Death! I am grateful to you!

You have saved MacSwiney, for whom my love   and reverence know no bounds! MacSwiney, fighter for freedom, you have shown how great can be the power of the human will! I am grateful to you! I extol you! Freedom can henceforth never die! The night has closed down  on us, but how bright is the moon…     October 27

Guo’s poem is a window on a liminal moment in world history.