Analysis: is it possible to emulate the Empire Christmas pudding and make one using just Brexit-friendly ingredients?

In the 1920s, the London-based Empire Marketing Board devised a campaign to encourage the use of commodities from across the British empire. The idea had existed in embryonic form during the early 1920s, when the Australian Dried Fruits Board had the idea of creating a recipe that included their products and placing advertisements in the British press.

The advertising effort was augmented by the support of the British Women's Patriotic League (BWPL). These were an imperially-minded group of women who urged their families and friends after the First World War to buy ingredients which were from the empire. This resulted in the Empire Shopping Week to counter the growing American encroachment into the market-place. Stalls were set with only British empire goods and shops around London’s West End were encouraged to follow suit.

The Americans also offered what we might today call brand collateral and provided recipes to accompany the dried fruits. In 1924, the BWPL began to boycott the imports from any non-Empire countries. They felt that the British owed the Australians their loyalty to buy their products for their sacrifices during the war and they launched the Empire Christmas Pudding and encouraged all housewives to "make your Christmas Pudding an Empire Pudding" 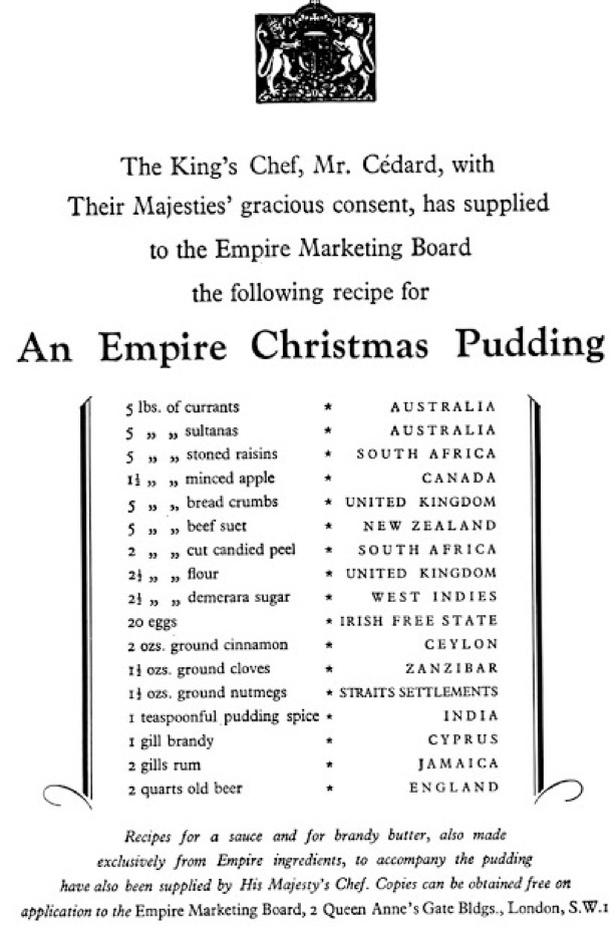 The idea received a boost in the form of a testimonial from Monsieur H. A. Cedard, billed as the King's Chef, who provided a recipe that utilised all the ingredients on the list. What could be more patriotic than a Frenchman telling British subjects that the King of England eats this pudding?

The list satisfied the most ardent imperialists with the exception of the New Zealanders who found themselves not represented on the list of ingredients. This was remedied in the 1927 iteration of the menu, when suet from New Zealand was included.

In 2019, "Dominions", "Colonies" and "Free-State" seem anachronistic and not at all representative of the realpolitik of Brexit and its potential implications. It is perhaps a good idea to recognise the reasoning behind the campaign. The campaign appealed to patriots with a jingoistic view of the empire who perhaps believed in 1926 that the sun would never set on it. In their view, trading with the "dominions" and "colonies" was in itself an act of commercial patriotism as all revenues eventually poured back into the imperial treasury at some point.

In 2019, the most committed Brexiteer could only applaud this thinking (although the most committed Brexiteer probably purchases consumer goods with a non-British provenance). The other main reason behind the campaign is one of self-image for the empire loyalists who saw the commodities listed as proof of the might and size of their empire and evidence that the promises of imperial glory were not only tangible, but also edible.

The current UK Secretary of State for International Trade and President of the Board of Trade Liz Truss recently re-affirmed this idea of Britain trading with the colonies as part of a potential post-Brexit World Trade Organisation deal for Britain post-Brexit. Truss championed the idea of a "Commonwealth Caucus" within the WTO where post-colonial members of the British Commonwealth would do trade deals with Britain based on common heritage, Anglophone culture and similar trade ideals. Truss said this represented a third of the world’s population, which is indeed a serious number of people. But, as pointed out by British satirical publication Private Eye, this same one third of the planet’s population only represents 12% of global GDP, making it a far less attractive morsel.

So what's in a Brexit Christmas pudding?

On the subject of morsels, it is time to speak of crumbs and, in particular, the kind of crumbs left in your kitchen when you have attempted to make a pudding but lack all the ingredients. The idea of a Brexit Christmas pudding is overdue so we need to review the list of ingredients required to create a tasty festive after-dinner offering. Once the exotic overseas commodities are removed, the list is a far more manageable one:

The idea of suet is passé as it is typically used in puddings and winter mincemeat that fills mince pies and the breadcrumbs are not attractive to the culinarian so we are left with apples, flour, eggs and beer. It means that the mighty Empire Christmas Pudding recast as a Brexit Christmas Pudding would look something like a plate of apple pancakes (out of season) washed down with a glass of beer. At least, this means even the most ardent Brexiteers can have their cake and eat it.