Analysis: while virtually unknown to the general public, the Dublin-born philosopher, writer and politician left behind an extraordinary legacy

William Molyneux left an extraordinary legacy to the Irish and European Enlightenments. He was a pioneering practitioner of observational and experimental science, the inventor of one of the seminal problems in the history of Western philosophy and the author of one of the foundational texts on Irish parliamentary autonomy.

But despite his extensive and enduring influence on Irish intellectual culture, Molyneux's achievements are underappreciated in most academic departments, while his name is virtually unknown to the general public. So who was he?

Molyneux was born near Ormond Gate in Dublin in April 1656. He attended St Patrick’s grammar school and Trinity College Dublin before moving to London to study law in 1675. His great-grandfather Thomas Molyneux had arrived in Ireland from Calais in northern France in the 1570s, and the family established strong connections with the Ussher dynasty and other prominent members of the Irish Anglican élite.

The "Molyneux problem's" mind-bending implications have occupied the thoughts of philosophers, theologians and scientists ever since

Having returned to Dublin in 1678, Molyneux married Lucy Domville, the daughter of the attorney general, Sir William Domville. Lucy lost her sight to illness a few months into their marriage, and the experience informed her husband’s emerging interest in the science of visual perception. His research on lenses and refraction culminated in Dioptrica nova (1692), the first major work on optics in the English language. This was the source of a series of axioms about the mental construction of distance and visual images that later provided the starting point for George Berkeley's theory of immaterialism.

Around the same time, Molyneux wrote to John Locke with a question about the perceptual capacities of a hypothetical blind man who had suddenly been enabled to see. Locke included Molyneux’s question in the second edition of An Essay concerning Human Understanding (1694), and its mind-bending implications have occupied the thoughts of philosophers, theologians and scientists ever since.

The "Molyneux problem" posits a man who has been blind from birth and who has learned how to distinguish between a sphere and a cube using only his sense of touch. It asks whether the man on acquiring sight could immediately and correctly identify the objects through his newfound power of vision.

Molyneux answered the question in the negative, on the grounds that visual perception requires experience. Locke tentatively agreed, while Berkeley far more radically argued that the man would neither recognise the objects nor understand the nature of his task. Gottfried Wilhelm Leibniz and Francis Hutcheson were among the contemporary philosophers who defended the opposite view, while Voltaire and Denis Diderot used recently published surgical evidence to open up new areas of the debate. More recently, Molyneux’s question has informed the work of the playwright Brian Friel and the neurologist Oliver Sacks. Experimental psychologists are still trying to find a definitive solution to the problem.

Molyneux’s interests in the 1680s and 1690s extended far beyond the science of optics. He published the first English-language translation of René Descartes's Meditations (1680) and worked with the Gaelic antiquary Roderic O'Flaherty on Irish history and geography. He established the Dublin Philosophical Society as an Irish branch of the Royal Society of London and maintained a wide-ranging correspondence with Locke that helped to shape the later development of Locke’s Essay.

At the same time, Molyneux was also actively involved in Irish politics. Having fled to England during the Williamite Wars of 1689 and 1690, he moved back home when the conflict was over and served as Member of Parliament for Dublin University in 1692 and again from 1695 until his death. By then, tensions were building between the Irish and English parliaments over exports, taxation and claims to forfeited estates. Molyneux brought his experience to bear on his major contribution to the contemporary movement for Irish legislative independence, namely The Case of Ireland's Being Bound by Acts of Parliament in England, Stated (1698).

This remains a controversial work. On the one hand, Molyneux’s colleagues in the Irish parliament feared political reprisals - indeed, the English parliament officially denounced the book and quickly moved to enact legislation that adversely affected Irish industry and trade. On the other, Molyneux’s credentials as an Irish patriot have often been called into question, primarily on the grounds of his apparent reluctance to recognise the political rights of Irish Catholics.

Even so, Molyneux’s Case inspired and influenced campaigners for Irish liberty throughout the 18th century, and his name was invoked at times of national crisis by Jonathan Swift, Henry Grattan and Theobald Wolfe Tone, as well as by a number of Irish Catholic historians. Molyneux’s contribution to Irish intellectual history deserves to be fully explored and better known. 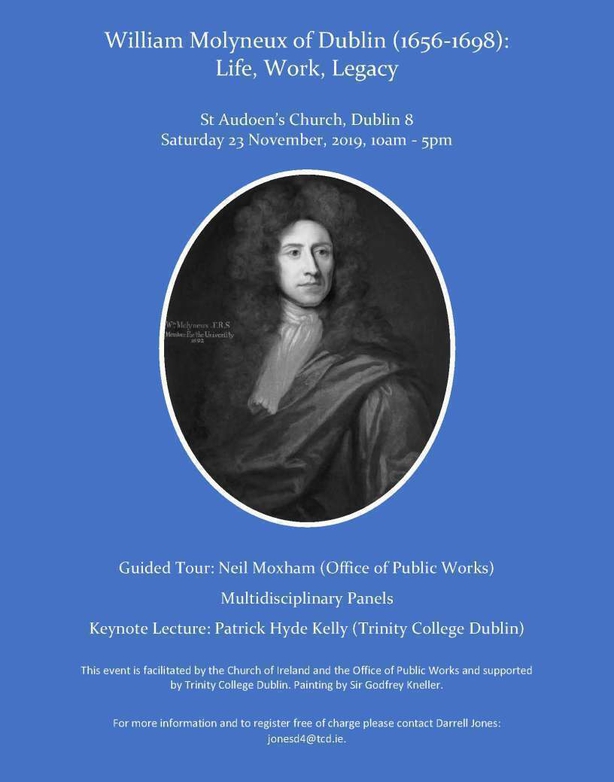 A special conference on William Molyneux’s life, work and legacy will be at St Audoen's Church in Dublin on Saturday next (November 23rd). The event will include a guided tour of the church (where Molyneux practised his Anglican faith and is buried) with Neil Moxham from the Office of Public Works. There will also be discussions on Molyneux’s achievements in science, philosophy, and politics, as well as a keynote lecture by Patrick Kelly from Trinity College Dublin on Molyneux’s status as an Irish patriot. For more information and free registration, please contact Darrell Jones at jonesd4@tcd.ie

Dr Darrell Jones teaches early modern and Enlightenment literature in the School of English at Trinity College Dublin. He is a former Irish Research Council awardee