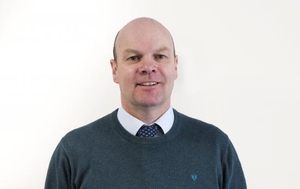 Conflict analysis methods provide a useful way to better understand what’s really going on in a conflict situation. Most international organisations, multinational corporations and public bodies use these approaches to better understand the dynamics of a conflict situation. If we apply one such method, the Harvard Programme on Negotiation approach, does it provide any insights regarding the current Brexit situation?

The focus of this approach is to get behind the positions communicated publicly by the parties, and examine what’s going on at a deeper level. Some people would bite their hand off, rather than back down from a position. As the current furore over Brexit further demonstrates, international politics can occasionally get locked into positions that appear to be destructive for the parties taking them to the outside observer.

But the difficulty with positional negotiations is that while positions taken appear to reveal the totality of the situation, they rarely address the real underlying problem. Our biology and subconscious desires propel us to conflict, as we search for status and sense of belonging to a community that we aspire to, in response to our neurological drivers. Often positions are conjured in smoky back rooms, reinforced by groupthink and echo chambers, where people's attitudes become more extreme and ambitious following discussion with like-minded others.

Beneath the visible positions are interests and our interests are the reasons we have taken a position. There could be many interests behind a position, some even contradictory, some incoherent, some inchoate and sometimes even subliminal. Sometimes it's the case that important interests only become really apparent in the cut and trust of the conflict or negotiation process. Often, we begin to realise we may have interests in common despite divergent positions. The real underlying issues at the heart of the matter can lurk unstated, beneath the surface, and perhaps not easily identified or ever stated publicly.

In this model, needs are the basic urges or impulses which must be fulfilled for the conflicting parties to be truly satisfied with an outcome. If you don't address the needs, then you won’t solve the problem. Sometimes these needs manifest as fears. The analysis is based on the idea that understanding of a conflict develops in layers. Only the superficial variables are perceivable initially, and explicable at first. What lies at the core of the conflict explains conduct.

The current phase of movement into meaningful dialogue in Brexit is interesting and comes after what Ira William Zartman described as a mutually hurting stalemate (MHS). In this case, the mutually hurting stalemate seems to have prompted a shift to principled negotiation, as opposed to positional negotiations, where Irish and British governments seem to be now recognising the importance of relationships.

The quandary now for them is that, to quote Taming Intractable Conflicts: Mediation in the Hardest Cases, "the interests of the parties may, in fact, be quite different from their stated positions, and disentangling the two is a central challenge."

Without getting into the complexities of the Brexit negotiations, it’s possible to see, from the basic table below, how this form of analysis could help reveal commonalities and facilitate the development of options. 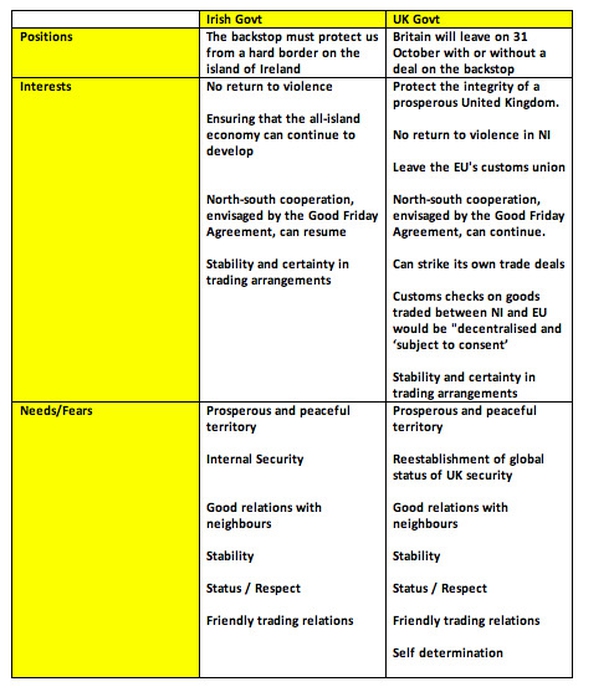 In the long term, to quote John Maynard Keynes, "we are all dead" so immediate priorities in negotiations tend to satisfy what we currently value. The model lays out our common interests in clear manner and suggests the key to unlocking this conundrum in the medium term may be to focus on our joint interests and needs. Any negotiations should probably therefore include aspects of security, economic development, status and stability within the political situation.

Finally, reinforcing the global status of the UK is now important during the current immediate negotiations. This could come in the form of the creation of new political alliances that acknowledge, not just the status of Northern Ireland within the UK, but aligns with the trading connections of the wider Anglo-Saxon world.