Opinion: known as Garland Sunday, Bilberry Sunday or Reek Sunday, it was a day to mark the end of Hungry July and anticipate the harvest to come

In Ireland of the past, July was a month marked by scarcity of food before the harvest, and people looked forward to the end of "Hungry July" by celebrating what is commonly known today as Garland Sunday. Like most old Irish pagan festivals, it was co-opted as a Christian one, yet had been celebrated long into prehistory. Its origins are in the pagan festival of Lughnasadh (named after the god Lugh), which is one of the four major seasonal festivals, along with Samhain, Imbolc and Bealtaine. While Lá Lughnasa Ioccurs on August 1st, the Garland Sunday celebrations moved to the last Sunday in July.

Today, Garland Sunday is an annual day of pilgrimage, also known as Reek Sunday for the climb of Croagh Patrick, Co. Mayo, known as Ireland’s holiest mountain. It is where St Patrick is said to have spent 40 days and nights fasting. To honour him, pilgrims ascend the mountain on this day, praying for special intentions or as an act of penance. Many of them climb barefoot, performing circuits of certain sites on the mountain before attending Mass in a modern, purpose-built church on the summit.

The day is also variously known as Lammas Sunday, Hill Sunday, or Bilberry Sunday (more of which later). In some parts of the country, it is known as Domhnach Chrom Dubh (Crom Dubh’s Sunday). Crom Dubh, the Dark Stooped One, was an old tyrannical god with evil powers who opposed the youthful and strong sun-like god Lugh. It is believed that Lugh fought and defeated the older god Crom Dubh to take back the harvest. Traditionally, Lughnasa was also marked by games held in honour of Lugh’s mother, Tailtiu. Many other sites across the country are associated with this day such as Keshcorran Hill in Co Sligo, Mount Brandon in Co Kerry, Slieve Donard in Co Down and Máméan in Co Galway.

It is a day not only for pilgrimages to such holy sites, but also outdoor gatherings for leisure at those sites associated with Garland Sunday, often near water and mostly on hills. The gatherings included sport and fairs, with stalls full of harvest treats. As the end of the hungry season, it was also marked by a little feasting: a time to serve the first official meal of potatoes of the season served with meat, and barmbracks made with those bilberries.

From RTÉ Lyric FM's Naturefile, a profile of the bilberry, one of the richest natural sources of anthocyanins

Although they are most commonly known by this name, these little blue berries are also known by a variety of other names such as whortleberries, whinberries, blaeberries, heatherberries - in Ireland they are fraughans or frachóg. The berry was used since ancient times in cooking, medicine and as a purple dye. Until relatively recent times there was a thriving cottage industry where young people picked these berries to be collected by merchants who then shipped straight to urban centres in the UK, where they were hugely popular.

Bilberry picking was a fun pursuit often associated with a little romance. It was commonly done during the summer months by young people who would forage for them together. One tradition is that bilberry cakes were baked by young women and presented to the young men they were in love with.

From RTÉ One's Nationwide, Helen Mark reports a 1960s' survey which showed that there were over 3,000 holy wells across the country

Garland Sunday is notably still celebrated at two locations in Co. Sligo. It begins in the early morning at the Tobernalt Holy Well, just outside Sligo town. The first mass is usually celebrated thereat 6am by the Bishop of Elphin. People walk in pilgrimage from the town and, until recently, many families travelled by boat up the Garavogue river. Mass is followed by the anointing of the sick and Adoration of the Blessed Sacrament with further prayers in the afternoon.

In the afternoon, a fun gathering takes place in the south Sligo village of Keash. Here, Keashcorran is the focal point of the festivities, a holy hill topped by Neolithic monuments that is home of the extraordinary looking Keash caves. People traditionally climbed the hill on Garland Sunday, but locals have admirably added a modern twist to traditional activities to keep them relevant. Their Garland Sunday festivities now include sporting feats such as the King of the Hill run and family-friendly walks and runs. Some years have seen bonnie baby competitions, dog shows, turf footing, and bouncy castles and music.

There are sure to be some organised activities close to your area this Garland Sunday. But if not, what better way to revive these old traditions than taking a climb of one of the holy hills near your locality, or if that’s too strenuous visit a local holy well. While you are out and about, see if you can find some wild bilberries to sample. You might even find enough to present to your loved one. 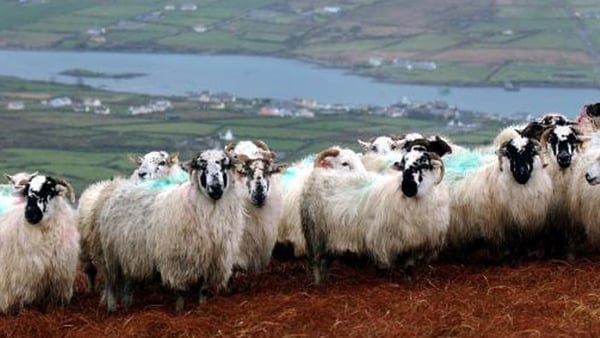