Opinion: with adult female illiteracy in Morocco running at nearly 70%, Markle's focus on education was noteworthy

Last week, Prince Harry and Meghan Markle visited Morocco for three days. The British royal couple visited the country's largest city Casablanca, the capital Rabat and Asni, a small town in the High Atlas Mountains. There, they visited Education for All (EFA) boarding houses, where they met some of the students and teachers.

EFA offers free boarding to girls aged 12 to 18 to give them access to education. The aim of the organisation is to help these girls continue their education since most of them drop out of school right after finishing primary education and sometimes even before this. EFA started off with only eight girls in a house and it currently houses almost 200 girls from Asni and its surrounding regions.

A noticeable number of Moroccan girls, especially in underprivileged areas, find it hard to access one of the most basic human rights: education. According to the World Atlas Data, adult female illiteracy for Morocco was 68.8% in 2015.

From RTÉ Radio 1's Marian Finucane Show, an interview with Andrew Morton about his book "Meghan: A Hollywood Princess"

The reason for the high rate of female illiteracy in the country is mainly lack of awareness as educating women is considered useless by many parents, especially in rural areas. In addition to this, other factors which contribute to female illiteracy include a lack of means of transportation and the language barrier. The Amazighs, who are the indigenous people in North Africa, speak their native language Tamazight instead of Arabic and the latter is the language of instruction in schools.

During the royal visit, Prince Harry awarded an MBE to Michael McHugo, the British education pioneer who founded Education For All in 2008. The royal couple’s visit to such an NGO was a boost of the status of the girls in Moroccan communities, especially in the remote Atlas Mountains.

Markle's conversation with some of the girls in the boarding houses about their future highlights the trip’s main themes, which were women empowerment and the promotion of gender equality. In addition to visiting EFA, she engaged in multiple conversations with different women entrepreneurs in Rabat during a reception at the British ambassador’s residence. 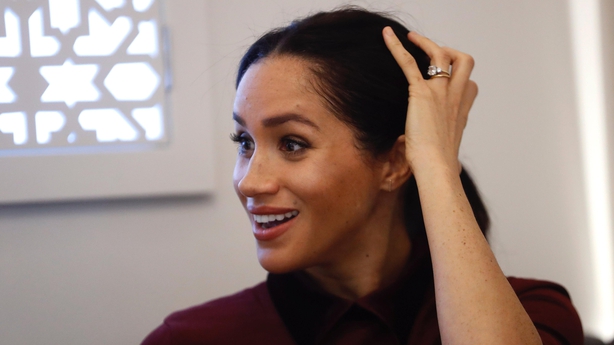 This is not the first time Markle has shown her dedication to girls’ empowerment. She has been on several trips as a volunteer to India and Rwanda to raise awareness about the importance of educating girls. "Everyone should be afforded the opportunity to receive the education they want, but more importantly the education they have the right to receive. And for women and girls in developing countries, this is vital", she said during a trip last year to a university in Fiji. "Because when girls are given the right tools to succeed, they can create incredible futures, not only for themselves but also for those around them".

Markle and her husband's visit to Morocco received quite positive feedback on social media from Moroccans. They were praised for visiting Morocco’s rural towns as well as their interest in fostering the continuity of education among girls in the country. Moroccans were impressed by the couple’s desire to visit the most underdeveloped regions of the country instead of enjoying the country’s luxurious sites.

Moroccan women’s comments on multiple online news stories focus on Markle’s pregnancy. They believe that it is hard to be traveling let alone visiting remote areas when one is expecting a baby in two months. Young Moroccans, who are usually debating the political system in the country on social media, made sure to highlight the fact that Moroccan politicians have never paid Asni a visit. They believe that the couple’s trip should be a message to many Moroccan decision makers to make changes in adult literacy programmes.

This official visit is believed to enforce the bilateral relationship between the two countries, especially after Brexit

In addition, the British ambassador Thomas Reilly’s comments about the visit before, during, and after the trip received a lot of feedback on Twitter. This official visit is believed to enforce the bilateral relationship between the two countries, especially after Brexit.

The visit is an "important opportunity to promote the strong relationship between the British and Moroccan people" said Reilly, considering that London intends to replicate Rabat’s trade deal with the EU once the UK leaves the bloc. Reilly emphasised Morocco’s development strategies and stated that the Royal visit supports the country’s goals.