Analysis: sinkholes like the one last month in Co Monaghan are a reminder that our place on this dynamic planet depends on the support of what lies beneath our feet

By Eoghan Holohan and Fergus McAuliffe, Irish Centre for Research in Applied Geosciences

Last month saw a 100 metre-wide sinkhole open up overnight in Co. Monaghan. The sinkhole has generated national headlines, with impressive drone footage featuring spectacular brown scars and cracks arcing across the green Irish landscape. Unfortunately, it has also badly damaged the local community centre and GAA club, which has led to their closure. So what exactly are sinkholes and what happens to make them form?

From RTÉ News, a report on the dramatic subsidence in Co Monaghan

Simply put, a sinkhole is a hole in the ground. Technically put, it is an enclosed topographic depression. Either way, a sinkhole forms by subsidence, or sinking, of the earth’s surface. Such sinking can be a slow sag or a rapid collapse. In three dimensions, sinkholes can be shaped like a saucer, a bucket or an ice-cream cone. The width or depth of sinkholes can range from a few metres to a few hundreds of metres.

The story of how sinkholes form starts with gravity. This continually pulls all things down towards Earth’s centre. Usually we here at the Earth’s surface are prevented from embarking on an unplanned journey to the centre of the Earth by all the soil and rocks already underneath us. These serve as underlying support to resist this gravitational pull, and so things stay up where they should be. The solid foundation of your house plays a similar role; this ensures no sinking and no surprises.

In modern times, a sinkhole collapse is reported in Ireland once every few years.

Just like in a game of Jenga, removing rock or soil from underground weakens support for what is above. In nature, the removal of material commonly occurs chemically by water dissolving rock. For example, the dissolving of limestone bedrock over time by naturally acidic rainwater gives us the caves and caverns that we are so familiar with.

Alternatively, the removal of material can be physical, for example by water rushing through soil from a burst underground water pipe or by people digging out underground mineral deposits. In many such instances, large voids are created at depth. Gravity pulls the overlying material downwards into these voids, bringing the Earth’s surface down with it. Depending on the nature of the materials and the voids, this can form a surface depression - slowly or suddenly.

The vast majority of sinkholes are natural depressions. These are commonly found in "karst" landscapes, where they are also called "dolines".  Karst landscapes are special in that they develop on top of rocks – such as limestone, gypsum or rock salt - that can be dissolved by water. Other sinkholes are man-made depressions. These can develop in areas where underground mining, drilling or construction activities have been carried out, or they can form in karst areas where human activity has changed some water-related aspects of the environment. 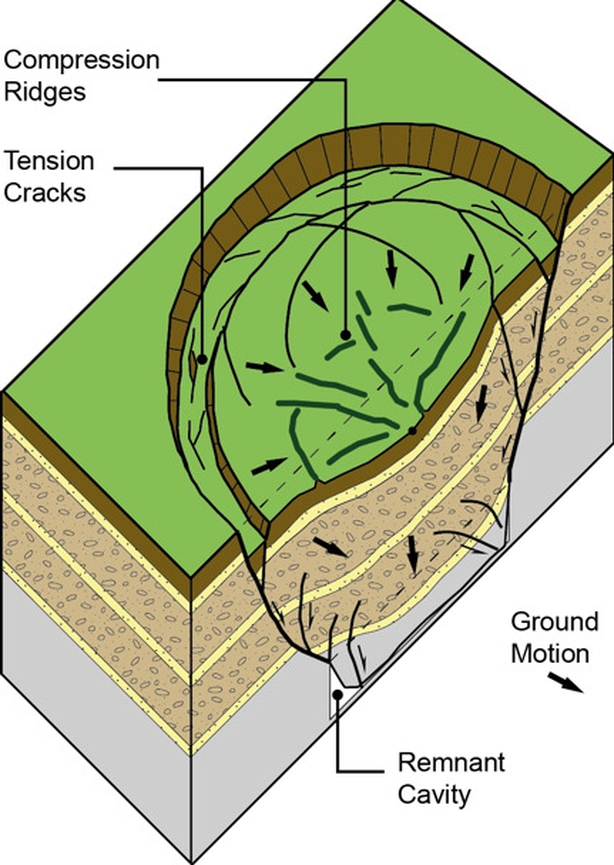 In Magheracloone, a particularly striking features of the sinkhole were the circular cracks that opened up across the GAA pitch. To understand these, it is helpful to know that all sinkholes ultimately want to be shaped like an ice-cream cone. The material sinking within the cone shape must deform in order for it to fit down into the narrower void below.

At the top, near the edge of the cone, the soil is pulled apart giving the circular or arcing ground cracks. Meanwhile in the middle, the soil is compressed giving rise to small uplifted ridges. These appear like wrinkles on a carpet of grass. The investigation into the Co. Monaghan sinkhole collapse is still ongoing, and it would be remiss to speculate here as to the exact cause until the investigation is complete. What we do know is that sinkhole collapses are relatively rare occurrences in Ireland.

Rates of sinkhole formation depend on how easily the bedrock is dissolved and how perturbed the groundwater system is. Although the Geological Survey Ireland has mapped over 6,000 in the limestone that underlies about 50 percent of our island, many of these seem very old, perhaps thousands or millions of years old.

In modern times, a sinkhole collapse is reported in Ireland once every few years. This is because our groundwater system is relatively undisturbed and the limestone dissolves very slowly. By comparison, several holes or even several tens of holes form per year in Florida, with entire houses and persons swallowed up. These collapses are also related to limestone, but they are triggered by rapidly changing groundwater levels – partly natural, partly man-made.

At the extreme end of sinkhole formation rate is the Dead Sea region. Here, a rapidly changing water level combined with fast-dissolving rock salt is producing several hundreds of new sinkholes per year. Ultimately, wherever and however they form, sinkholes are a reminder that ours is a dynamic planet, and our place in it depends on the support of what lies beneath our feet.

Dr Eoghan Holohan is an Associate Professor in the UCD School of Earth Sciences and an Investigator in the Irish Centre for Research in Applied Geosciences (iCRAG). Dr Fergus McAuliffe is Public Engagement Manager at iCRAG.