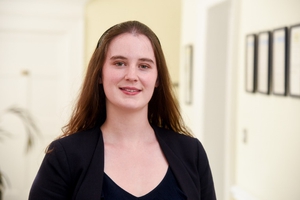 Analysis: A new research project is examining if spatial ability holds the key to the gender-gap crisis in STEM disciplines in Ireland today

My research project aims to investigate the cognitive reasons behind the gender gap in STEM education and careers. But how did I come to find this area of research? I have always been fascinated by how we teach and learn and have had an unusual educational upbringing. For most of my primary education, I was taught through Waldorf Steiner education in England and Ireland, which gave me a very broad approach to learning. For the duration of secondary education, I was home-educated, which gave me an interest-driven approach to the study of scientific and mathematical subjects, while also developing a self-directed approach to learning.

I was so interested by the science, technology, engineering and mathematics (STEM) subjects that I decided to sit the Leaving Certificate without any formal teaching. The first time I read a physics textbook I knew that this subject was the area of study I wished to pursue at third level. For the Leaving Certificate, I studied biology, chemistry, physics, mathematics, applied mathematics, English and French. I read and learned these subjects completely by myself with the aim of sitting the state examinations to hopefully gain a place at third level. I was lucky enough to get accepted on an honours degree physics programme at DIT and have thoroughly enjoyed studying physics since.

The motivation for this research project comes from my own personal experience of learning maths and science subjects without any teaching. At college, I observed a pattern with students finding the course difficult, the subjects that had the greatest failure rate and the students that were dropping out. Many of these students were female. I felt these issues came from mathematical competencies, as the students that had a greater mathematics ability seemed to progress easily, achieved higher grades, and gained a deeper understanding of the physics principles being taught.

From RTÉ One News, a report on the I Wish showcase which encourages girls to study STEM subjects

Spatial ability and reasoning are strongly linked with mathematical abilities, showing high correlations between both skills. It seems that addressing the apparent lack of spatial abilities, particularly in female students, could positively impact on these essential skills needed to successfully complete their studies. So if there's a gender-gap crisis in STEM disciplines in Ireland today, does spatial ability hold the key?

Over the past 20 years, there have been many initiatives and much investment in making STEM subjects more attractive to both female and male students. Many of these initiatives have had limited success as they are often based on re-designing the curriculum and have failed to address key findings from national and international spatial skills research. This research has shown that spatial visualisation skills play a central role in determining a student’s perceptions of the STEM subjects and disciplines, and significantly affect their ability to succeed in these subjects.

My project aims to investigate a fundamental cognitive barrier to STEM: spatial skills. There are many variations in the definition of spatial ability but, in general, it's viewed as a separate measurable factor of intelligence, in a similar manner to the way mathematical and verbal skills are defined. Spatial ability tasks require the generation, retention, retrieval and transformation of visual images in one’s mind. These type of tasks include understanding and remembering the spatial relationship between objects; mentally manipulate 2-D and 3-D objects; identify an object seen from a different angle; the visualisation of complex phenomena and developing unique types of intelligence.

In the Preparing the Next Generation of STEM Innovators (2010) report, the National Science Board stated that the search for STEM talent, which is traditionally sought from those with high verbal and mathematics skills, should expand to include high spatial ability. There is overwhelming evidence linking spatial skills to success in STEM, creativity and technical innovation.

While studies have consistently shown that female students have lower spatial skills than their male counterparts, one of the most important aspects of spatial ability is that it can be improved though training. Many studies show significant improvements in both male and female students’ spatial ability after training, with positive knock-on effects on grades in STEM subjects at third level, increased retention and more positive perceptions of STEM subjects.

From RTÉ Radio One's Today With Sean O'Rourke Show, a discussion with co-founder of IWISH Caroline O'Driscoll and ARUP engineer Shauna Hurley about careers in STEM

My project specifically aims to investigate the link between spatial ability and maths. The ability to think "spatially" is intrinsically linked to ability in mathematics. Many studies have shown that spatial ability and maths are intertwined, but more research is needed to fully understand how these two abilities are linked. Maths itself is often considered a tricky subject and it is quite common that the maths' class is viewed as a scary place. It seems to be socially acceptable that many people will say that they are bad at math or they hated the subject in school.

This is important, as there is such strong evidence linking spatial ability, maths and success in STEM. If we can shed some light on the relationship between spatial ability and maths, we can develop appropriate training courses for these skills particularly aimed at primary school age children. As research has shown that female students tend to have lower spatial skills when compared to their male counterparts, this could prove very important. Girls need to develop these skills at a crucial time in their education before it is too late and they have already decided that they are bad at maths or STEM is not for them.

How do we improve spatial ability?

My research will involve testing spatial and math abilities in secondary and primary level education in Ireland, along with testing the primary and post-primary teachers. Spatial-/math learning activities and courses have been designed for primary and secondary schools to make a positive impact in STEM education for female and male students and for the teachers. To date, over 7,000 students in 42 Irish secondary schools have been tested.

Preliminary data from 4,509 students indicates that students’ spatial ability improves with age but, even more importantly, the gap between the male and female students may be increasing significantly as the students progress through secondary school.

Although these findings are only preliminary, if this trend proves to be consistent and statistically significant, this gives even more reason for the need to address this gender difference at an earlier age.

This is a very interesting result, further demonstrating the link between spatial ability and mathematics. If the relationship between these two crucial skills for STEM can be investigated further, the potential for designing training courses for primary and post-primary education to address the deficit in these skills sets has great potential to change the way we support and develop STEM talent.

This work could lead to higher academic success rates and increased positive perceptions of STEM subjects, especially in young females, and ultimately lead to increased numbers of students choosing to pursue STEM-related careers. The research could potentially change the way we develop STEM talent in Ireland, and could influence the way spatial skills is taught nationally and internationally.

Rachel Harding is a PhD student at Dublin Institute of Technology. Her research project is funded by the Irish Research Council and Intel Ireland under the Enterprise Partnership Scheme