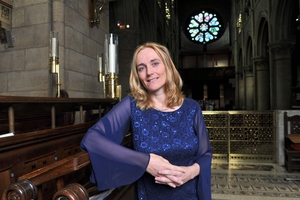 What we find here are a series of judgments and accusations put forward by several religious groups against Stefani Joanne Angelina Germanotta aka Lady Gaga for her provocative retellings of the Easter story. The judgments and accusations are targeted at two songs, "Judas" and "Bloody Mary" from her second studio album "Born This Way". Both songs are inspired by the biblical characters of Judas Iscariot, Mary Magdalene and Jesus of Nazareth.

While the songs touch loosely on events found in the gospels, they also bear remarkable similarities to events described in two gnostic gospels from the 2nd century CE, most notably the gospel of Mary and the Acts of John. In these writings, the authors portray Mary Magdalene as Jesus’ trusted disciple and wife, and Jesus as a dancer who led his disciples in a Round Dance on the night before his crucifixion. As is the case today, these gnostic gospels, and many more besides, failed to make it into the canon of the New Testament.

Similar to the writer(s) of the gnostic gospel of Mary, Lady Gaga cast Mary Magdalene in the role of Christ’s betrothed. In "Bloody Mary", we hear the Magdalene pining for her beloved in the aftermath of his death on Calvary and at the beginning of "Judas", she rides pillion behind her beau, who wears a golden crown of thorns.

But despite the Magdalene’s illicit love affair with Christ, Lady Gaga also added another layer of interpretation to this story by casting the sinful woman as a traitor in a love triangle involving the Magdalene, Jesus and Judas. For the duration of the song, Mary Magdalene confesses to her listeners that she is more in love with the bad guy, "the demon Judas," than she is with her "virtue," Jesus. At the beginning of the video we see her looking over her shoulder at Judas who rides at the back of the pack. Her chant based on their names - JU-DA/GA-GA - emphasises the intimate connection between this pair, as the world’s best known sinners without whose contributions the Easter story would never have happened.

Gaga casts Judas as the archetypal traitor who betrays Jesus not only with his lips in his legendary "kiss of death," but also with his eyes in his desire for the Magdalene. His involvement in a drunken brawl, together with his licentious behavior with other women all serve to reinforce his own notorious reputation as "the greatest sinner in town."

In "Bloody Mary," the chorus is punctuated with references to the Crucifixion, and to Jesus’ injunction to the Magdalene to dance: "I’ll dance, dance, dance with my hands, hands, hands above my head, head, head, like Jesus said." While this injunction is nowhere to be found in the Canonical Gospels, we find it in the gnostic Acts of John, which contains references to Christ as the Lord of the Dance. Lady Gaga points to this image in "Bloody Mary," in music reminiscent of the Jewish circle dance, Hava Nagila (Let us Rejoice).

As noted already, the character of Mary Magdalene as a fallen woman, a sinner and a prostitute, features prominently in both songs. As this image is different to the one presented in the New Testament, let me explain its historical origins. Mary Magdalene, whose last name is a reference to the town of Magdala on the western shore of the Sea of Galilee, is cast as a devout follower of Jesus of Nazareth and not a sinful woman. She was present at the crucifixion and bore witness to Christ’s resurrection with two other women named Mary following their encounter with an angel at the empty tomb on Easter Sunday morning.

But in the sixth century, Pope Gregory I confused this understanding of Mary Magdalene as a pious and devoted follower of Christ. His famous sermon on the subject equated her with other New Testament women, namely (1) the unnamed sinful woman who washed Christ’s feet with her tears, dried them with her hair and anointed them with perfume; (2) Jesus’ special friend, Mary of Bethany who was the sister of Martha and whose brother Lazarus was resurrected from the dead by Jesus and (3) the unnamed woman who was caught in adultery and saved by Jesus from public execution by stoning. While not responsible for the confusion over the Magdalene’s multiple personalities, Gaga nonetheless reflected Gregory’s teachings in her music.

Somewhere along the way, the idea of the sinful woman became associated with the archetypal femme fatale. This explains Gaga’s rather explicit language in her description of the Magdalene as a "Hooker," a "Prostitute," and a "Wench." Although it could sound "irreverent" and "offensive" to some, it reflects the misinterpretation about the Magdalene which was reinforced down through history.

The influence of Pope Gregory’s sinful women in the person of Mary Magdalene is a dominant theme in Gaga’s two biblical songs. "Bloody Mary" alludes to the story of the sinful woman caught in adultery in the lyric "when Ponctus (sic) comes to kill the King upon his throne, I’m ready for their stones." Similarly, at the end of "Judas," she alludes to the biblical story again.

But in a clever twist, she concludes the video with the death of the woman by stoning, a reversal of woman taken into adultery. With no music for comfort, the viewer is left to ponder in silence the lone image of the Magdalene’s "stoned" remains and outstretched arms resembling Christ crucified. Gaga’s subversion of this biblical text draws a parallel here with the death of Christ on the Cross and the death of the traitor Judas, now embodied in the person of the sinful woman. If one misses this point or misunderstands the symbolism, then it is open to interpretation as to what interpretation Gaga actually intended.

From RTÉ Radio One's Arena, a special report on The Bible In Music: A Dictionary of Songs, Works and More written by Siobhán Dowling Long and John F.A. Sawyer

There's no doubt that Lady Gaga’s music touches the hearts and minds of global audiences today, regardless of religion, gender, age, race and nationality.  Despite the accusations levelled against her like stones, her biblical songs challenge young and old alike to think about the relevance of this age-old Easter story from new and thought-provoking perspectives.

Dr Siobhán Dowling Long is a lecturer in Education at the School of Education at UCC. She is the co-author of The Bible in Music: A Dictionary of Songs, Works and More with Professor Emeritus John F.A. Sawyer