Analysis: here are some of the Irish women who led the way when it came to a career in mathematics

Maths Week is currently in full swing, but it is worth recalling that mathematics has not always been made available to all of us. In the past 150 years, many women in and from Ireland have faced hurdles when it came to carving out an education and a career in mathematics.

Our society has long been quite efficient at keeping women from developing and maintaining independent careers. In 1937, Margaret MacDonnell (nee Gillan, 1906-1989), who had a UCG maths MSc, was fired from her job as professor in Tourmakeady Preparatory College in Mayo after her marriage. She took legal proceedings against the Minister of Education and the Archbishop of Tuam and was awarded costs by the High Court. As recently as 1977, women who worked in banks or for civil service were forbidden by law from keeping their jobs once they married.

We can now see Irish mathematical women at the highest levels of achievement in teaching, research and administration, both in Ireland and overseas

The universities also played their role in this. While more women than men graduate with a third-level degree today, Trinity College Dublin didn't even admit women students until 1904. Elsewhere, Cambridge did not award degrees to women until 1948, despite allowing them to compete in examinations as early as the 1870s - hundreds of them were awarded degrees by the Royal University of Ireland instead - and Ecole Polytechique, one of France's most prestigious institutions, did not admit women until 1972.

Many of the early female high achievers had fathers or husbands who were mathematicians or scientists. Apart from teaching, opportunities were limited. For example, Mary Everest (1832-1916) from England married George Boole, who had tutored her earlier and was already resettled in Cork as the first professor of mathematics at Queen’s College (now UCC). We now know that she helped him assemble some of his landmark books there, and in 1909 she published her own book, Philosophy and Fun of Algebra.

One of her home-schooled daughters, Alice Boole (later Stott, 1860-1940) never attended university or held an academic position, but was a pioneer in the visualisation of 4-dimensional shapes. She even produced three-dimensional central cross-sections of the six regular 4-D polytopes (a term she coined for higher dimensional Platonic solids) using cardboard models, which survive to this day at the University of Toronto.Several mathematically trained women were only able to find generally under-acknowledged and often unpaid work alongside their astronomer husbands.

Dublin-born Sophie Willock (later Bryant, 1850-1922) benefited from her father’s expertise: he was a Fellow of TCD and later Chair of Geometry at the University of London. In 1884 she was awarded a DSc (in mental and moral science), probably the first woman in Britain or Ireland to be awarded this degree. She also became the first woman to have a paper published in the Proceedings of the London Mathematical Society. Apparently, she used to row in the Thames for exercise and cycle around Ireland in the summers (raising a few eyebrows along the way).

Alice Everett (1865-1949) was born in Glasgow and brought up in Belfast where her father was Professor of Natural Philosophy at Queen’s College. She studied mathematics there and at Girton College in Cambridge, but had to turn to the Royal University of Ireland to have her BA and MA degrees awarded. She worked at the Royal Observatory in Greenwich, later did research in optics and, in the 1920s, in the engineering of early television.

Indeed, many Irish women played roles in the development of technology, including the early computers of the 1940s. For instance, the ENIAC (Electronic Numerical Integrator and Computer) was set up by the US army to compute ballistic trajectories at a time when no coding languages existed. Yet when it was unveiled in 1946 as "Big Brain" to the public, no mention was made of the six brilliant young women who had programmed it.  One of them was Kay McNulty (later Antonelli, 1921-2006), from Donegal, who had earned a mathematics degree in Philadelphia.

The most well-known mathematical woman to come from Ireland was probably Sheila Power (later Tinney, 1918-2010), whose father Michael was professor of mathematics at UCG from 1912 to 1955. A UCD graduate, she had a long career there after completing her PhD in 1941 in quantum mechanics under Nobel prize-winning Max Born at Edinburgh in two years at the age of 23. She then became one of the first three resident scholars at the brand new Dublin Institute of Advanced Studies, which was set up at the instigation of then Taoiseach Eamon de Valera, himself a former maths teacher and aspiring academic.

These pioneering women are only now getting belated recognition and they stand out as role models for the future generations of Irish mathematicians.

The numbers of Irish women earning primary degrees in mathematical fields has picked up pace in the last five or six decades. In the 1960s and 1970s, about 30 women are known to have earned BAs or BScs in mathematical science somewhere on the island of Ireland. In the 1980s, it was at least 35, and in the 1990s about twice that figure.

This in turn has led to increased engagement in academia in mathematics and mathematical physics and to careers in the Met office, the Central Statistics Office, the private sector statistics and finance worlds, the actuarial profession and mathematical education. Of course, those graduates include many women who moved here from Britain, the USA, Romania, Russia, Pakistan and elsewhere.

We can now see Irish mathematical women at the highest levels of achievement in teaching, research and administration, both in Ireland and overseas. Since 2010, women have headed up mathematics departments in TCD, Cork IT, NUI Galway and University Of Limerick.  None has yet become a university president here, although it is worth noting that Ireland has a long tradition of mathematicians serving in such roles. 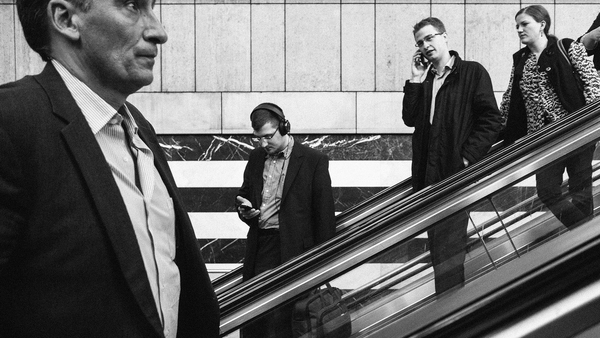 5 things you can't do properly when you're on the phone