Celtic striker Daizen Maeda had put Japan in front just before half-time, only for Ivan Perisic to level with a fine header.

Four years ago they suffered a last-gasp loss to Belgium, having held a two-goal lead, and here at Al Janoub Stadium Japan saw their quarter-final ambitions go up in smoke following a string of dreadful penalties.

Takehiro Tomiyasu, making his first start of the finals, tussled with Perisic in the early stages and his back pass was intercepted by the Tottenham man, but Japan goalkeeper Shuichi Gonda was equal to his strike.

Perisic's header across goal was almost scrambled over the line by Andrej Kramaric, but the Japanese defence managed to clear away as their own sporadic bursts forward continued to peter out.

Daichi Kamada could only fire well wide when played in by Wataru Endo, but moments later they hit the front.

A short corner routine led to Ritsu Doan crossing to the back post, where a couple of ricochets saw the ball land at the feet of Maeda, who made no mistake from close range.

The goal stood following a VAR check for offside as Japan went into the break with a narrow advantage, but it would not last long.

Perisic drew Croatia level with a powerful header from just inside the box as he got on the end of a pinpoint cross from Dejan Lovren to steer his effort past Gonda.

Gonda was at full stretch at the other end to palm a dipping Luka Modric effort behind for a corner, with both sides fancying themselves for the win as the hour mark came and went.

Substitute Ante Budimir could not hit the target when picked out at the back post before Perisic came close to a second. Yoshida gifted possession to the winger, whose shot whistled wide off the boot of Tomiyasu.

That would be the last clear-cut opportunity of the 90 minutes as Croatia were again taken to extra-time – the seventh time in their last eight major tournament knockout games an additional 30 minutes has been played.

Modric and Mateo Kovacic were replaced in the Croatia midfield during the first 15 minutes, but there were no real chances until Lovro Majer struck a low effort wide at the death.

That meant the tie would be decided on penalties, Croatia having won their previous two World Cup shootouts and Japan losing their only previous one.

Minamino took the first penalty, a poor effort which Livakovic kept out with ease as Nikola Vlasic lashed Croatia ahead.

Livakovic continued his heroics, saving another low spot-kick from Mitoma before Marcelo Brozovic put Croatia in the driving seat.

Takuma Asano finally got Japan on the board at the third time of asking and their hopes of a miraculous comeback were temporarily improved as a nonchalant Marko Livaja effort hit a post.

Captain Yoshida also failed to score, however, Livakovic saving for a third time in the shootout, allowing Mario Pasalic to tuck home and send Croatia through. 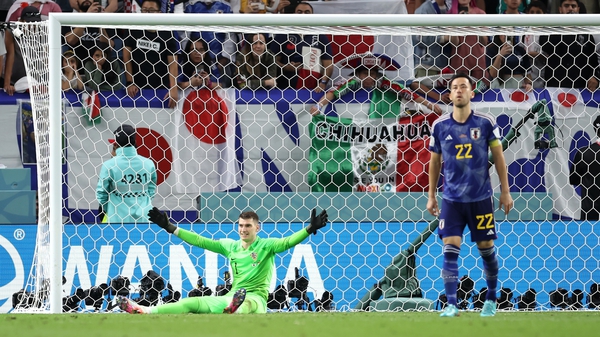