France boss Didier Deschamps defended his team selection after a much-changed side were shocked 1-0 by Tunisia.

Wahbi Khazri's second-half goal gave the Africans a famous win over the defending champions, although it was not enough to secure their place in the knockout stages.

France thought they had snatched a dramatic draw in the last minute of eight added on for stoppages when substitute Antoine Griezmann lashed the ball home.

But a lengthy VAR check concluded he was offside when the ball was crossed into the area, sparking wild Tunisian celebrations.

Deschamps made nine changes to the side which had already qualified from Group D with Griezmann, Kylian Mbappe and Ousmane Dembele all starting on the bench.

He said: "We can’t tick all the boxes. The first objective was the most important and that was to seal our place in the round of 16.

"The 24 players won their first two games and lost the last one, but I need all 24 to be available for me in four days.

"A couple of them have been able to rest up, they will have fresh legs. We were coming out of two high-intensity games. We will play four games in 12 days, we needed a breath of fresh air.

"But we need to do better than we did. Yes, the opponent punished us and gave us a run for our money.

"I wasn’t underestimating the opponent, I wasn’t not taking the game seriously, I was thinking about the game that is waiting for us on Sunday."

Deschamps, who said defender Benjamin Pavard was "not in the right condition to play", added: "I’m not going to condemn anyone, there are no scapegoats here.

But a few minutes later came news of Australia’s goal against Denmark, which ultimately saw the Socceroos through in second place behind France.

Khazri said: "We’re very happy tonight because we played a very good match. There is of course some disappointment because we didn’t qualify with four points, but that’s our fault.

"We were hoping for a goal from Denmark but it didn’t happen, but that’s what happens when you depend on others in football.

"It’s a bit bitter, but we are happy to show a good game and make the Tunisian people proud of us tonight."

In the end it was Tunisia’s defeat by Australia in their second match which denied them a first appearance in the knockout stages.

Tunisia coach Jalel Kadri said: "Yesterday I said nothing is impossible. We have been able to win against the world champions and we leave with a lot of honour and pride." 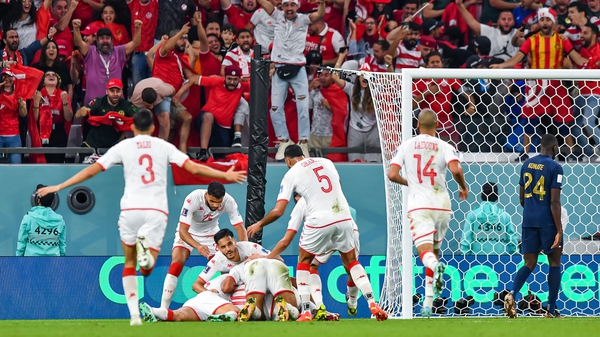