Iran coach Carlos Queiroz said his team deserved at least a draw against the United States after their 1-0 defeat on Tuesday was enough to end the side's dreams at the World Cup.

Iran needed a draw in the Group B clash to have a chance of reaching the knockout stages, but the United States won through Christian Pulisic's goal seven minutes before half-time to go through and play the Netherlands in the last 16.

"I said before the match that the United States were the most consistent team in the first two games," he added, referring to their draws with Wales and England, who qualified as group winners after beating the Welsh 3-0.

"The United States started the match as they did against Wales and England, and they were better than us, more ferocious and faster, and scored a goal, and I was not surprised by that.

"But in the second half the situation changed and we took possession of the ball and created more chances than the United States did in the first half and we deserved to score at least a goal.

"The United States players have the speed and if I may say when you play against Ferraris you need to close the highway, and that's what we did after the break and we were the better team."

The Portuguese coach praised his players for their commitment and efforts in training and matches.

"We train in an atmosphere that is not comparable to other teams, but when I work with the players on a daily basis they show enthusiasm and desire to represent Iran," he said.

Queiroz, who returned to coach Iran for a second stint last September, declined to talk about the last play of the match in which Iran's players demanded a penalty.

Striker Mehdi Taremi went down in the area as defender Cameron Carter-Vickers tried to stop him and Iran's players surrounded the referee but their protests were waved away.

"I have not seen a replay of it yet, but talking about it now is senseless, the United States reached the last 16, and this will not change anything. Life will go on and there are other matches to come.

"I said before in 2018 that I had previously coached many clubs and national teams, but I have never seen in my career players who give everything and get nothing in return like the Iranian players.

"Sometimes football is not fair, and we will come back stronger and have succeeded in gaining the respect of the whole world," he added. 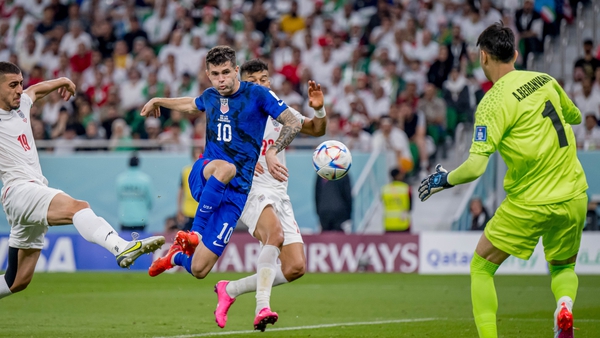 Pulisic points the way to the last 16 for the USA