Harry Kane trained on Wednesday and England are optimistic the striker will be fit for Friday's World Cup clash against the United States.

Gareth Southgate’s men enjoyed the Three Lions’ best start to a major tournament, thrashing Iran 6-2 as their quest for Qatar glory began in style on Monday.

Kane provided two assists and played 75 minutes of the Group B opener, having seemingly escaped injury despite going down gripping his right foot in pain early in the second half.

Southgate downplayed the issue but the 29-year-old left the Khalifa International Stadium with a slight limp and his right ankle lightly strapped following a poor challenge by Morteza Pouraliganji.

Kane was due for a scan on his right ankle ahead of the US game and it seems the striker has avoided injury as he trained with the group on Wednesday.

The official England Twitter account shared a photo of the striker in training accompanied by the caption "skipper" and a fist emoji.

Kane is again expected in training on Thursday and goalkeeper Jordan Pickford moved to assuage fears about the skipper’s availability.

"I think he is good, probably just a little bit sore," the Three Lions goalkeeper said at their Al Wakrah Sports Complex base.

"I’m sure he is fine, he was out on the grass with us today which is good. He is our captain.

"Everyone will take their chance. When Harry went off, Callum (Wilson) came on and got an assist.

"Everyone is training very hard. Obviously Harry is an unbelievable player, he’s the leader and the captain."

Harry Maguire also seems fine to face the US having come off against Iran feeling unwell. The defender was involved in England training on Wednesday.

Callum Wilson was not but is not believed to be a fitness doubt, while James Maddison was again absent as he recovers from a knee complaint that ruled him out against Iran. 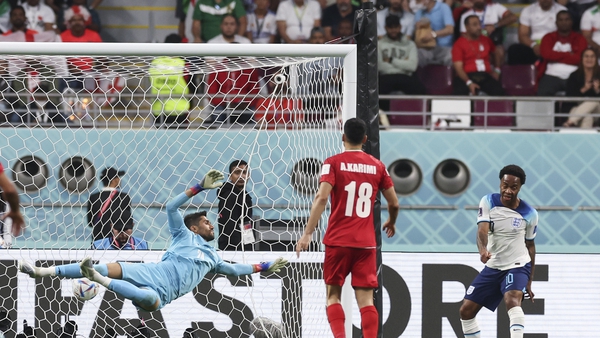 England start with a bang and put six past hapless Iran