Luis Suarez marked his 100th international cap by sending Uruguay into the last 16 of the World Cup as the striker benefited from some poor goalkeeping to eliminate Saudi Arabia with a 1-0 win.

Suarez tapped in midway through the first half after keeper Mohammed Al-Owais failed to grab the ball on a corner. The goal put Uruguay second in Group A with a maximum six points behind hosts Russia.

Saudi Arabia, who have not won a World Cup game since their debut in 1994, have zero points, just like Egypt, who lost 3-1 to Russia on Tuesday.

Depending on the result of their last group game against Russia, Uruguay will take on either Spain, Portugal or Iran, who are still on course in Group B for a place in the quarter-finals.

Suarez's goal was by no means pretty, but it did the trick.

At least Suarez, who missed three sitters in Uruguay's 1-0 opening win against Egypt, was his vintage efficient self with his 52nd international goal although he will not have dismissed fears he was not 100 percent fit.

Saudi Arabia, who suffered a minor scare when an engine on their plane caught fire before landing on Rostov-on-Don on Monday, instead have not found the back of the net in their last four World Cup outings.

After a 5-0 drubbing by Russia in the tournament's opening game, they were more playful but ultimately comparatively toothless at the Rostov Arena before 42,678 fans.

With temperatures reaching 33 degrees Celsius, two-time world champions Uruguay and Saudi Arabia got off to a cautious start. 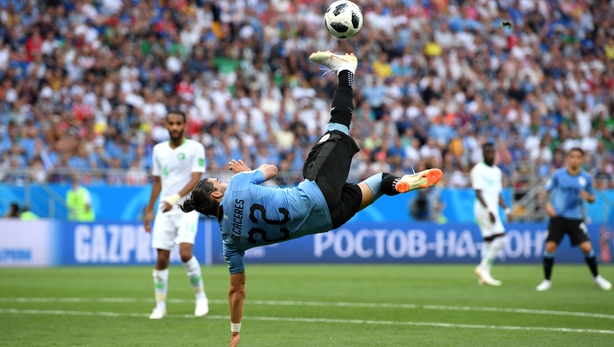 Uruguay's Edinson Cavani wasted a chance in the 14th minute, skying a half volley over the bar.

The Russian fans were the loudest, chanting "Russia, Russia" as the rest of the arena appeared to doze off.

The stadium burst into life in the 23rd minute however, when an unmarked Suarez coolly tapped into an empty net from a corner kick after keeper Al-Owais came out but misjudged his jump and couldn't reach the ball.

The Saudis continued to move the ball around but barely threatened the typically gritty Uruguay defence.

They suffered a setback shortly before the interval as veteran Taisir Al-Jassim was replaced by Housain Al-Mogahwi with an apparent thigh injury.

The second half was even scrappier, with Saudi Arabia too limited to run riot as Uruguay were happy with a narrow advantage.

They did come close to doubling the tally in the closing stages, however, when Lucas Torreira's wild shot took a deflection off of Cavani and almost beat Al-Owais.