In 2022, 5,000 were in Páirc Tailteann for the Meath-Dublin clash in Division 1 of the Lidl Ladies National Football League.

A year on and both counties get this year's competition up and running when meeting at DCU St Clare's on Saturday. While the latter venue boasts excellent facilities, it is a surprise that the game was not fixed for a county ground, namely Parnell Park.

At the launch of the 2023 league at Lidl's headquarters in Tallaght, Dublin's Carla Rowe was asked about the choice of venue.

"To be honest we only got word of the pitch yesterday," she told RTÉ Sport's Pauric Lodge.

It's clearly then not a topic that is playing on her mind a few days out from the start of competitive action.

"We trained yesterday [Tuesday], train again on Thursday and the game is on Saturday. Is the venue an issue? Absolutely not.

"I don't think the facilities are an issue; we train up in DCU and the facilities in terms of playing are second to none. The pitches are stunning and are kept very well. Parnell Park, if the crowds were going to be as big as in previous years, would probably be better suited.

"Otherwise, for us a team we are not focussing on the venue. Maybe on the outside it's an issue for some people."

2022 was a frustrating year for the Mick Bohan's Dubs. They relinquished their Division 1 title and then lost to Donegal at the quarter-final stage of the TG4 All-Ireland championship.

For Rowe, who missed the last two league campaigns with injuries, the start of a new season is one that she is relishing.

"Between the matches coming back and the refreshment of our panel with a lot of new faces involved, the excitement is huge," she added.

"The younger girls are helping to create and even more positive set-up and they are pushing the rest of us on. There is a great environment now to operate in and for me personally I'm really enjoying it. We're enjoying the hard work because we know it will pay off in the long run. All the panel have done the same amount of conditioning ahead of the Meath game."

Focus is very much a key word for Rowe in advance of the weekend. Last summer's loss to Donegal did hurt and the Clann Mhuire player makes no apologies for going down the route of cliché in what the approach will be in 2023.

"Our focus may have been on games ahead of the Donegal game. Now it's a case of one game and one training session at a time and making sure that we're building positively in each session. And from that our focus will be on the next game; otherwise you will be caught out."

Taking knowledge on board from other codes can also be helpful. So, did Rowe pick up anything when meeting Manchester United's newest recruit, Wout Weghorst, at Old Trafford recently?

She takes up the story: "I was over at Old Trafford for the derby game [against Manchester City]. We did the Old Trafford tour on Sunday. We had done all the parts and when we were out pitch-side, Wout Weghorst, their new signing, was getting his official pictures for their social media.

"He came over and I got a photo with him and Man United then took a photo of me getting a photo of him. That then went up on their social media. There has been a bit of slagging but also a good laugh about it.

"I didn't see it until I came out of work and this man had tweeted, saying: 'Is this Dublin's Carla Rowe with Man United's Weghorst?'

"I put up a post saying I have got a few tips on how to do good headers. I will bring them to ladies football soon." 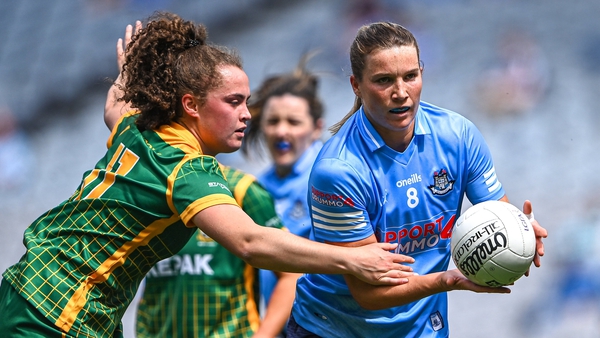