She was once nicknamed 'the Spanish Gooch' by Mícheál Ó Muircheartaigh.

The diminutive Spaniard has seen it all and done it all across Europe, but playing in an All-Ireland semi-final is the new dream now and she could move step closer with a win in Maastricht.

Monaghan’s Castleblayney Faughs stand in the way of Belgium’s Craobh Rua and an unprecedented slot in the final four but it won’t be for the want of trying for Rios and her committed teammates, who fight climate change by sending their CO2 emissions compensation money to BOS+ after every away day, in order to plant trees.

"I’m very nervous and excited at the same time. We are the underdogs but I am incredibly proud and happy to be part of this team and I’m confident we will show our best football," said Rios.

"I am convinced that, regardless of the result, we will be better footballers for playing this match."

Rios is from a town in the mountains of the province of Cadiz in the south of Spain - and she has played football for Gibraltar, La Coruna, and Sevilla.

But even before she picked up a Gaelic football, she had tried her hand at hurdle running, soccer, rugby, and handball, the latter of which she went on to represent PSV Eindhoven in the Netherlands.

"It was kind of a high-level team. Of course, my position changed because, in Spain, I was playing in the middle and there the average size of my players was 180cm so I went to the wing.

"It’s better to be somewhat small and mobile if you’re on the wings.

"It was very, very competitive playing for them. And also they have been playing together since they were young. So when I was there in my early 20s, and then trying to take the position of some people, it was not always easy."

Rios’ linguistic expertise and her job in the European Commission ensured she travelled throughout Europe and further afield. Her soccer career took shape when she was working in Russia.

Her path was slowly taking her towards Ladies football and through an Irish national, who was captain of her soccer team, she learned about Gaelic games.

Belgium GAA had been set up in 2003 and five years later Rios was there to witness the formation of their new Ladies football team. Barbara Wynne was the central figure behind all of this, and the Dublin native linked up with the likes of long-serving player Caragh O’Connor on St Patrick’s Day in 2008 to bring the plan to fruition.

"They decided to do an exhibition match and they called people that could be available," said Rios.

"And one person said to me, 'oh why don’t you come along?'. So I played the game. The first half, I didn't like it, because they wouldn’t pass me the ball. So in the second half, I decided to just run after the ball.

"I was diving for the ball because I didn’t know the rules, obviously it was my first match ever. But when I finished, the referee told me, 'oh, you could be a real player if you learn the rules'.

"And then also Barbara Wynne approached me and told me, ‘look, I’m thinking about creating a team for girls because Belgium GAA was created already but only for hurlers'.

It was the start of something special for a team and club that would go on to dominate the European landscape in Ladies football.

They have won 12 continental crowns since and have had representatives from 21 countries across the globe.

This year they got to this stage thanks to a brilliant victory over British champions Hugh O’Neill’s in Leeds two weeks ago.

And the team led by Rios, who is also joint manager, and Longford man, a former Galway U-20 All-Ireland winning coach Cosmos Gilmore, has a unique backstory.

Given their location in the administrative centre of the European Union, it has led to many interesting subplots, such as good luck messages on Twitter this week from their Honorary President, MEP Seán Kelly.

The team trains at Vrije Universiteit Brussel, the home of Celtic Rugby Club in Brussels, a base that actually works out well for the team considering the connected nature of the relatively small city.

"I had the opportunity of meeting an amazing, a lovely man and also a great coach that was Éamonn Ryan."

Their home pitch is too small for tomorrow’s fixture but Maastricht will be their adopted home, with special supporters’ buses chartered for the trip across the border.

Rios has played across the backline and midfield for Belgium but will likely line out up front against Castleblayney.

Her story has brought her to Ireland too, from weddings in Kerry and Down to birthdays on Clare Island, holidays in Donegal and Galway, foraging blueberries in Wicklow to even canvassing in Cork.

She loves Ireland and has even attempted to add Gaeilge to her language repertoire, while she has other unusual threads that tie her to the country and the game.

"I once had to mark Anna Geary when she was playing for Luxembourg," said Rios.

"I remember when they were telling me, 'Anay, that’s the one you’re going to mark'. And I was like she’s on fire in this tournament'. She was really on fire.

"Like I saw her afterwards playing camogie too but playing football, she was absolutely brilliant, brilliant. We had our fights on the field but at the end she was very nice. She was a nice girl and very competitive." 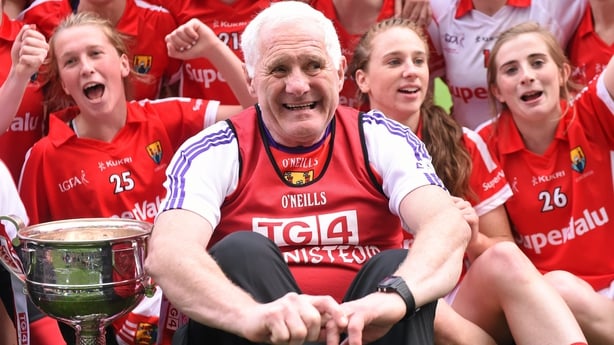 Rios gets emotional when she remembers another Cork great, the late former Ladies football supremo, Éamonn Ryan [pictured above].

"I had the opportunity of meeting an amazing, a lovely man and also a great coach that was Éamonn Ryan. I get emotional here because he’s not with us anymore.

"We invited him to come to Belgium. I cannot remember now, it was maybe through David Barrett, who is from Cork and also I think it’s a family friend.

"I learned a lot from Éamonn, not just sports wise when he was giving the training session, but he actually stayed in my house so I really had a few days knowing the person and he was just amazing.

"And also the way he was speaking about his players. He had so much admiration for all of them. So it was great that it was mutual because I am sure they have a lot of admiration for him but he was really like, you know, really devoted to them and we loved that."

Another great of the Gaelic games holds a fond place in Rios’ heart, and that is Mícheál Ó Muircheartaigh, who has commentated on a couple of Belgium games in the past.

She jokes that when she kicked a wide during a game against Paris Gaels, Ó Muircheartaigh gave one of his brilliant lines: 'The Spanish Gooch kicks for the point but the ball goes to Spain'.

Hopefully, tomorrow, Rios and her teammates can find their range instead.