Dublin ace Carla Rowe says there is lots of hard work around the corner before the new season throws i as she looks to bounce back from the biggest disappointment of her career.

The Dubs were shocked by Donegal in the TG4 All-Ireland Senior Championship quarter-final and missed out on the opportunity to face eventual champions Meath in the final four.

It was a devastating blow for Mick Bohan's side, who have not lifted the Brendan Martin Cup since 2020, when they claimed their fourth in a row.

And the 27-year-old, who is a Lidl ambassador and mentor for their #SeriousSupport Schools Programme again this year, knows Dublin must improve.

"Hard work is where (we start). Ah, last year was the biggest disappointment of my footballing career," said Rowe.

"I said that last year but since a lot of us have started playing with Dublin, I know, myself, I have been very lucky to get to All-Ireland finals, even underage.

"So, last year was the first that we’ve ever been, well I’ve ever been, knocked out in an All-Ireland quarter-final or anything like that. There was a lot of self-reflection done.

"Look, we’ll regroup, we’ll come back hopefully stronger. But we have a lot of work to do." 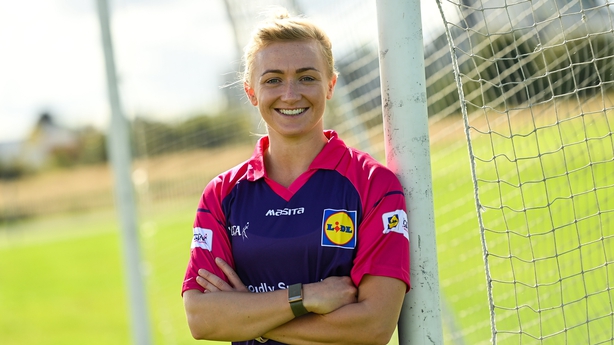 Rowe, who was Dublin’s co-captain in 2022, scored 1-03 when the Sky Blues secured their last TG4 All-Ireland Senior Championship with victory over Cork in the decider. And she hit the same score when Dublin fell to defeat at the hands of Donegal in July.

Donegal were beaten by Meath in the semi-finals before the Royals secured their second successive crown. However, Meath have lost a couple of star players and the bulk of their management team since then.

"Change either does one thing or another. It can be really positive and it revitalises a group or it can be an area where it’s kind of rebuilding and every team can go through that," said Rowe.

"So, I’m not so sure what way they’ll do it. Obviously, Vikki Wall and Orlagh Lally are two central players for them. They’ll have to deal with that and get a good pre-season under their belts. But for us, we will just be concentrating on ourselves."

And Rowe is focusing on her teaching and studies for now, while she looks forward to another year as a Lidl ambassador and mentor for the #SeriousSupport Schools Programme which is now open for nominations.

"You can nominate your school to be part of the #SeriousSupport programme and you get a visit from an inter county ladies Gaelic footballer," said Rowe.

"We come out for two days across the school year and work with groups of students in each school. It’s basically just trying to promote sport and well-being and how they have positive effects on physical and mental health.

"So, it’s kind of promoting that through a fun interactive programme where we get to go to numerous schools and meet lots of lovely students."