It capped the perfect year, her decision to return to the inter-county fold and just before she jetted off Down Under, Emma Lawlor was overwhelmed leaving the Croke Park pitch.

The victory over Wexford also ended a barren spell for Laois on All-Ireland final day, dating back to 2001, when her own aunt was one of the mainstays for the O'Moore County.

Laois and Lawlor have been on a journey since then and it was almost like destiny had conjured up the perfect occasion to land the TG4 All-Ireland Intermediate Championship in front of her whole family.

"My family are a big football family," said Lawlor. "My auntie is Tracey Lawlor – she has four All-Stars and was the person I really looked up to the whole way.

"I was only very young but my nanny and granddad would have brought me to all of her matches. Just seeing her playing, she was amazing. I always said that I wanted to be just like her. She was really my inspiration.

"My dad Declan trained me since I was five too. He was over my club team and he is still over it. My family is how I got into playing football. They keep me going and they keep the hunger there.

"They really got me into it and as I said, I’m playing since I’m five so you have to really love it if you are playing it that long."

The 21-year-old actually missed out on Laois’ run to the intermediate semi-finals last year, along with their triumph in the Division 3 final.

"It was hard to step away from the panel last year, after playing with them since I was 16, but I think the year out made me hungrier for football"

When Covid-19 struck, she saw an opportunity to help out in the local nursing home and she upskilled as a healthcare assistant to dedicate her time to the cause.

It was a huge effort and while Lawlor’s promising inter-county career had to take a back seat, she maintained her club football with St Paul’s and she was also able to play for DCU.

Lawlor had joined up with Droimnín Nursing Home in Stradbally, where she devoted much of her time to caring for the elderly.

"I wasn’t able to commit to football as much as I wanted to because I was working four or five 12-hour shifts a week. I was working a lot of nights then as well. And with how bad the pandemic was, I felt I couldn’t really leave it," said Lawlor.

"I did all the courses for healthcare assistants and then I went and worked with them. I was aware of that particular nursing home and I knew they were struggling at the time of the pandemic.

"I also knew the director of nursing well there so I just said I would go in and get the courses done for the pandemic.

"It took two months to get the ball rolling. The courses were one after the other because everyone was trying to get them done. Everyone was training to be a healthcare assistant at the time.

"It was hard to step away from the panel last year, after playing with them since I was 16, but I think the year out made me hungrier for football. It got the passion back that I really wanted to play football.

"The break was the best thing ever and once you take that break, you want more (football)." 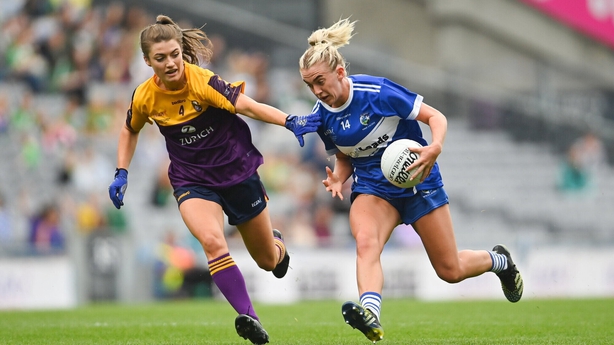 Laois manager Donie Brennan phoned Lawlor before the start of the season and she was eager to get back into action.

She had already tasted what it was like to play alongside class forwards like Meath’s Emma Duggan and Dublin ace Carla Rowe in college, and she wanted to take some of her new expertise into the Laois set-up.

"I was playing O’Connor Cup there and we got to the semi-final before UCC beat us," said Lawlor.

"It definitely made me a better player playing along with them. Even the set-up was so professional. When you are in that group and backroom team it makes you a better player because you are playing with some of the best in the country.

"It will make you the best player you can possibly be and that has really, really helped my football career so far. It was really good to get the chance to play with those players and be on the O’Connor Cup team because you see different things.

"You have your basic nutrition and strength and conditioning and all with county but up there it’s different and coming back then to Laois I had a totally different mindset.

"People coming in and talking to us about mental health and stuff like that. There are so many different aspects to it than just playing football and training. We had speakers coming in and we had nutrition talks and strength and conditioning talks. Then we were doing our own gym sessions and all that.

"It has really opened my eyes to different aspects of the game and not just playing football."

"It is great to be back playing the likes of Dublin and Meath in Leinster now, that is where everyone wants to be playing"

Lawlor combined with a ruthless attack for Brennan’s side in 2022 and it yielded rewards right the way through before Laois went to Croke Park last week and defeated Wexford 1-13 to 1-11 in a thriller.

"Donie said when he came in three years ago, he wanted to get us back to playing senior football. It might have taken three years but we are there and the hard work that we have put in and the feeling after the match, it’s just indescribable, it was amazing. When that hooter went we were all just relieved and over the moon.

"The girls will be looking forward to it and I will be cheering for them from Australia."

Lawlor heads to Sydney in November with her boyfriend Justin, a trip they have longed to take but only at the right time. And there is no time like the present.

"He has always wanted to go. I said I would finish my first degree first, I have been studying since I did my Leaving Cert, I went straight into college and never took a gap year.

"I said I would take a year or two break now and go and see what it’s like. I will definitely play with Laois again when I come back from Australia."