By Peter Branigan at Croke Park

Meath are TG4 All-Ireland champions for the second time after a 3-10 to 1-07 win over Kerry at Croke Park.

They were 1-02 behind before they really got going, but they would lead from the 13th minute until the end, as goals from Emma Troy, Niamh O'Sullivan and Bridgetta Lynch saw them defend their crown.

The old line about great teams being able to do it more than once now rings true for this group of Meath players, whose determination to prove that last year was no flash in the pan saw them put in their best performance of the summer.

After a brilliant start, Kerry's challenge faded in the second half as the Royals' defensive structure proved too difficult to consistently break down. While the women from the Kingdom couldn't have asked for a better opening five minutes, but in truth they were second best for large swathes of this game.

It didn't look like that would be the case in the early stages as Kerry stormed ahead. Ciara Murphy had opened the scoring for them, before Louise Ní Mhuircheartaigh slotted a free.

Things got better moments later when the Corca Dhuibhne woman intercepted a Meath kickout, getting in ahead of Katie Newe. The Meath defender got back goal- side, but Ní Mhuircheartaigh backed herself, turning Newe inside out, before finishing superbly to the net with a looped effort.

Meath responded like champions though and they were level just five minutes later. Stacey Grimes had opened their account with a free, but the goal arrived after a great run by Kelsey Nesbitt.

She cut in from the right and the Kerry defenders couldn't get a hand in on her. She had space for a shot from distance, but elected to play a ball through instead. Emma Troy grabbed before burying it from close range.

The Royals completed the turnaround moments later when Wall landed a free in the 13th minute - it was a lead they would not relinquish. They added a further five points before half time as their swarming defensive structure, mixed with their lightning fast ability to break, saw them pull clear.

Vikki Wall once more illustrated why her departure will be such a loss, not only to this team, but to the game itself, as her powerful running from midfield drove the team on.

The gap was three at the break, as Emma Duggan dropped a couple of shots short, either side of a missed Grimes free, but you sensed that Meath weren't in top gear just yet.

Kerry had narrowed the gap to the minimum just after the resumption, but they couldn't push on from there. An attack in the 40th minute perfectly encapsulated their growing frustration as Lorraine Scanlon's eventual shot dropped short.

A couple of minutes later the Royal defence swallowed up Anna Galvin after a lovely lay off from Ní Mhuircheartaigh. The free out for over-carrying was met by fist pumps from the Meath players, and a huge roar from their support.

And they then showed how dangerous they could be at the other end as they killed off the game with two goals in three minutes.

The first came about once more after they stole a Kerry kickout. They smelled blood as they stormed forward, working the ball through the hands - Duggan, to Lynch, to Grimes, who could have taken a shot herself, but she unselfishly fisted it off to O'Sullivan to palm home to the empty net.

And the contest was effectively over when Lynch finished from close range. Once again Grimes was the provider as she played a ball in for the Oldcastle player to score. Her initial effort came back off the bar, before falling nicely for her to bury the rebound home from close range.

From there, they saw the game out to finish their season as All-Ireland and league champions, and remove any doubt that they're the best team in the country. 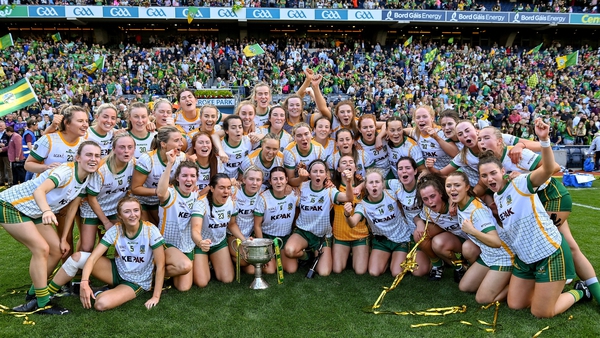