In a repeat of last year’s decider, 2011 winners Carnacon wrestled the Dolores Tyrrell trophy back from Monaghan outfit Donaghmoyne, who registered a massive tally of 16 wides at Páirc Sean MacDiarmada in Carrick-on-Shannon.

Staunton may have notched all but one point of her side’s winning tally in a low-scoring encounter but her direct opponent, Sharon Courtney, was defensively brilliant nonethless, producing a series of magnificent blocks to keep the Mayo forward at bay on numerous occasions.

Staunton managed just a point from play in the final 12 months ago, with Courtney superb in a direct marking role, but she managed to escape for three points from play in this tense rematch.

For Carnacon, this is a fifth All-Ireland senior crown and sweet revenge for their 2012 final defeat.

But Donaghmoyne, who had memorable displays from the Courtney sisters Sharon and Cora, will look back and wonder how they left the chance of back-to-back crowns slip away.

Profligacy in front of goal was the main reason as by half-time, they had racked up 13 wides, including seven within the opening ten minutes.

The wides tally had reached double figures by the 23rd minute and Donaghmoyne were also frustrated by their inability to raise a green flag. 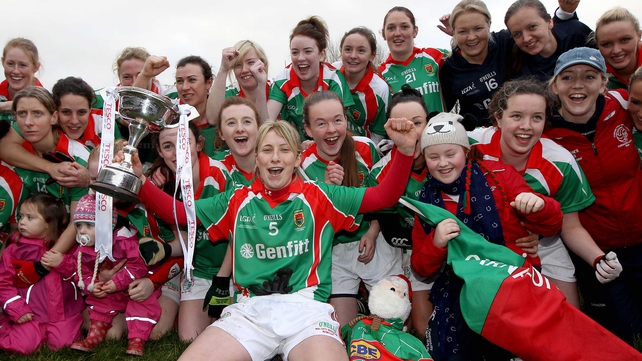 In the 12th minute, Niamh Callan saw her gilt-edged goal chance saved by Carnacon goalkeeper Michelle Higgins and Fiona Lafferty shot straight at Higgins early in the second half.

Donaghmoyne were also unlucky in the 45th minute when Lafferty’s effort struck the post with a goal for the taking.

Chances for Carnacon were not as plentiful, with Staunton registering five of their six wides, including four from placed balls.

But the nine-time All Star kept held her nerve to net the only goal of the game in the 35th minute, after the sides were level at half-time, 0-03 apiece.

Donaghmoyne corner back Hazel Kingham was adjudged to have fouled Aoife Brennan and from the resultant penalty, Staunton slammed her shot straight down the middle and over the head of Donaghmoyne’s Monaghan netminder Linda Martin.

That goal handed Carnacon a 1-03 to 0-04 lead in front of a healthy attendance in county Leitrim.

But in a tie that was level six times, Donaghmoyne responded with points from Rosemary Courtney and captain Majella Woods to ensure parity.

Staunton edged Carnacon ahead again but two frees from ace Monaghan forward Cathriona McConnell, who was held scoreless from play, had Donaghmoyne 0-08 to 1-04 in front.

Michelle McGing became the only player other than Staunton to register a point for Carnacon in the 48th minute but Staunton would have the final say with a majestic point from play ten minutes from the end.

In a frantic finish, Donaghmoyne could not find the leveller which would have taken the final to a replay next week and instead, it was Carnacon who travelled home to the west with the precious silverware in their possession.

Another of Carnacon’s Mayo stars, Fiona McHale, was presented with the player of the match award for an industrious contribution.

Noelle Tierney was another to shine for Carnacon, in a rock-solid defence, but Staunton grabbed the headlines once again with yet another match-winning contribution.