Matt Gay kicked a 30-yard field goal with 1:46 remaining and the Los Angeles Rams are headed to the Super Bowl for the second time in four seasons after notching a 20-17 victory over the San Francisco 49ers in their NFC Championship Game.

The Rams will now face the Cincinnati Bengals, who defeated the Kansas City Chiefs 27-24 in the AFC Championship, in Super Bowl LVI on 13 February and will have home advantage at their own SoFi Stadium,.

Travin Howard recorded the game-clinching interception with 1:09 left as Los Angeles snapped a six-game losing streak against the 49ers. Cooper Kupp caught 11 passes for 142 yards and two touchdowns, and Matthew Stafford completed 31of 45 passes for 337 yards, two touchdowns and one interception for the Rams.

The Super Bowl appearance will be the fifth in franchise history for the Rams, two of which came when they were located in St Louis.

Jimmy Garoppolo completed 16 of 30 passes for 232 yards and two touchdowns for San Francisco, who blew a 10-point lead in the fourth quarter. Deebo Samuel and George Kittle caught scoring passes, and Jimmie Ward had an interception.

After the score, San Francisco couldn't move the ball, and Aaron Donald's pressure forced Garoppolo to make a desperate under-handed toss that Howard picked off to seal the victory.

The 49ers led 17-7 after Garoppolo spotted a wide-open Kittle in the end zone and connected on a 16-yard scoring pass with 1:59 remaining in the third quarter.

Los Angeles responded with Stafford tossing an 11-yard scoring pass to Kupp to cut the deficit to three with 13:30 left in the game.

The Rams tied the score at 17 on their next possession when Gay booted a 40-yard field goal with 6:49 left in the game.

San Francisco led 10-7 at half-time courtesy of Robbie Gould's 38-yard field goal as time expired. Gould has converted 21 of 21 field goals in the post-season during his career.

The Rams struck first when Stafford hit Kupp for a 16-yard touchdown on third-and-13 with 8:46 left in the half.

The 49ers knotted the score when Samuel caught a receiver screen from Garoppolo and shed four tackles along the way to a 44-yard touchdown with 6:10 remaining in the half. 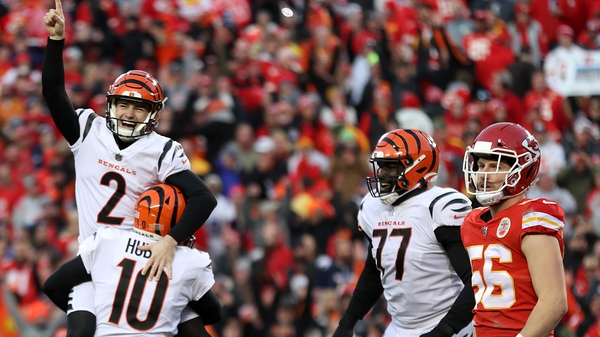