Green Bay Packers quarterback Aaron Rodgers was emotional upon his return to the football field on Sunday as the three-time most valuable player helped his team to a 17-0 win over the Seattle Seahawks in the National Football League.

Rodgers was removed from the NFL's reserve/Covid-19 list on Saturday after going through a mandatory 10-day quarantine following a positive Covid-19 test last week.

The 37-year-old, who is unvaccinated, sat out the Packers' loss to the Kansas City Chiefs last Sunday due to the NFL's Covid-19 protocols, which call for a mandatory 10-day quarantine period for unvaccinated players who test positive.

Rodgers completed 23 of 37 passes for 292 yards with no touchdowns and an interception in Sunday's game at Lambeau Field as the Packers (8-2) returned to winning ways.

"Most emotions from the whole night was probably walking off the field after the game.

"Definitely got me a little misty heading off. So that was good to feel all those emotions and good to be back with the guys."

Rodgers received widespread criticism for telling reporters in August that he was "immunised" when he was asked if he had been vaccinated.

Rodgers said he has an allergy to an ingredient in the mRNA vaccines produced by Pfizer BioNTech and Moderna Inc and so he declined to take those.

He did not take the Johnson & Johnson vaccine due to concern about side effects, he said.

The NFL on Wednesday fined the Packers $300,000 and two players, including Rodgers, $14,650 each for violating Covid-19 protocols. 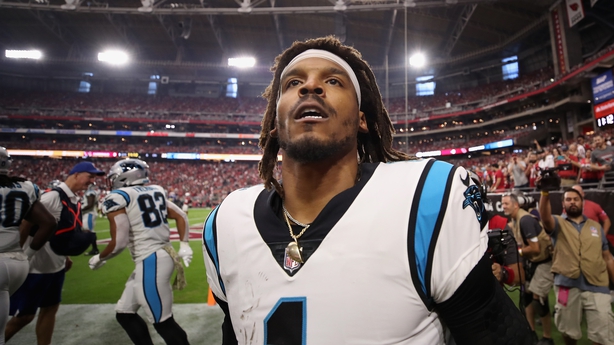 Cam Newton (above) ran for a touchdown and threw for a score in his first game back with Carolina as the Panthers stunned the Arizona Cardinals 34-10 Sunday in Arizona.

The Cardinals (8-2) had the best record in the league and one of the top defenses, but the Panthers scored 17 first-quarter points and were in control throughout the game.

Starting quarterback P.J. Walker did much of the work for Carolina, finishing 22-for-29 for 167 yards with an interception. Christian McCaffrey gained 95 rushing yards and 66 receiving yards for the Panthers (5-5).

It seemed unlikely Newton would play with such a short preparation window after the Panthers signed him Thursday. Instead, Newton scored the game's first points on a 2-yard run with 11:12 left in the first quarter. His second touchdown came on a two-yard pass to Robby Anderson later in the first quarter.

Tom Brady was intercepted twice as the Tampa Bay Buccaneers suffered a shock 29-19 defeat at the Washington Football Team.

The reigning Super Bowl champions were coming off a bye week looking to atone for their defeat against New Orleans two weeks ago.

But they were stunned by a team without a win in the last month on a difficult afternoon for seven-time Super Bowl winner Brady, who threw two picks in the first quarter.

Brady threw second-half touchdowns to Cameron Brate and Mike Evans, but Washington produced an impressive fourth-quarter drive that ended with Antonio Gibson's second rushing score of the game to put the result to bed.

Every touchdown from NFL RedZone in Week 10! 🏈 pic.twitter.com/G855JaLWRJ

Brady's former team the New England Patriots extended their winning run to four games with a stunning 45-7 thrashing of the Cleveland Browns.

Cleveland, who went into the game without top running backs Nick Chubb and Kareem Hunt, saw quarterback Baker Mayfield exit the game in the third quarter with a knee injury.

The Tennessee Titans still have the best record in the AFC thanks to a battling 23-21 triumph over the New Orleans Saints.

Titans kicker Randy Bullock kicked 11 points while quarterback Ryan Tannehill threw one touchdown and rushed in for another, before the defence held off a surging Saints in the fourth quarter to improve their record to 8-2.

The Buffalo Bills maintained their slim advantage over New England in the AFC East by swatting aside the New York Jets 45-17.

Buffalo responded to their embarrassing loss to the Jacksonville Jaguars last week in style, intercepting Jets quarterback Mike White four times while Josh Allen threw for 366 yards and two touchdowns for the Bills.

The Dallas Cowboys were another team to comprehensively bounce back from a defeat as they hammered the Atlanta Falcons 43-3.

Dak Prescott threw two touchdowns to CeeDee Lamb and rushed in for another, while running back Ezekiel Elliott also crossed the goal-line twice, ending any concerns the Cowboys had been figured out in their comprehensive loss to the Denver Broncos last Sunday.

Detroit Lions kicker Ryan Santoso missed a potential game-winning field goal in overtime as their winless run to start the season continued with a rare 16-16 tie with the Pittsburgh Steelers.

Elsewhere, the Indianapolis Colts improved to 5-5 with a 23-17 victory over the Jacksonville Jaguars and the Kansas City Chiefs won against the Las Vegas Raiders 41-14. 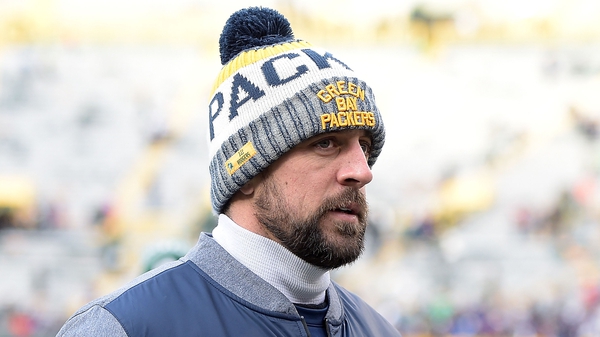