Professional sports in Minneapolis were effectively suspended on Monday following the fatal police shooting of a 20-year-old black man in the suburb of Brooklyn Center and subsequent outcry.

"Out of respect for the tragic events that occurred yesterday in Brooklyn Center, and following additional details in this evolving situation, the Minnesota Twins have decided it is in the best interests of our fans, staff, players and community to not play today's game," with the Boston Red Sox, the team said in a statement.

The shooting on Sunday of Daunte Wright during a traffic stop led to protests through early Monday morning in Brooklyn Center, Minnesota, as police fired tear gas and rubber bullets to disperse the crowd.

The city's police chief said the shooting appeared to be an "accidental discharge" after the officer drew her gun instead of her Taser during a struggle.

The mayors of Minneapolis and St Paul on Monday declared a state of emergency and set a curfew from 7pm to 6am. 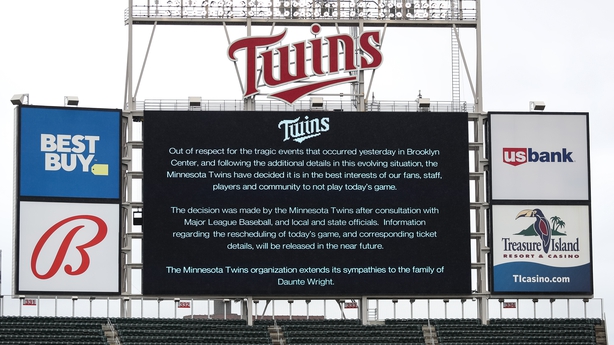 Following that announcement, the NHL and the Wild released a joint statement that they were postponing Monday night's game with the St Louis Blues. The game was rescheduled for 12 May.

The NBA said it decided after consultation with the Timberwolves as well as state and local officials that a game between the Minneapolis team and the Brooklyn Nets would also be postponed.

"I think we have to stop saying it's frustrating for all black Americans. I think we should be frustrated by all Americans," Philadelphia 76ers coach Doc Rivers told reporters on Monday.

"I don't know if it was a mistake or not. I saw the video - the bodycam video like everyone else. But I know the frustration is a real thing for everybody and for us."

"It just makes you sick to your stomach. How many times does it have to happen?" Popovich said before Monday's game against the Orlando Magic.

"As sick to our stomachs that we might feel, that individual is dead... And his family is grieving. His friends are grieving. And we just keep moving on as if nothing is happening."

The August shooting of James Blake, a black man fired on from behind seven times by a white police officer in Wisconsin, led the NBA to postpone its season in protest.

"As soon as people hear cop sirens, they fear," he said.

"We shouldn't have to fear getting pulled over by the cops because we never know if we're going to make it out alive or not."