Tom Brady said he would not be making any comparisons between his seventh Super Bowl win and others in his illustrious career, after the Tampa Bay Buccaneers swept to victory 31-9 over the Kansas City Chiefs.

The 43-year-old made it a magnificent seven with a dominant performance for his new team after a stellar 20-year spell at the New England Patriots, where he won six of nine appearances at the NFL's showpiece event.

"I think they're all special," he said.

"It's been an amazing year. We got off to a good start, 7-2, then we had a little rough stretch where we kind of found our identity.

"We knew we were playing a great football team tonight and we got the job done, so you want to get this far, you've got to get the job done and we did it."

Brady and former Patriot Rob Gronkowski, who came out of retirement to play for the Bucs, dazzled in the post-season again, with the pair combining for two touchdowns in the first half.

The number 12, the second quarterback to win a Super Bowl with multiple teams, also tossed to Antonio Brown for another touchdown just before half-time as the Bucs took a 21-6 lead into the break.

He said: "I'm so proud of all of these guys out here, everything we dealt with all year.

"We had a rough month of November but BA (Bruce Arians, head coach) had all the confidence in us, the team had a lot of confidence and we came together at the right time.

"I think we knew this was going to happen, didn't we? We ended up playing our best game of the year." 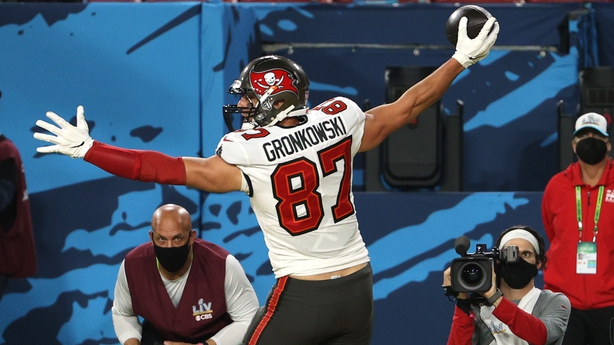 Kansas City failed to get started on offence, with Patrick Mahomes only completing 26 of 49 attempts for 270 yards, while a lack of discipline also played a role as the Chiefs gave up 11 penalties for 120 yards in Florida.

But credit also has to go to Tampa's defence, the same which dulled the attacks of Drew Brees and his New Orleans Saints and Aaron Rodgers and the Green Bay Packers in the post-season on their way to the Super Bowl at their home stadium.

Tampa's 11-5 record meant they had to take the hard way to the Super Bowl as the New Orleans Saints took the NFC South with a superior 12-4 record.

Three road wins meant Tampa gained the chance to play for the league's biggest prize at home in front of a Covid-restricted crowd of 25,000 fans.

Harrison Butker opened the scoring for the Chiefs with a field goal - and would go on to make two more - but it was largely one way traffic.

Leonard Fournette scored Tampa Bay's fourth touchdown as they continued to pull away into the third quarter, the running back finding the endzone with a 27-yard rush.

Mahomes and the Chiefs became increasingly desperate and his second interception on Kansas's last drive capped a miserable night, before red, white and black confetti fell onto the field when time expired.

Kansas head coach Andy Reid said: "My hat goes off to the Tampa Bay Buccaneers for the job that they did.

"You just can't do the things that we did and beat a good football team like that, particularly at this level."