The Brooklyn Nets lost Kevin Durant to Covid protocols in the third quarter and ended up losing their match against the Toronto Raptors as well in the NBA on Friday night.

The Raptors scored a hard-fought 123-117 away win, with Pascal Siakam leading the way with 33 points and Kyle Lowry scoring 30, but the match was dominated by confusion surrounding Durant.

The NBA said Durant had tested negative for coronavirus three times in the 24 hours leading to the game.

However, a test returned by someone Durant had interacted with in the afternoon had come back as inconclusive before the game.

Durant was still cleared to play by officials and played a strong 19 minutes, for eight points, six rebounds and five assists.

But he was stood down for the remainder of the game after it was learnt another test on the person he had interacted with had come back positive.

Durant let his displeasure be known on Twitter, saying his removal was a result of a "wack a**" PR effort by the NBA to protect its image. 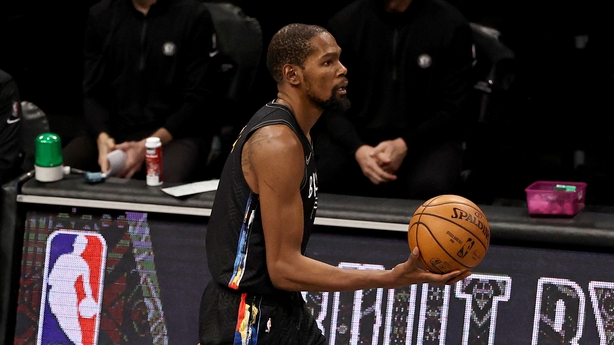 Meanwhile, the Utah Jazz scored a 138-121 win at the Charlotte Hornets.

LaMelo Ball had 34 points and eight assists for Charlotte, while Gordon Hayward had 25 points and 10 rebounds.

The Boston Celtics scored a thrilling four-point win over the Los Angeles Clippers, 119-115, as Jayson Tatum went on a three-point spree.

The Celtics held off the fast-finishing Clippers with Tatum scoring 34 points, including five three-pointers, and Kemba Walker scoring 24.

Kawhi Leonard led the Clippers with 28 points and 11 rebounds but missed all five of his three-point attempts while his side's usual long-range specialist, Paul George, sat out the game with a foot injury.

In other games, the New Orleans Pelicans won at the Indiana Pacers in a thriller, 114-113, the Milwaukee Bucks won 123-105 at the Cleveland Cavaliers, the Phoenix Suns beat the visiting Detroit Pistons 109-92, the

Miami Heat won 122-95 at home to the Washington Wizards, the Orlando Magic beat the visiting Chicago Bulls 123-119, and the Minnesota Timberwolves won 106-103 at the Oklahoma City Thunder.