Just two years ago, Tom Brady sought out Patrick Mahomes after the AFC Championship Game to console the youngster and provide encouragement.

Mahomes hasn't lost a play-off game since that conversation, and he will look to lead the Kansas City Chiefs to their second straight title when they face Brady and the Tampa Bay Buccaneers in Super Bowl LV on Sunday in Tampa's Raymond James Stadium.

The Buccaneers will be the first team in Super Bowl history to play in their home stadium, while the Chiefs are looking to become the first repeat Super Bowl champs since Brady's New England Patriots were the victors after the 2003 and 2004 seasons.

"It was important because it showed I was doing things the right way," Mahomes said while reflecting on the conversation.

"As a young quarterback in this league, you show up early and you try to put in the time and put in the work.

"Him saying that he respected what I was doing and how I was playing on the field and the type of person I was, it kind of put a stamp on me that I needed to go in and even be better in order to get to the Super Bowl."

Now Mahomes stands in the way of Brady's hunt for his seventh Super Bowl ring. Sunday will mark Brady's record 10th appearance in the big game.

Brady won six Super Bowl crowns with the Patriots but departed after last season as a free agent and signed with the Buccaneers.

The 43-year-old enjoyed a big season as he passed for 4,633 yards and set a franchise record with 40 touchdown passes in the regular season. And his motivation level is high as he looks to help Tampa Bay win its second Super Bowl title.

"My life has taken certainly a lot of different directions," Brady said.

"I'm obviously older now. I've got a family. A lot of incredible blessings in my life. Fast-forward 21 years, sitting in Tampa and trying to win a Super Bowl in our own home stadium would be pretty sweet." 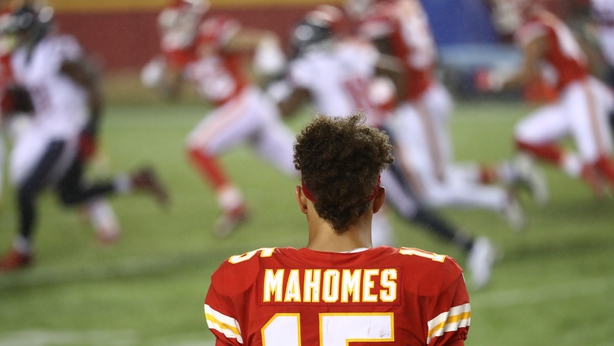 Brady passed for 345 yards and attempted to lead his team back from a 17-point, fourth-quarter deficit in that contest.

Chiefs receiver Tyreek Hill had a game for the ages with career bests of 269 receiving yards on 13 catches.

He also matched his high of three touchdown receptions.

Hill had an astounding 203 yards in the first quarter as Tampa Bay cornerback Carlton Davis struggled to cover him.

Davis expects to fare much better in the high-stakes re-match.

"I'm going to bring the same mentality," Davis said. "I'm always going to be myself. It didn't work out the first game as far as what we did and our game plan, but we've corrected it and we've got a great game plan going in. But I'm going in with the same mentality and that's to dominate."

The Chiefs will be without left tackle Eric Fisher (Achilles) after he sustained a serious injury during the AFC title game against the Buffalo Bills. Mike Remmers will move from guard to start in place of Fisher.

Among other Kansas City standouts are Travis Kelce - who set a record for tight ends with 1,416 yards in the regular season - safety Tyrann Mathieu (six interceptions) and defensive end Chris Jones (7.5 sacks).

"I'm still part of the 'Geritol Crew' and we are a little bit older, and there is experience that comes with that and I guess they say wisdom with age," Reid said this week.

"By chance, a few of the older guys have gotten to this point. I attribute that to good players and then a little bit of experience there."