All eyes will be on the Raymond James Stadium this Sunday as the reigning champions roll into town looking to prevent the record-breaking 43-year-old former New England Patriots star winning a seventh ring.

The sight of Brady hoisting the Vince Lombardi Trophy aloft would bring a sense of familiarity at the end of a strange NFL season, but Mahomes is determined to flourish in Florida and build on last year’s triumph at Super Bowl LIV.

"The goal is to win as many Super Bowls as possible and be playing this game every single year," the supremely talented 25-year-old said.

"So, I’m going to have that mindset every single time I hit the field as I’m trying to win it.

"We don’t look that far ahead. I’m focused on this game right now, trying to win this second Super Bowl and be able to hold that Lombardi Trophy and have that second ring.

"But if I’m at the end of my career and I had a lot of Super Bowl rings on my hand, I’ll be happy."

The Chiefs quarterback understands the fascination with his clash with the Bucs veteran, who is preparing for his 10th Super Bowl appearance on Sunday, but he's not getting wrapped up in it.

"I mean as far as the chatter goes, you understand why the talk is that’s all here and you understand how great Tom Brady is that it’s a big game to play in a Super Bowl against him," Mahomes said.

"But at the end of the day, this is another football game." 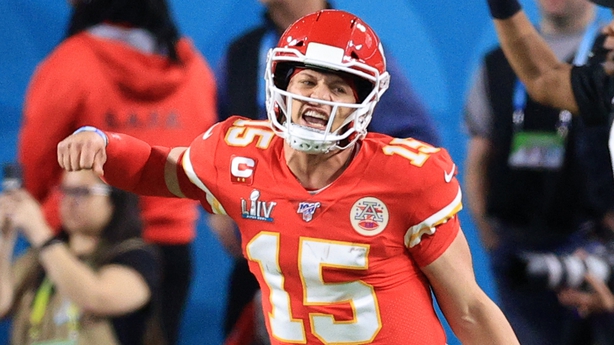 Asked if he played the game to be greatest ever and what role this Sunday could play in his long-term legacy, the Chiefs quarterback said after a pause: "Yeah, I mean, it’s a big question.

"For me I focus on the now, what I can control, and that’s going out there and being the best player, and the best team-mate that I can be on Super Bowl Sunday.

"That’s going to take great practices during the week and that’s going to take the best effort I could possibly give on Sunday. It’s going to be a great game with two great teams. If I leave everything I have on the field for my team-mates at the end of the day I’ll be happy."

The Chiefs are attempting to become the first team to win back-to-back Super Bowls since the Brady-led Patriots in 2003 and 2004.

Few teams in history have achieved the feat but there is a drive for excellence within the locker room that complements the talent driving Andy Reid’s team forwards.

"I think the thing I’m most proud of is that no one has become satisfied," Mahomes said. "No one’s become happy with winning one Super Bowl championship.

"I mean, everybody’s trying to make themselves better every single day and not trying to take a day for granted.

"You don’t have that in every single organisation and every single locker room, and I think that’s just come from the culture that Brett Veach (Chiefs general manager) and coach Reid have kind of instilled in us and that’s to get better at least one per cent every single day.

"That’s why I think we’re in this game, and we have a chance for another Super Bowl championship."

The Chiefs’ third ever Super Bowl victory would be an great way to start what is shaping up to be quite a month or so for Mahomes as his fiancee Brittany is expecting their first child.

"We’re extremely ready, we’re excited," he said. "We have all the things planned out and every single gadget and toy you can have to be great parents.

"But at the same I’m trying to tell her to hold off until after the game!

"But whenever it happens it happens but if we can wait to maybe a few weeks after the game that would probably be ideal."