The first signs that this is going to be a very different Super Bowl week came early on Monday when the usually glitzy Opening Night festivities were replaced by a dry mid-morning kick-off to US sport's biggest party.

Before Covid-19 forced a rewrite of the Super Bowl program, the script called for airport photo opportunities followed by some Opening Night zaniness to lighten the mood prior to teams getting down to the serious business of preparing for Sunday's National Football League championship game.

But this year, to limit exposure to Covid-19, the reigning champion Kansas City Chiefs will not even arrive in Tampa until Saturday while the Buccaneers, the first team to play in and host a Super Bowl, began the week in virtual solitary confinement fielding questions on Zoom.

At past Opening Nights, fireworks and thumping music provided the soundtrack as thousands of gridiron fans paid for the pleasure of watching media from around the globe do their jobs -- asking questions.

A televised prime time question-and-answer free-for-all for thousands of media in a packed arena where very little was out of bounds, Opening Night for some players and coaches was a grim obligation but most had grown to embrace the madness. 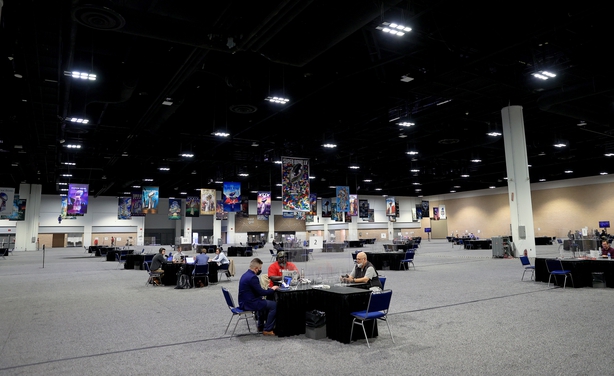 The entire event on Monday, however, had all the buzz of a shareholder meeting.

There were plenty of Super Bowl-related questions but none of the memorable weird and whacky sound bites from questions asked by interlopers dressed as super heroes and super models.

For Super Bowl veterans like Tampa quarterback Tom Brady, who will be playing in his 10th championship game, there seemed to be disappointment as he stared blankly into a screen instead of out on dozens of cameras and hundreds of media.

"How come I don't get to see them at all, how come I just get to see me?," quizzed Brady. "It's a crazy media day. I'm sitting here in an empty room

"It's very different than the other nine experiences."

The 43-year-old Brady did not have to field any proposals from an interviewer wearing a wedding dress or take questions from an impersonator wearing a Tom Brady mask asking what he thinks of Tom Brady.

This year Media Day was all business.

Rob Gronkowski, the Bucs gregarious tight end who normally basks in the glow of the spotlight, also acknowledged that this year's experience was not quite the same.

"I'm just sitting here in a room by myself right now," he said. "There's no one around, so like the juices aren't flowing as much as if you're in a room with media people going crazy, asking questions, fans cheering, music going.

"It still is Super Bowl Week but it is totally different and, for a guy like myself, you appreciate all that, all that media, all that attention, like all that excitement.

"But I mean we're in a pandemic right now."