Two periods of overtime were needed to split the Brooklyn Nets and Cleveland Cavaliers, with the new look New Yorkers falling 147-135.

Kyrie Irving returned to the side and was joined by recent acquisition James Harden and Kevin Durant for their first game as the Nets' Big Three.

Durant led Brooklyn with 38 points, Irving added 37 and Harden 21, but all three were outscored by Cleveland's Collin Sexton who had 42 on the night, including 15 in the second period of overtime in the win.

Overtime was also needed in the game between the Atlanta Hawks and Detroit Pistons when John Collins blocked Jerami Grant's driving layup which would have won the game.

Collins scored 31 points in the 123-115 win for Atlanta, while Trae Young top scored for the Hawks with 38. 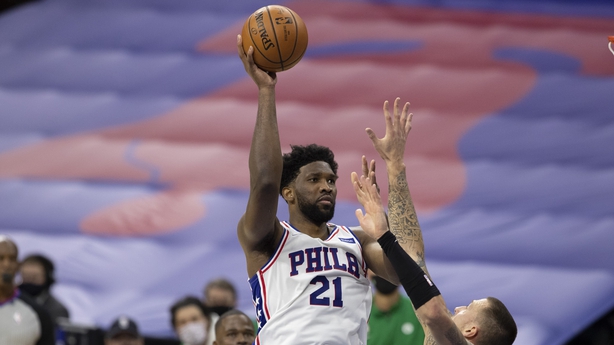 Joel Embiid, pictured above, scored 42 points and Tobias Harris added 22 as the Philadelphia 76ers overcame the Boston Celtics 117-109, while the Los Angeles Clippers extended their winning run to five with a 115-96 victory over the Sacramento Kings.

Cole Anthony hit a buzzer-beating three-pointer as the Orlando Magic defeated the Minnesota Timberwolves 97-96, Kendrick Nunn scored 28 as the Miami Heat beat the Toronto Raptors 111-102 and the Phoenix Suns eclipsed the Houston Rockets 109-103.

Steph Curry hit 26 points and had 11 rebounds as the Golden State Warriors beat the San Antonio Spurs 121-99, the Dallas Mavericks saw off the Indiana Pacers 124-112 and the games between the Washington Wizards and Charlotte Hornets, and the Memphis Grizzlies and Portland Trail Blazers were postponed.