Ben Roethlisberger had a night to forget as he threw four interceptions to help the Cleveland Browns record their first post-season win since 1994 on a scoreline of 48-37.

The Pittsburgh Steelers gave up seven points on the first play after kick-off when Maurkice Pouncey's snap went over the head of Big Ben and into the end zone where a grateful Karl Joseph fell on the ball.

Roethlisberger turned over the ball three more times inside the first quarter with interceptions, two of which led to Cleveland touchdowns.

The Browns were up 28-0 after the first quarter and 35-10 at the half, with Pittsburgh's first visit to the end zone coming through a one-yard rush from James Conner with two minutes left to play before the break.

Pittsburgh, who had opened the season with 11 straight wins but collapsed to a 12-4 record, regained some momentum after the half, with Roethlisberger slinging four touchdowns in the second half and passing for 501 yards but it was too little, too late. 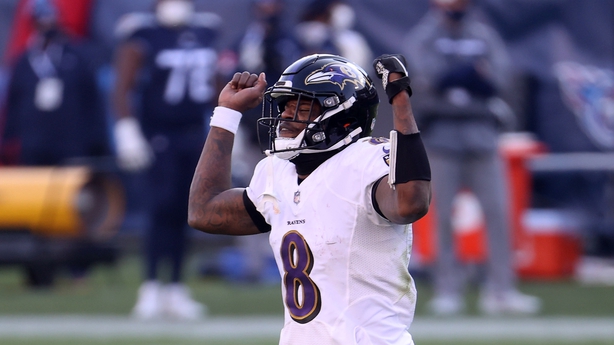 Elsewhere, Lamar Jackson broke his play-off duck as the 2019 NFL MVP led the Baltimore Ravens to a 20-13 victory over the Tennessee Titans.

Jackson had lost on both of his previous appearances in the post-season, the last coming 12 months ago when the Ravens – then the number one seed in the AFC – were stunned by the wild card Titans.

This time Tennessee had home-field advantage and raced into a 10-0 lead, but they struggled to get running back Derrick Henry involved – and ultimately had no answer for Jackson.

AJ Brown's 10-yard touchdown reception had the Titans looking strong early on, but Jackson broke free for a stunning 48-yard touchdown run to level the game at 10-10 at half-time.

Jackson then led Baltimore 77 yards down the field, with the 10-play drive finished off by running back JK Dobbins.

Both teams traded field goals to leave Tennessee trailing by seven with two minutes left, but hopes of taking the game to overtime were all but ended when Marcus Peters intercepted Ryan Tannehill.

Drew Brees threw two touchdowns as the New Orleans Saints swept past the Chicago Bears 21-9, with the win setting up a clash between two veteran quarterbacks with Brees facing Tom Brady's Tampa Bay Buccaneers in the divisional round.

New Orleans restricted the Bears to 11 first downs and 239 yards, while Jimmy Graham snared a 19-yard pass from Mitchell Trubisky as time expired for Chicago's only score of the game.