Journeyman quarterback Ryan Fitzpatrick achieved a rare feat as he carried the Miami Dolphins to a 31-13 victory against the Jacksonville Jaguars.

The 37-year-old, who has played for eight teams since being drafted as a back-up in 2005, became the first NFL player since 1950 to notch at least one win for six different teams against a single opponent.

He also became the first signal-caller in 72 years to have two passing touchdowns, one rushing touchdown, 20 rushing yards and a reception - which came from his own pass - in a single game.

Fitzpatrick was successful on his first 12 pass attempts as the Dolphins scored on each of their first three drives, taking a 21-7 lead at the half.

It was a less impressive evening for his opposing quarterback, with Gardner Minshew failing to ignite the Jaguars offence due to the Dolphins' aggressive pass rush.

Running-back James Robinson was a rare bright spot for the hosts as he collected 46 yards on the ground, six catches for 83 yards and a pair of touchdowns. 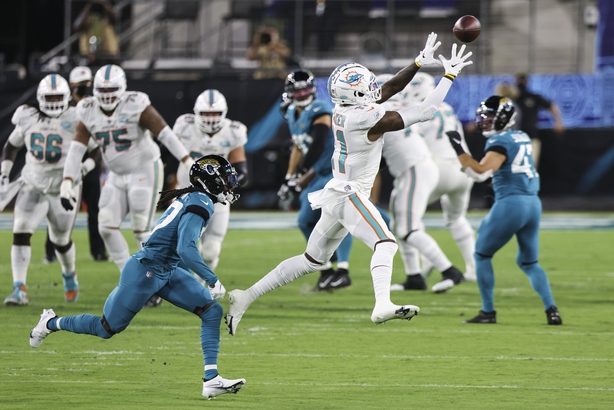