Reigning Super Bowl champions the Kansas City Chiefs started the new NFL season with a bang by recording a 34-20 win over the Houston Texans.

The Chiefs allowed less than 17,000 fans inside the normally rocking 75,000-seat Arrowhead Stadium and required the spectators to wear masks and stay socially distant during the game.

The first seven rows of the stadium were left empty to create a moat to prevent any transmission of the virus between fans and players.

The league has left it up to the 32 teams and local officials to decide if it is safe to allow spectators into their stadiums, with coronavirus outbreaks flaring in much of the country, where it has claimed more than 190,000 lives.

As the season starts, six teams have said they will have fans in the stands, including the Dallas Cowboys. Others like the Chicago Bears and Las Vegas Raiders have shuttered stadiums for the entire season.

Most are taking a week-by-week approach, leaving the door open for a possible partial return of spectators if or when conditions permit.

Since quarterback Patrick Mahomes and his team raised the Lombardi trophy in early February, the issue of racial injustice has exploded in the US.

It did not take long for the protests to make their mark on the league's 101st season as the visiting Texans left the field during the playing of Lift Every Voice and Sing, often called the black national anthem, and the Star-Spangled Banner.

The Chiefs remained on the field for both songs.

A section of supporters within the stadium jeered loudly as players from both teams linked arms before kick-off for what the league had described as "a moment of silence dedicated to the ongoing fight for equality in our country".

"There was no flag involved. There was nothing involved other than two teams coming together to show unity."

Kansas City Mayor Quinton Lucas took to Twitter in defence of his city.

"We’re a good city of good people. I heard boos too," he wrote.

"But we also have hundreds of thousands more around here who respect the message the players are sharing."

Only Chiefs linebacker Alex Okafor took a knee during the Star-Spangled Banner.

In July, the NFL said it would play both anthems before all Week One games. 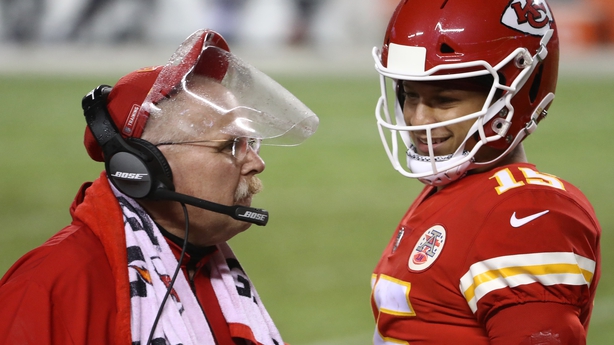 Mahomes, who was named Super Bowl MVP, threw three touchdown passes and had 211 yards as the Chiefs came from behind and stopped a late Texans rally.

The first score of the 2020 season went to David Johnson, who capped a nine-play drive with a 19-yard run as the Texans went into the first break 7-0 up.

But Mahomes hit Travis Kelce early in the second to draw things level, with a two-yard completion to Sammy Watkins putting the Chiefs ahead.

Clyde Edwards-Helaire had a 27-yard rushing TD, while Mahomes capped off his night with a three-yard pass to extend the lead to 31-7.