Will it be the old Philip Rivers or an old Philip Rivers?The answer to that question might not become apparent on Sunday when Rivers makes his first start for the Indianapolis Colts in their NFL opener against Jacksonville Jaguars.

But Indianapolis really needs the former instead of the latter if they are to realise their goal of bouncing back from a disastrous second half of 2019 that cost the Colts an AFC playoff berth.

Rivers has been the ultimate gamer over the past 14 years, making 224 straight regular-season starts for the Chargers while often playing with injuries.

In fact, he even answered the bell for the 2007 AFC title game in New England a week after tearing an ACL, a feat that probably never got the credit it deserved.

However, his 16th NFL season was a disappointment. Rivers threw 20 interceptions against only 23 touchdown passes for a team that was picked by some to win the Super Bowl and instead stumbled to last place in the AFC West.

Los Angeles waved goodbye to the 38-year-old and drafted Justin Herbert in the first round as his eventual successor. Rivers picked Indianapolis, coached by his old offensive coordinator, Frank Reich, as his landing spot to close a successful career that only lacks a Super Bowl.

And a major reason he did so was the Colts' offensive line. There were times as a Charger when Rivers was basically reduced to playing chuck-and-duck behind an inconsistent front wall. The likes of Anthony Castonzo and Quenton Nelson should keep him upright far more often.

"The fact that these guys played every game last year together and certainly have been together now for a handful of years... I think that's huge," Rivers said.

"It makes you feel good as a quarterback." 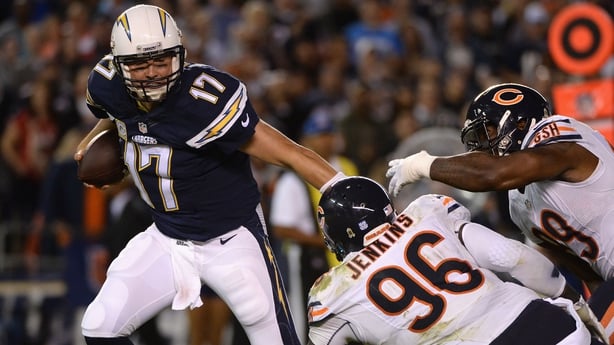 So should Indianapolis' running game. Marlon Mack rushed for a career-high 1,091 yards last year and could have a big game this week against a Jacksonville defence that some would say has been stripped and sold for parts.

And even with those guys around last year, the Jaguars were vulnerable to good running games. Mack and Jonathan Williams each piled up over 100 yards on the ground in a 33-13 win in Week 11.

But Jacksonville coach Doug Marrone, who starts his fourth full year with a franchise roundly expected to have the worst record in the league, is expecting good things.

"I really think this team can be special," he said. "I really do. We've got to go out there and win games, and I'm confident this football team will be able to do that."

If that's the case, second-year quarterback Gardner Minshew will likely have a lot to do with it. He is the Jaguars' guy for the long run, even if their offence might not have much run to it after letting top rusher Leonard Fournette go recently.

In fact, Minshew, who posted a nice 21-6 touchdown-interception ratio last year and went 6-6 as a starter, has been named a team captain.

"That's one of the highest honours you can have," he said. "It means everything."

Castonzo and centre Ryan Kelly were limited in practice on Wednesday for the Colts and are questionable for Sunday's opener.

Jacksonville will allow just under 17,000 fans to attend this game – about 25% of TIAA Bank Field's capacity.