The Washington Redskins announced Friday that they "will undergo a through review of the team's name," and sources told The Washington Post that the team is likely to change its name and mascot.

The switch could "potentially" occur in time for the 2020 season, one source told the Post, while another said "it's trending that way."

"It's not a matter of if the name changes but when," a source told the Post.

Owner Dan Snyder, who bought the team in 1999 for $800m, long has resisted calls to change the name. But in the wake of the surge in the fight for social justice, it appears Snyder is willing to listen.

In a statement, the team said the organization has held "initial discussions" with the league recently about the name.

"This process allows the team to take into account not only the proud tradition and history of the franchise but also input from our alumni, the organisation, sponsors, the National Football League and the local community it is proud to represent on and off the field," Snyder said in the statement.

"In the last few weeks we have had ongoing discussions with Dan and we are supportive of this important step," Goodell's statement read.

The Redskins play at FedEx Field, and the Memphis-based delivery giant wrote in a statement Thursday, as reported by multiple media outlets, "We have communicated to the team in Washington our request that they change the team name."

The company owns the naming rights to the stadium in Maryland under a 27-year, $205m deal that went into effect in November 1999.

FedEx has another major tie to the Redskins, as its founder/chairman/CEO Frederick Smith is a minority owner of the team.

Ron Rivera, in his first season as Washington's head coach, said he will take part in the review. 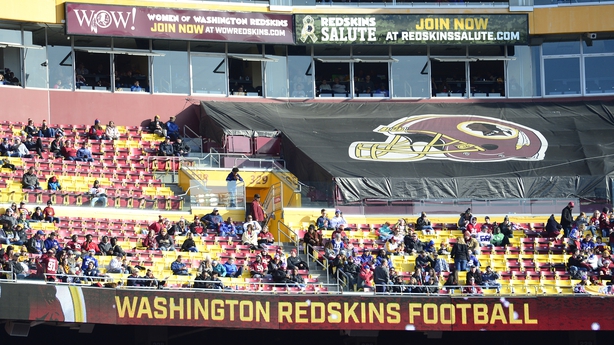 "This issue is of personal importance to me and I look forward to working closely with Dan Snyder to make sure we continue the mission of honoring and supporting Native Americans and our Military," he said.

"We believe this review can and will be conducted with the best interest of all in mind," the team's statement concluded.

Calls for the club to dump the nickname have been made for decades, but a 2016 Washington Post poll of 504 Native Americans found that 90 percent were not offended by the Redskins nickname. The poll included people in all 50 states and Washington, DC.

In 2013, Snyder made his position on the matter clear, saying, "We'll never change the name, it's that simple. NEVER - you can use caps."

The franchise began using the Redskins nickname in 1933, when it was based in Boston and previously called the Braves. Team owner George Preston Marshall moved the club to Washington in 1937.

A statue of Marshall was removed from the Redskins' former Washington venue, RFK Stadium, on 19 June in the wake of protests seeking racial equality following the death of George Floyd. Under Marshall's leadership, the Redskins were the last NFL team to integrate, adding their first Black players in 1962.

What the Washington football team potentially might be named is still up in the air. But in 2009, the Washington City Paper said Snyder previously bought the franchise rights for an Arena Football League team and registered trademarks for the name Washington Warriors with a logo and helmet design that featured an arrow and a feather.

Washington is scheduled to open the season at home against the Philadelphia Eagles on 13 September.