Indianapolis Colts quarterback Andrew Luck announced he is retiring from theNFL after seven years and six seasons, three weeks from his 30th birthday.

"This is not an easy decision," Luck said at a press conference after the Colts' loss to the Chicago Bears in Saturday night's pre-season game. "Honestly, it's the hardest decision of my life, but it is the right decision for me.

"For the last four years, I've been in this cycle of injury, pain, rehab... and it's been unceasing and unrelenting, both in-season and in the off-season. I felt stuck in it, and the only way I see out is to no longer play football.

"It's taken my joy of this game away," an emotional Luck added before pausing to collect himself. "I haven't been able to live the life I want to live."

Fans at Lucas Oil Stadium booed Luck as he walked off the field after the pre-season game, in which he was never expected to play. The initial news of his retirement broke midway through the second half.

"I'd be lying if I said I didn't hear it," Luck said of the fans' displeasure."Yeah, it hurt."

Luck, who turns 30 on 12 September, had already met with Colts owner Jim Irsay and had been seriously considering retirement for two weeks.

"I know a lot of range of emotions go through our fans, and that's a natural thing we can all relate to," Irsay told reporters in a joint press conference with general manager Chris Ballard and head coach Frank Reich after Luck spoke.

"Again, we have nothing but gratitude and thankfulness for the blood, sweat and tears he's spilled as No 12, and part of our heart's broken tonight. But we know we must go forward."

"For those people that booed tonight, I want you to - it's an emotional time," Ballard said. "And I understand that. But this young man has done a lot for the city of Indianapolis and for the Indianapolis Colts. Nobody died. We keep moving forward, and that's what we'll do. And we'll make this city proud."

Luck has been battling an ankle injury for four months that took the team a while to properly diagnose. It was initially called a calf issue before the ankle was determined to be the problem earlier this month. He did not practice in full during training camp, and his availability for the season opener was in doubt.

He also missed parts of the 2015 and 2016 seasons and the entire 2017 campaign with a recurring shoulder injury that required one surgery and additional treatment in Europe. 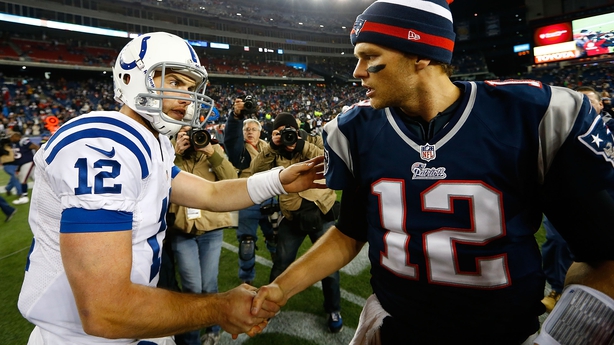 The No 1 overall pick out of Stanford in 2012, Luck was widely considered the best quarterback prospect to enter the NFL since Peyton Manning in 1998. He went to the Pro Bowl and helped the Colts to the play-offs in each of his first three seasons, making an AFC Championship appearance in 2014, the same year he led the league with 40 touchdown passes during the regular season.

Luck missed nine games in 2015 and one in 2016 before sitting out all of 2017 after his recovery from shoulder surgery didn't go as planned. He later told reporters he initially hurt his throwing shoulder in 2015 and had played through pain while compensating with an altered throwing motion before finally having surgery after the 2016 season.

Back healthy in 2018, Luck won the NFL's Comeback Player of the Year award after starting all 16 games and throwing for 4,593 yards, 39 touchdowns and 15 interceptions. The Colts closed the season with nine wins in 10 games,rallying from a 1-5 start to reach the playoffs before falling in the divisional round to the Kansas City Chiefs.

"It's been hard to digest, but we do celebrate his career," said Reich, who is entering his second year as the Colts' coach. "Being in that room with him for the last 18 months was just the experience of a lifetime... one of the truly unique players to ever put on an NFL uniform and certainly to wear that horseshoe proud."

Jacoby Brissett, who started 15 games in Luck's place in 2017, will be the Colts' starter moving forward. The 26-year-old has completed 59.1 percent of his passes for 3,500 yards, 13 touchdowns and seven interceptions in 23 games(17 starts) across three seasons.

He sat out Saturday night's preseason game against the Bears as a precautionary move, knowing he would start in the regular-season opener ifLuck were not recovered from his ankle injury.

"At some level, we want to protect Jacoby anyway, to be honest with you,regardless of Andrew's status," Reich said Thursday.

"Because in theory, even if Andrew is playing Week 1, he still hasn't taken a lot of reps. So we're still going to protect Jacoby anyway."

Brissett was acquired from New England for Phillip Dorsett just before the 2017 season and is entering the final year of his contract.