The left-hander was due to start Monday night's game away to the Texas Rangers, which was postponed due to his death.

A statement on the Angels' website read: "It is with great sorrow that we report Tyler Skaggs passed away earlier today in Texas.

"Tyler has (been), and always will be, an important part of the Angels Family. Our thoughts and prayers are with his wife Carli and his entire family during this devastating time.

"There are no other details at this time, please keep Tyler's family in your thoughts and prayers." 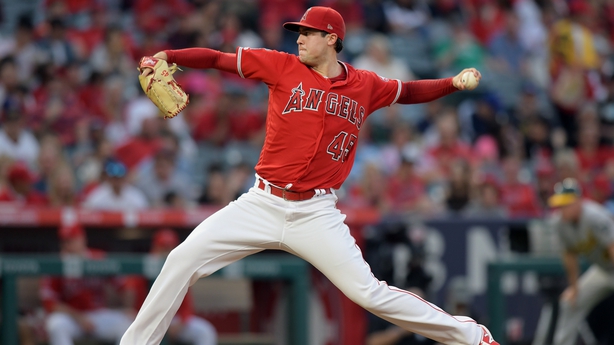 Skaggs had a 7-7 win-loss record this season and 28-38 for his Major League Baseball career, which began in 2012 with the Arizona Diamondbacks before he moved to LA in 2014.

A statement issued by MLB commissioner Rob Manfred read: "I am deeply saddened by today's tragedy in Texas. All of us at Major League Baseball extend our deepest condolences to Tyler's wife Carli, their family, their friends and all of his Angels team-mates and colleagues.

"We will support the Angels organisation through this most difficult period, and we will make a variety of resources available to Tyler's team-mates and other members of the baseball family."

The Diamondbacks said Skaggs "will always be remembered here as a great team-mate and wonderful young man," adding: "We are heartbroken with this tragic news."

A statement from the Angels' LA rivals the Dodgers read: "The Los Angeles Dodgers are deeply saddened to hear about the passing of Angels pitcher Tyler Skaggs. Our thoughts are with Skaggs' family, friends and the @Angels organization."

Other MLB players and teams also expressed their condolences after the news emerged.

Fellow Angels pitcher Parker Bridwell tweeted: "I can't believe this, my heart and prayers go out to his wife and family! We lost an amazing human being. Rest In Peace brother."

The Cleveland Indians' Trevor Bauer added: "We came up together. We won together. We laughed and celebrated together. Today, we all lose and mourn together. Your memory, your love for life, everything that made you, you, will live forever in the hearts and minds of those who knew you. Rest In Peace brother. We love you."

The Colorado Rockies and Oakland Athletics both said they were "deeply saddened".

"Our thoughts, prayers and condolences are with Tyler's family, friends, fans, and the Angels organization," the Rockies said on Twitter.

The Athletics added: "We appreciated his determination and demeanor on the field and will miss him as a competitor and friend. Our condolences to Tyler's family and the Angels organization."

The Southlake Police department in Texas revealed Skaggs was found unconscious and unresponsive in his hotel room.

A statement read: "This afternoon at 2:18pm, the Southlake Police Department responded to a call of an unconscious male in a room in the Hilton hotel at 1400 Plaza Place. Officers arrived and found the male unresponsive and he was pronounced deceased at the scene.

"The deceased has been identified as Tyler Skaggs, 27, of the Los Angeles Angels baseball team.

"At this time, no foul play is suspected."