Nick Foles completed 25 straight passes as the reigning Super Bowl champions the Philadelphia Eagles made it through to the NFL play-offs.

The Eagles needed to win - and the Minnesota Vikings to lose - to secure football in January and their defence ensured the hopes remained alive with an emphatic 24-0 win over the Washington Redskins.

The Redskins only managed 89 yards all game as Foles threw for two touchdowns before coming off injured.

There was an anxious wait for the Eagles as the Vikings and Chicago Bears were still playing, but the Bears prevailed 24-10 for the Eagles to take the sixth seed in the NFC.

The Baltimore Ravens survived a scare to win the AFC North with a 26-24 victory over the Cleveland Browns.

The Pittsburgh Steelers were in prime position to take the AFC North title if the Ravens slipped up after defeating the Cincinnati Bengals 16-13.

But the Ravens halted a last-minute drive from the Browns to seal the win and the division title.

In the win-and-in clash between the Indianapolis Colts and Tennessee Titans, Andrew Luck had three touchdowns and 285 yards as the Colts prevailed 33-17 to become the AFC sixth seed.

With their play-off position already secure, the New Orleans Saints (13-3) were beaten 33-14 by the Carolina Panthers at the Mercedes-Benz Superdome.

Kyle Allen threw for two touchdowns and 228 yards and rushed for another score as the Panthers (7-9) ended their season on a winning note. The Saints did not get on the scoreboard until the fourth quarter.

The Los Angeles Rams will be the NFC second seed, after Brandin Cooks and Josh Reynolds caught a pair of touchdown passes each in a 48-32 win over the San Francisco 49ers. 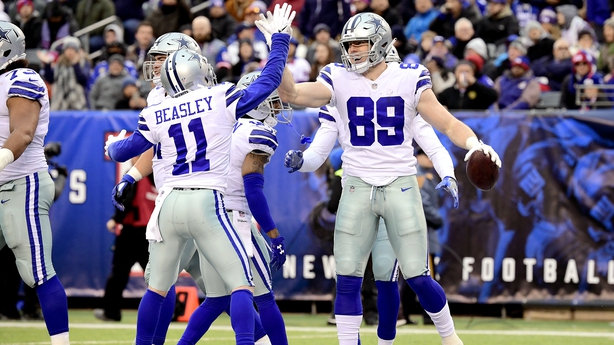 The Dallas Cowboys (10-6) made certain of the NFC East title by snatching a dramatic 36-35 victory over the New York Giants at the MetLife Stadium.

Cole Beasley claimed the crucial touchdown late in the game after an initial call of incomplete against his catch was overturned.

They will play the Seattle Seahawks who beat the Arizona Cardinals 27-24, with a Sebastian Janikowski field goal sealing the win.

In the AFC, the Kansas City Chiefs sealed top seed with a 35-3 demolition of the Oakland Raiders, while the New England Patriots secured a bye in the first round of the NFL play-offs as they wrapped up their regular season campaign with a 38-3 victory over the New York Jets.

The Houston Texans (11-5) finally wrapped up the AFC South title with a 20-3 win over the Jacksonville Jaguars at NRG Stadium after losing two of their previous three games.

The Texans struck the decisive blows in the first half with rushing touchdowns for Deshaun Watson and Lemar Miller helping seal a third division title in four seasons.

The Los Angeles Chargers complete the AFC picture after beating the Denver Broncos 23-9.

There was nothing to play for in play-off terms in the other games played early on Sunday.